In the mid-1990s when efforts to counteract smoking and its promotion were in the news almost every week, I realized that one of the main reasons the tobacco industry was constantly on the defensive was because it had become the butt of ridicule from the nation’s newspaper editorial cartoonists. The zealous anti-smoking movement–in which I was heavily involved–also needed a bit of lightening up.

In that pre-internet era, I made weekly visits to the Houston Public Library to scour the editorial pages of newspapers from across the country for cartoons on smoking, as well as to SuperStand, a magazine store that carried over 40 different Sunday newspapers. I managed to collect several hundred cartoons, and I corresponded with nearly every one of the then-130 editorial cartoonists in the country to ask about acquiring their original artworks. I also joined the Association of American Editorial Cartoonists (AAEC) as an associate member and was invited to speak at its annual convention in 2001.

As a result of the AAEC cartoonists’ support for my research, this exhibition, featuring the original drawings of over 70 editorial cartoonists, debuted three years later at the opening reception of the AAEC convention at the Ann Tower Gallery in Lexington, Kentucky (April 9-May 4, 2004), before going to the Alabama Museum of Natural History in Tuscaloosa (August 26-October 31, 2004), the Artworks Gallery in Seattle (April 7-30, 2005, sponsored by King County Public Health Department’s Art Patch Project [directed by Roger Valdez] to enlist artists to counteract the use of musicians in tobacco industry-sponsored concerts), the Alabama Museum of the Health Sciences at the University of Alabama at Birmingham (September 22, 2005-January 31, 2006), the National Museum of Health and Medicine in Washington, DC (April 1, 2006-March 31, 2007, hosted by museum director Dr. Adrianne Noe), the rotunda of the Nebraska state capitol in Lincoln (April 9-22, 2007, hosted by editorial cartoonist Paul Fell), Buffalo-Niagara International Airport (May 1-21, 2007), Roswell Park Cancer Institute, Buffalo, New York (May 22-June 30, 2007, hosted by Dr. Mike Cummings and Julia Purpera), the National Conference on Tobacco or Health in Minneapolis (October 24-26, 2007), and the Texas Medical Center Library in Houston (January 2008, sponsored by the John P. McGovern Historical Collections and Research Center). Lori Jacobi, MA, the Center’s collection manager from 2002-2009, oversaw the complex logistics of the touring exhibition from 2004 to 2008.

The pins on this map will take you to pages dedicated to various venues that hosted “Cartoonists Take Up Smoking.” 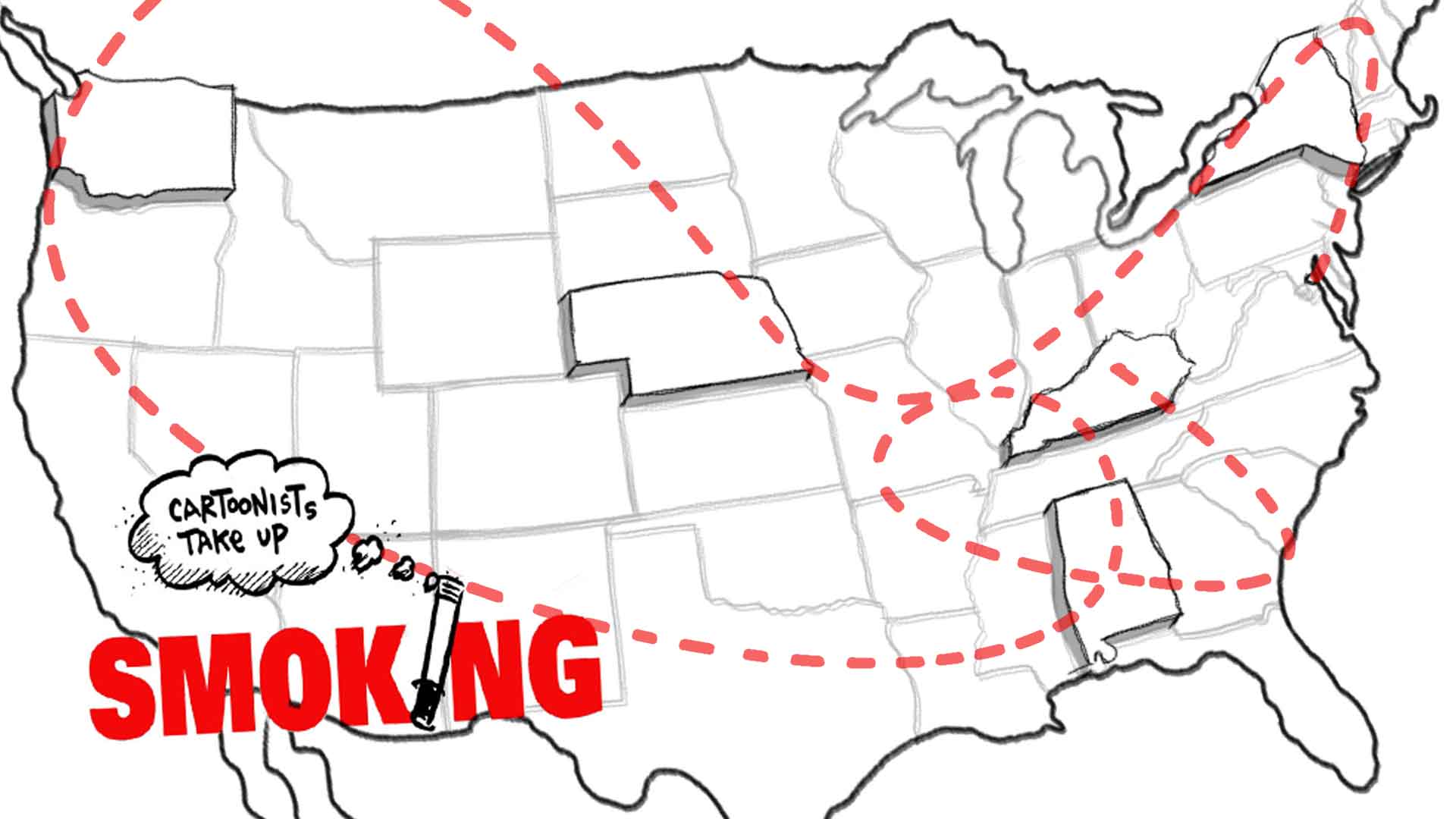