In 1993, Bill Clinton proclaimed himself the first anti-smoking President.  First Lady Hillary Clinton made the White House smoke-free. The tobacco industry’s staunchest advocate in Congress from 1973 to 2003 was North Carolina Republican Senator Jesse Helms, who helped stymie most legislative efforts to strengthen regulations on tobacco products. In the House of Representatives, Richmond, Virginia Representative Thomas Bliley, who served from 1980 to 2001, was known as the Congressman from Philip Morris. California Democratic Representative Henry Waxman, who served from 1975 to 2015, and Massachusetts Democratic Senator Ted Kennedy, who served from 1962 to 2009, were two of the only elected officials who included tobacco control among their top issues.

Cigarette manufacturers have long been major contributors to both the Republican and Democratic parties, as well as to the pet charities of legislators, such as Kansas Republican Senator Bob Dole’s Foundation for Employment of People with Disabilities. During his 1996 presidential campaign, Dole famously downplayed the dangers of smoking. “We know it’s [tobacco] not good for kids,” he said, “but a lot of other things aren’t good…Some would say milk’s not good.” 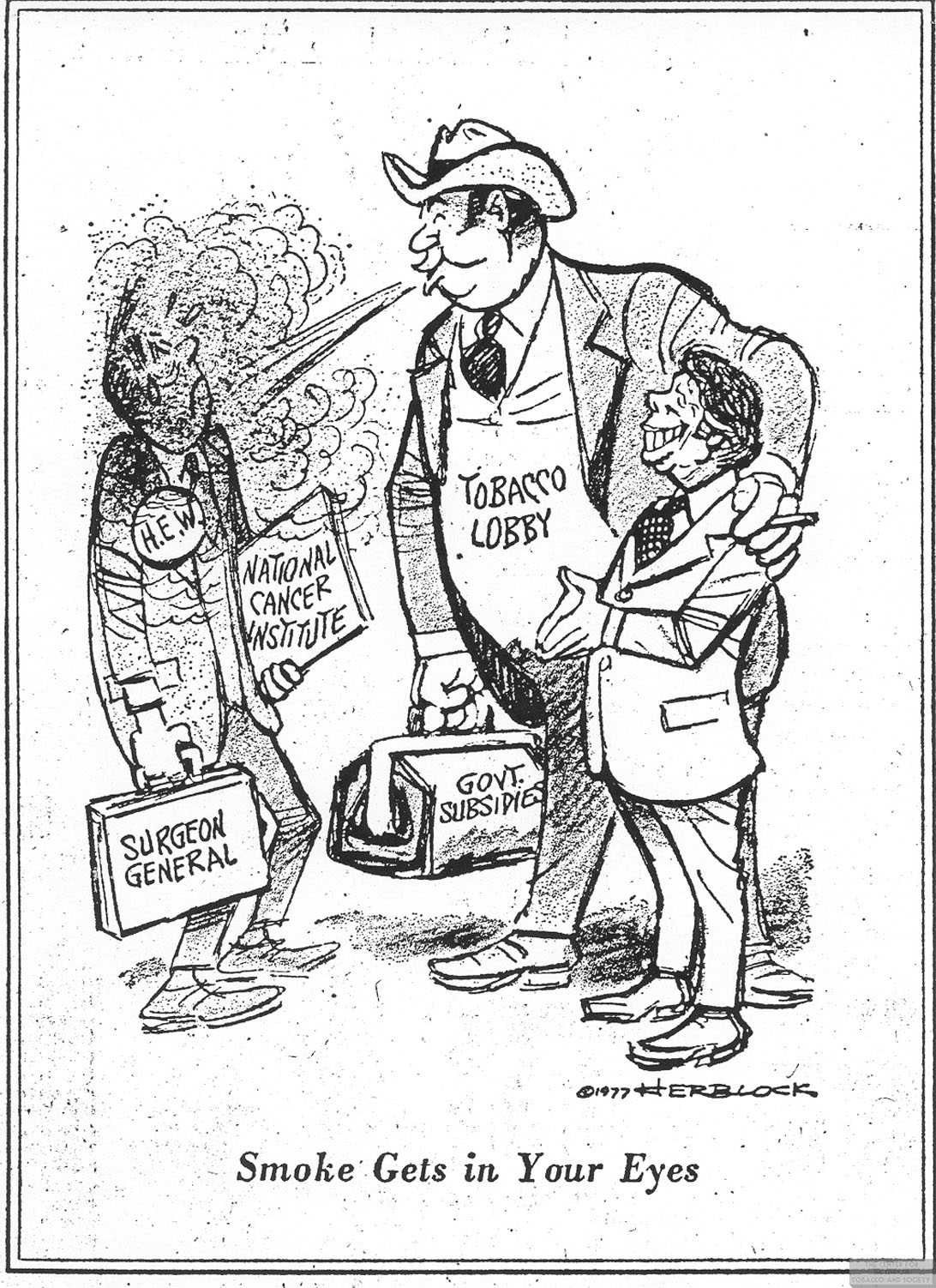 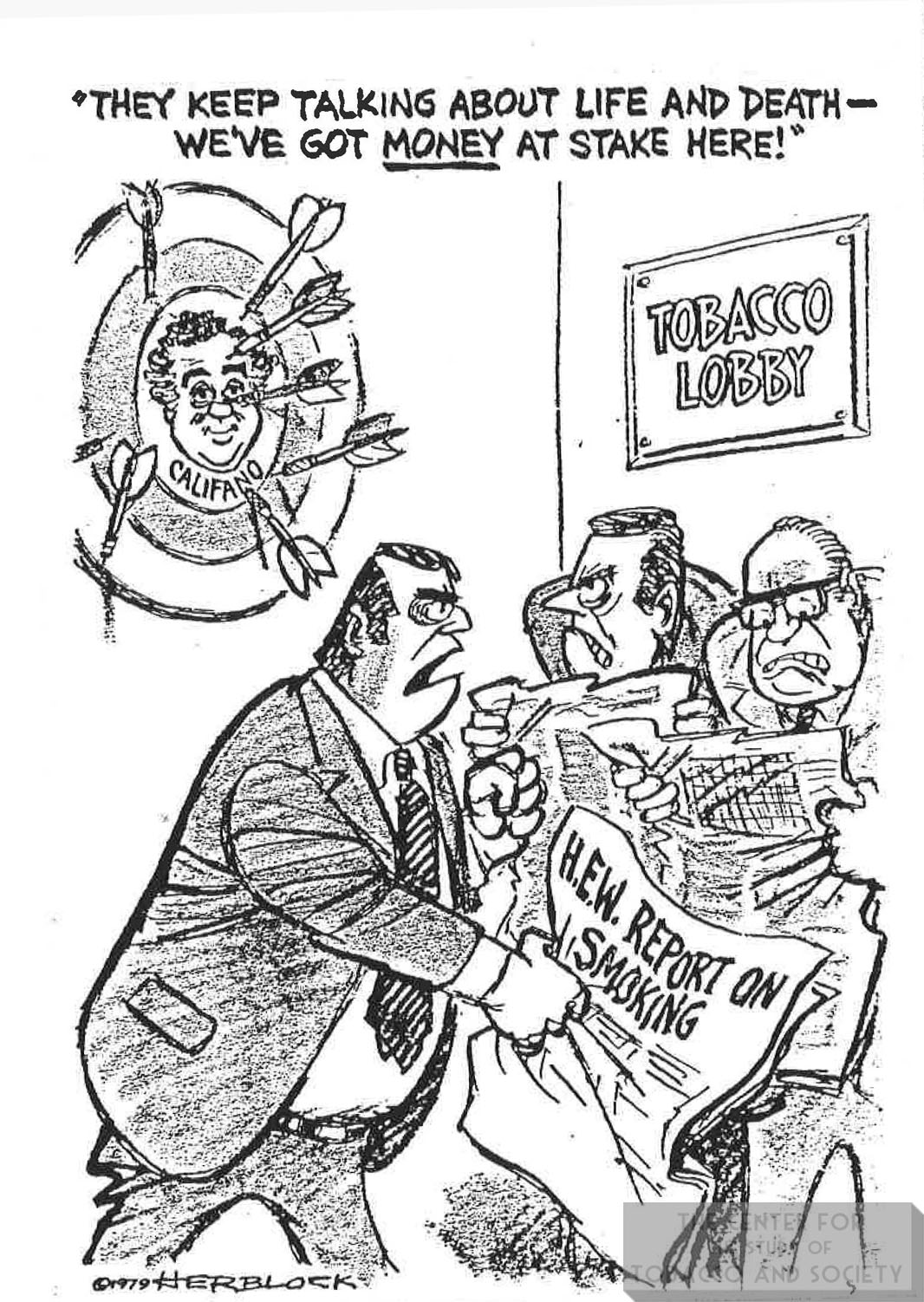 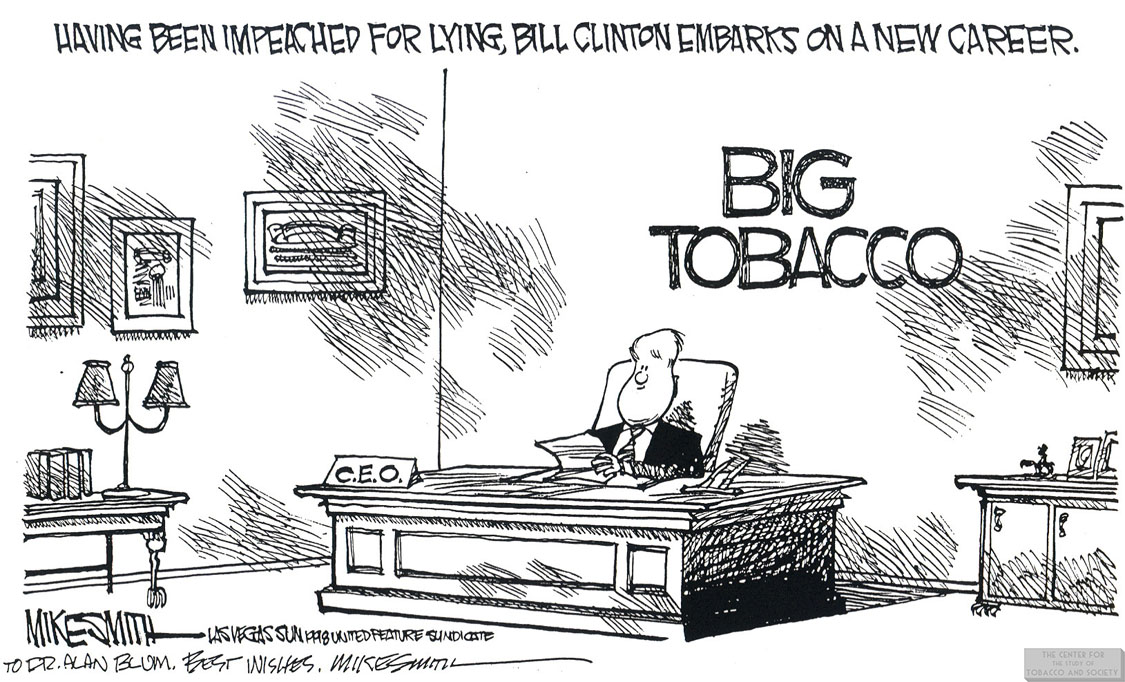 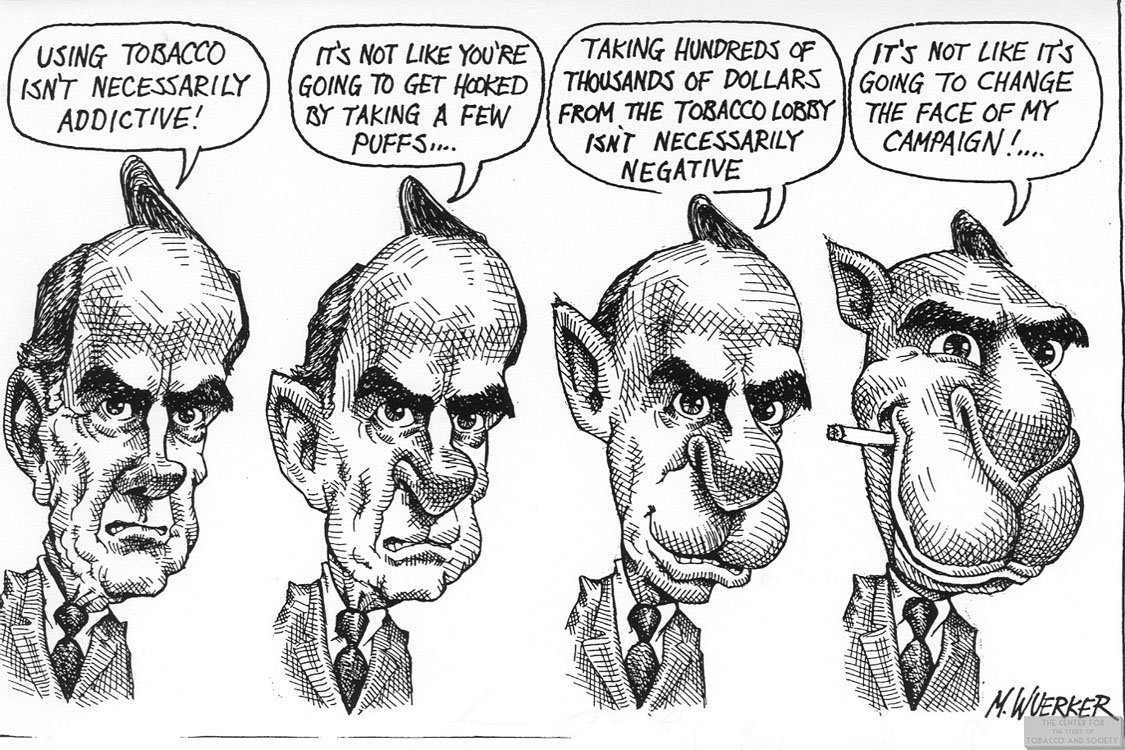 “It’s not about the stupid old plant to me. It’s about the insanity of advertising and marketing, the evil genius of Joe Camel. Just imagine what could be accomplished by shifting the billions of bucks we spend pushing cigarettes to a campaign for a ‘Robbie-get-off-my-lard-ass-and-get-some-damn-exercise-Racoon’ or a “Skinny Eddie-ditch-the-junk-food-Squirrel.’” 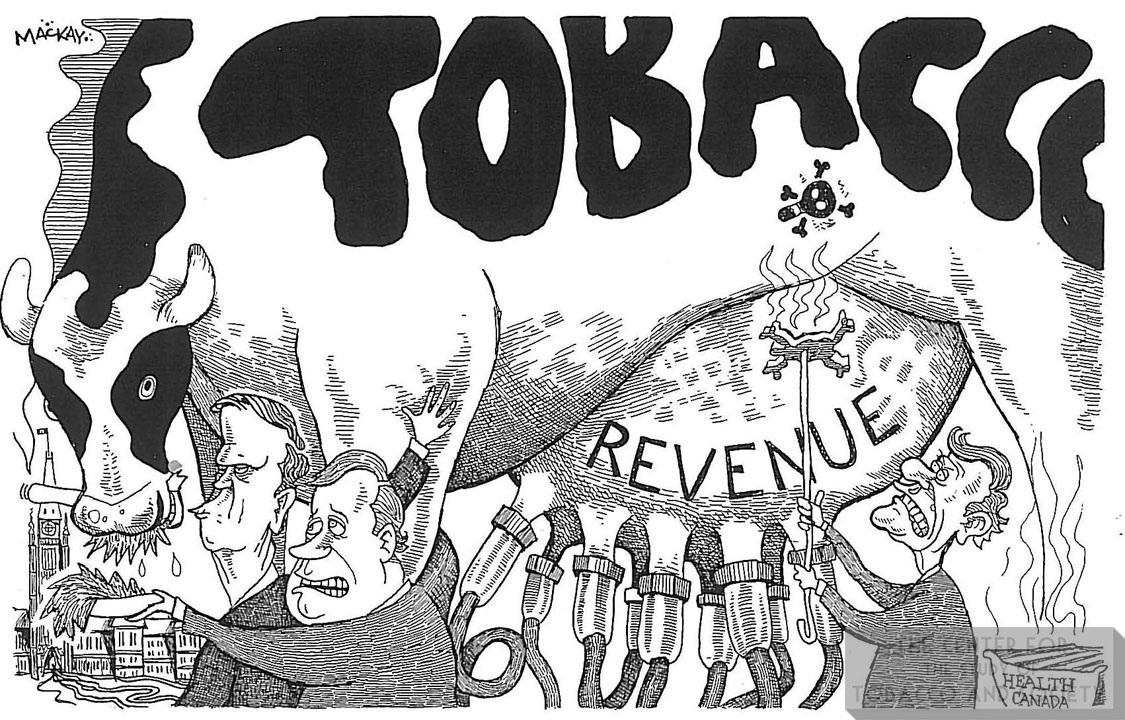 “This cartoon shows both the Prime Minister and the Finance minister of Canada stroking and nourishing the tobacco cow as it is being milked for its precious revenues. Meanwhile, it’s the Health Minister of the day whose role is to brand the great money maker as dangerous to the health of Canadians.” 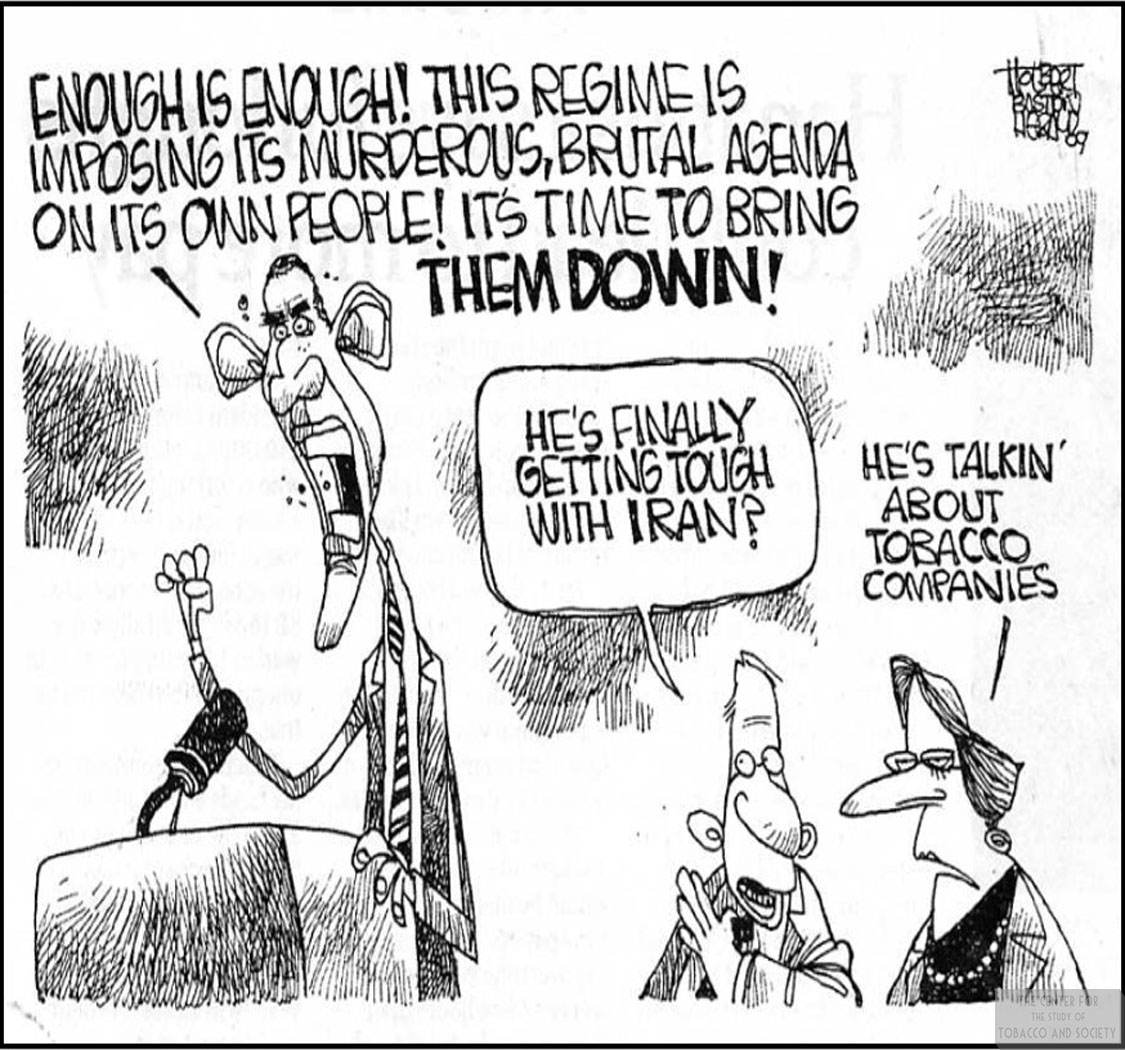 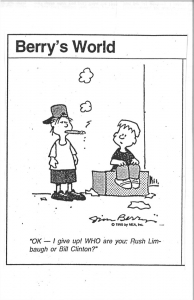 “A funny thing happened to me one time. I had created a couple of anti-smoking cartoons, and I got a call from Dr. Luther Terry, the Surgeon General, who asked me whether I’d like to illustrate a book he was working on. He invited me to come down to the University of Pennsylvania. We discussed the project and then went over to the faculty dining room. After we finished lunch, he pulled out a pipe and smoked it! I’d quit smoking around that time because I wanted to be a role model for my two sons. Incidentally, the book deal never went through.” 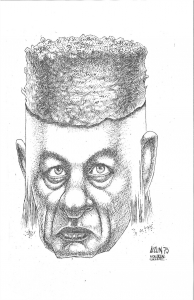 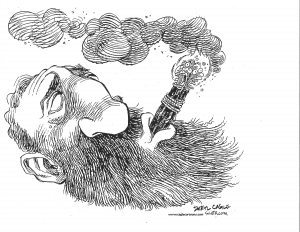 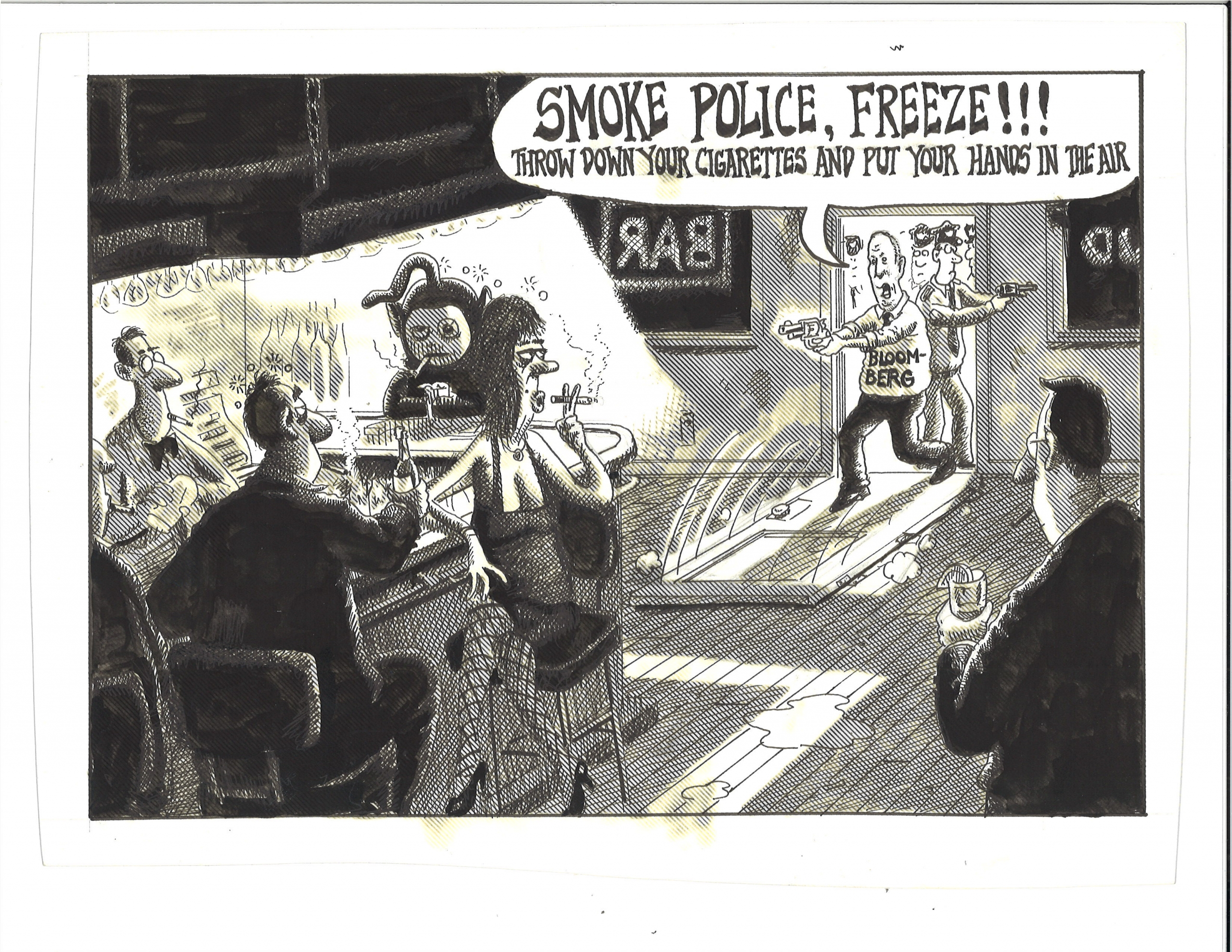