Throughout the 20th century, candy cigarettes, cigars, and chewing tobacco products were sold in stores across the nation in packs identical to the real ones, and children were even pictured in cigarette advertisements in magazines for Philip Morris (“Gee, Mommy, you sure enjoy your Marlboro!” in the 1940s and 1950s) and Liggett & Myers’s L & M in the 1960s (in a series of images of family milestones such as a boy being fitted for his first suit, as his proud father looks on while puffing on his cigarette [“When a cigarette means a lot…”]). (See the Center’s exhibition, “Kids, Candy, n’ Cigarettes”.) Beginning in the 1950s, children were exposed to cigarette commercials day and night on TV. After Congress banned such commercials effective January 1, 1971, tobacco advertisers circumvented the ban by sponsoring sporting events in stadiums, arenas, and racetracks with prominent cigarette billboards that could be seen on TV. Auto racing also featured cigarette brand logos on racecars and on drivers’ uniforms and helmets. By the 1980s, video games popular among teenagers such as Pole Position and Super Monaco GP featured the same cigarette brand logos as in the real races. 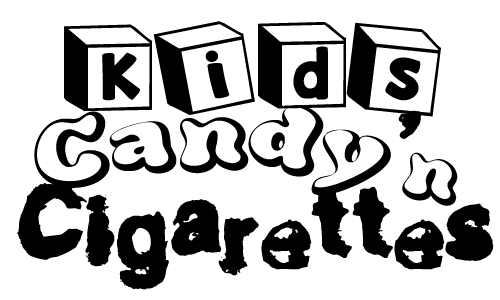 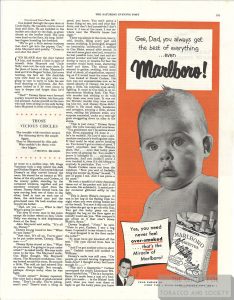 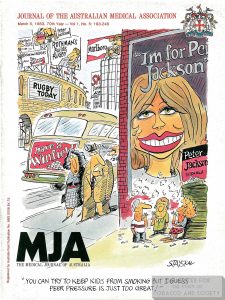 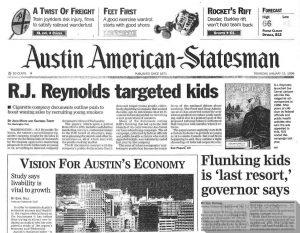 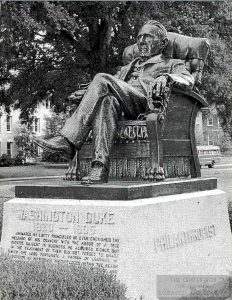 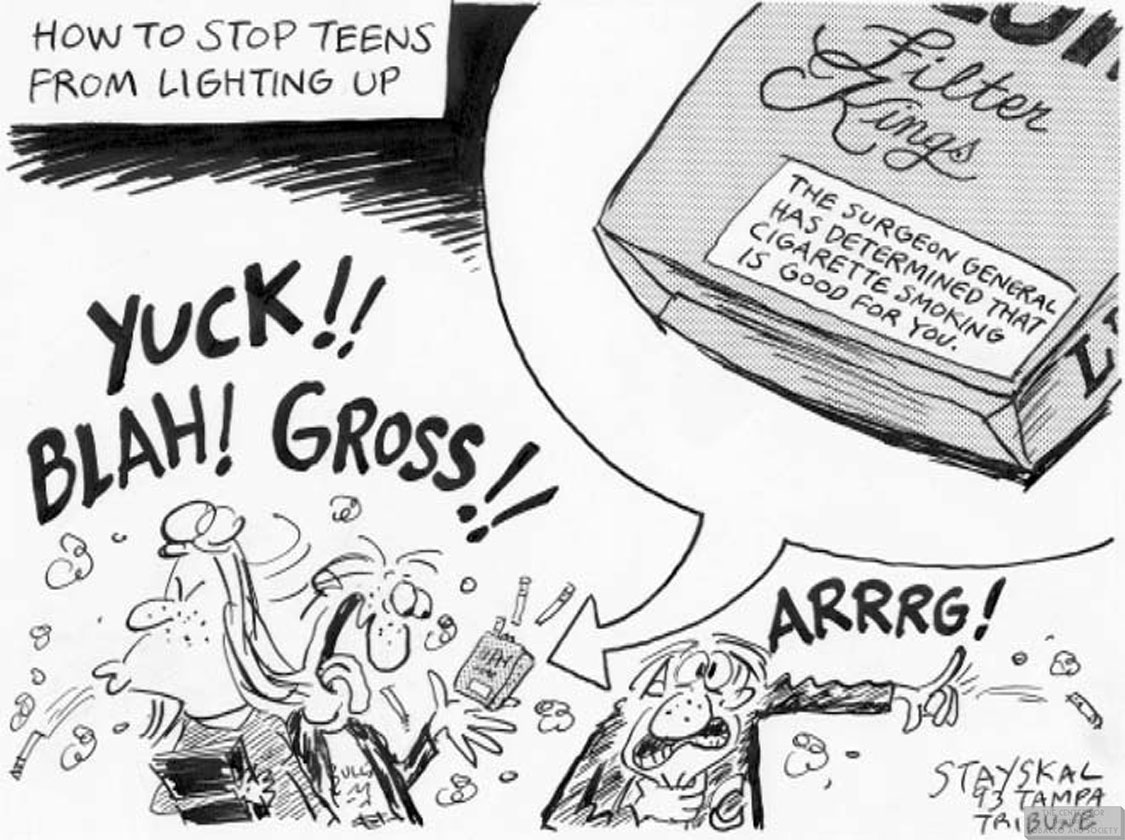 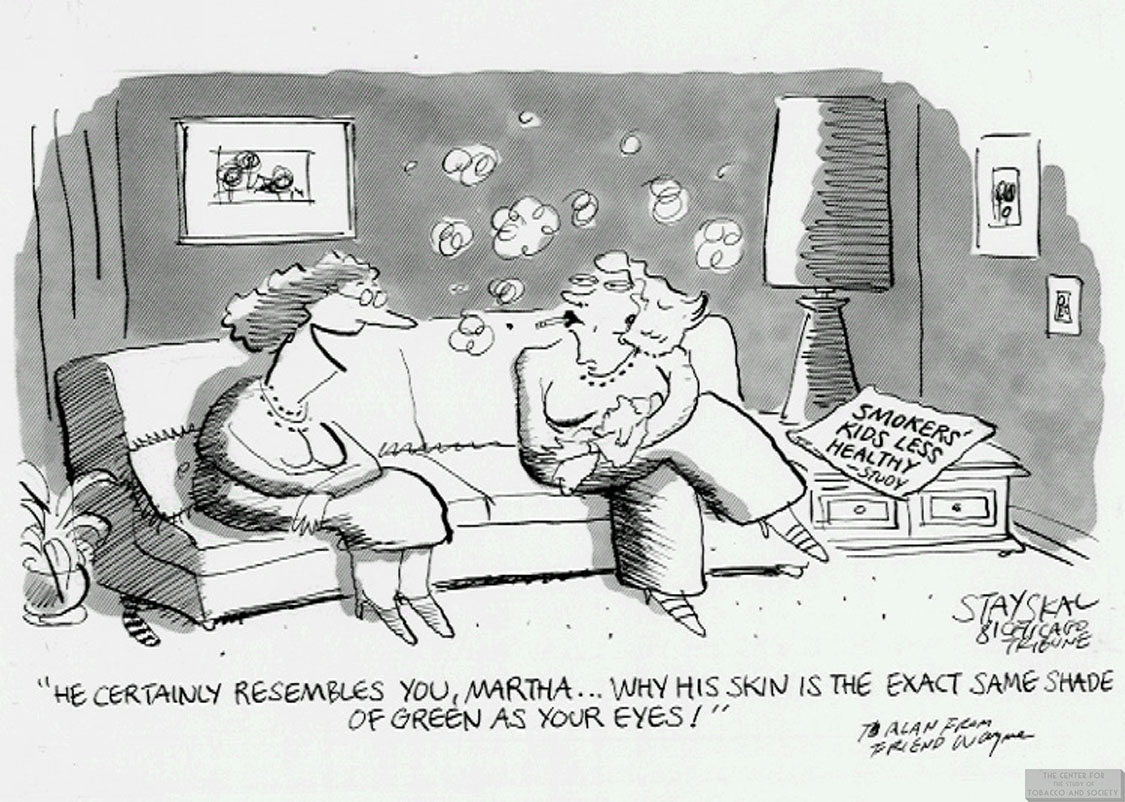 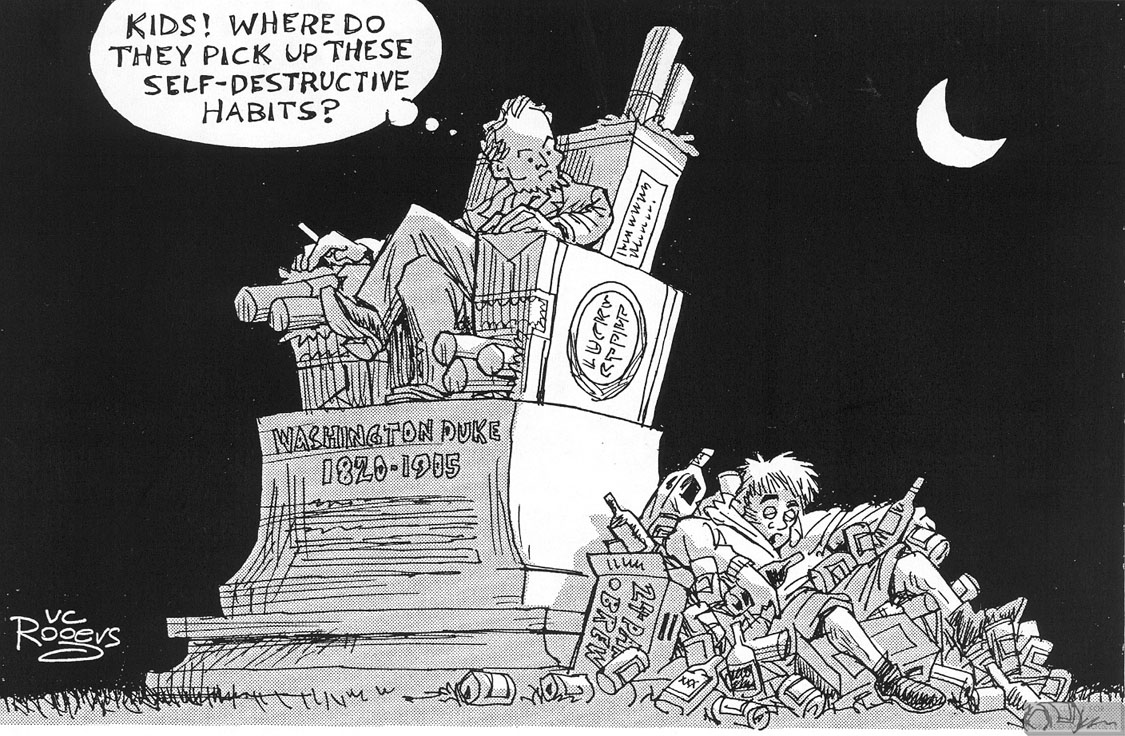 “I drew this cartoon in February 2000 when Duke University in Durham was cracking down on student drinking. The seated figure is American Tobacco Company founder Washington Duke, whose son James B. Duke endowed the University. The elder Duke’s likeness sits in that very pose on campus, though the real statue’s chair is not made of cigarette packs.” 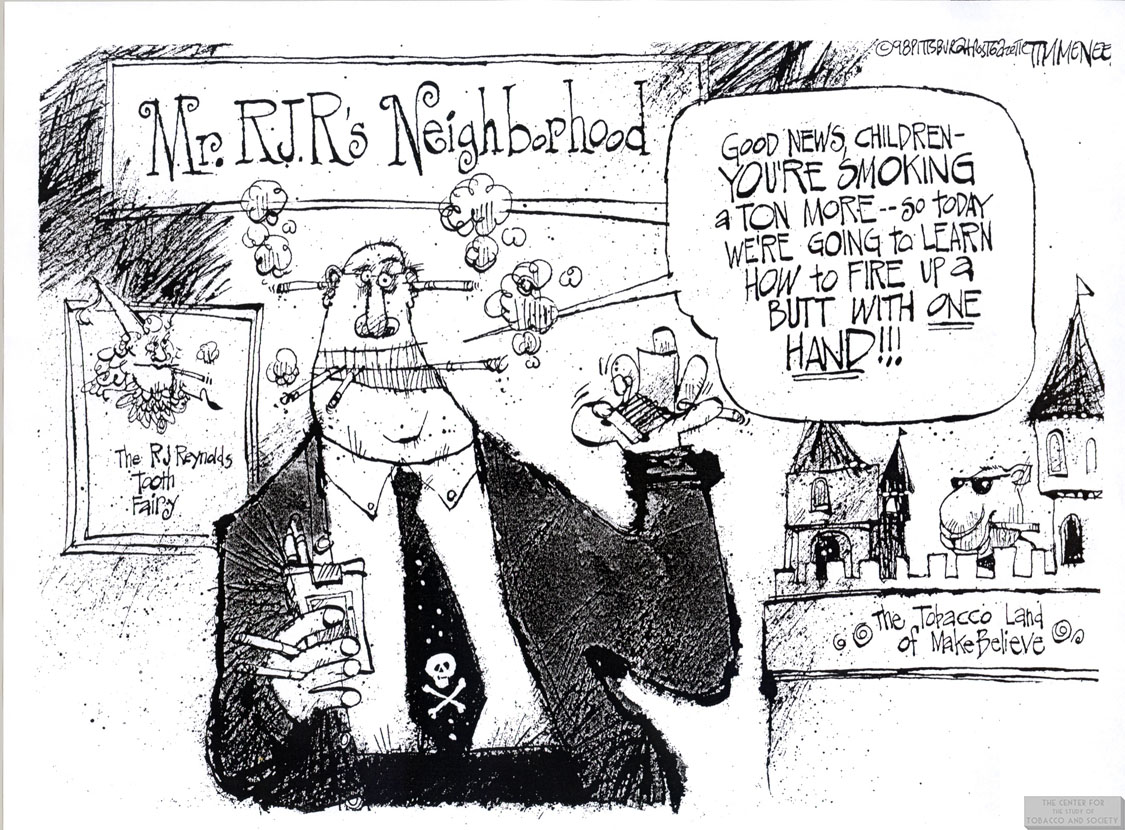 “I started smoking cigarettes in 1956, when I was playing Little League. I quit in 1971 as an anniversary present to my wife. Cold turkey. No patch, no gum, no nothin’. Big Tobacco’s landed in well-publicized and much deserved trouble several years later so what remains troubling is why more smokers can’t quit—and why kids start. Don’t they see the retirees in the supermarket, their noses tethered to oxygen canisters? But then kids, besides being blind, are bullet proof. OK, full disclosure: I still puff on an occasional cigar—but so did George Burns, and he hit 100.”
~ Tim Menees 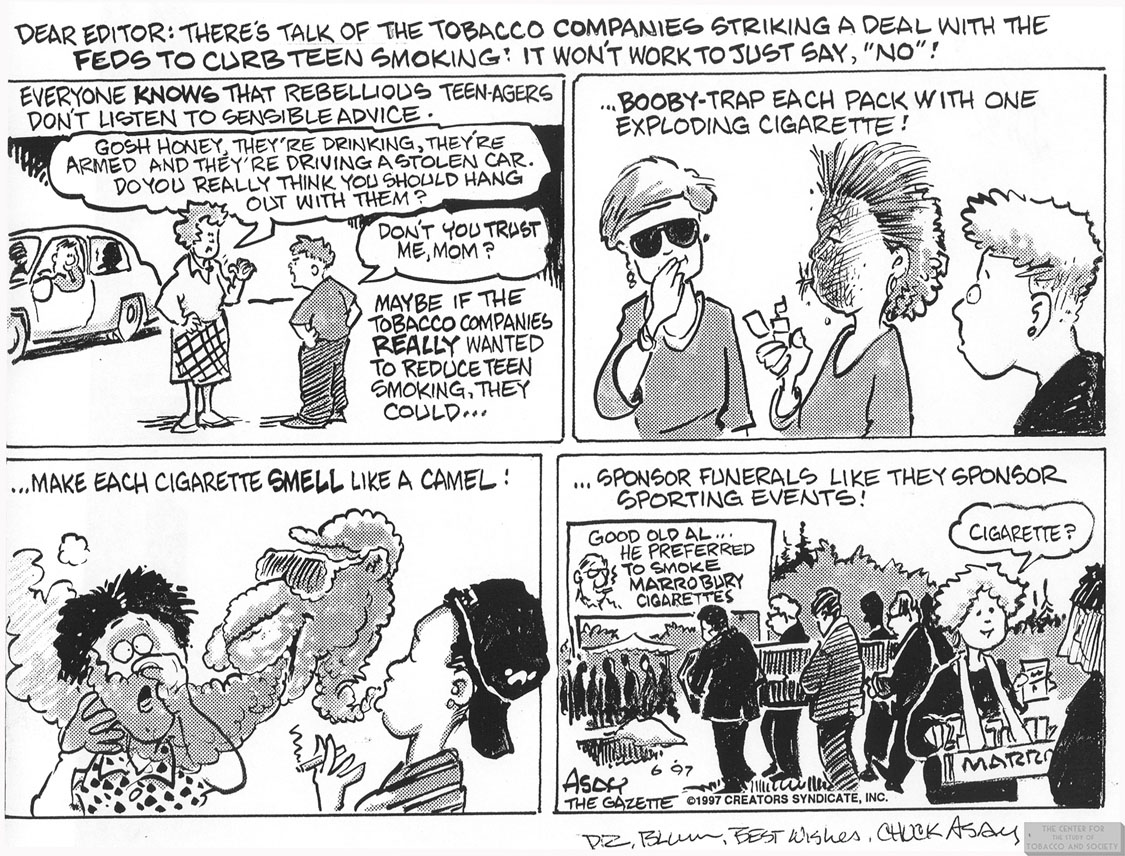 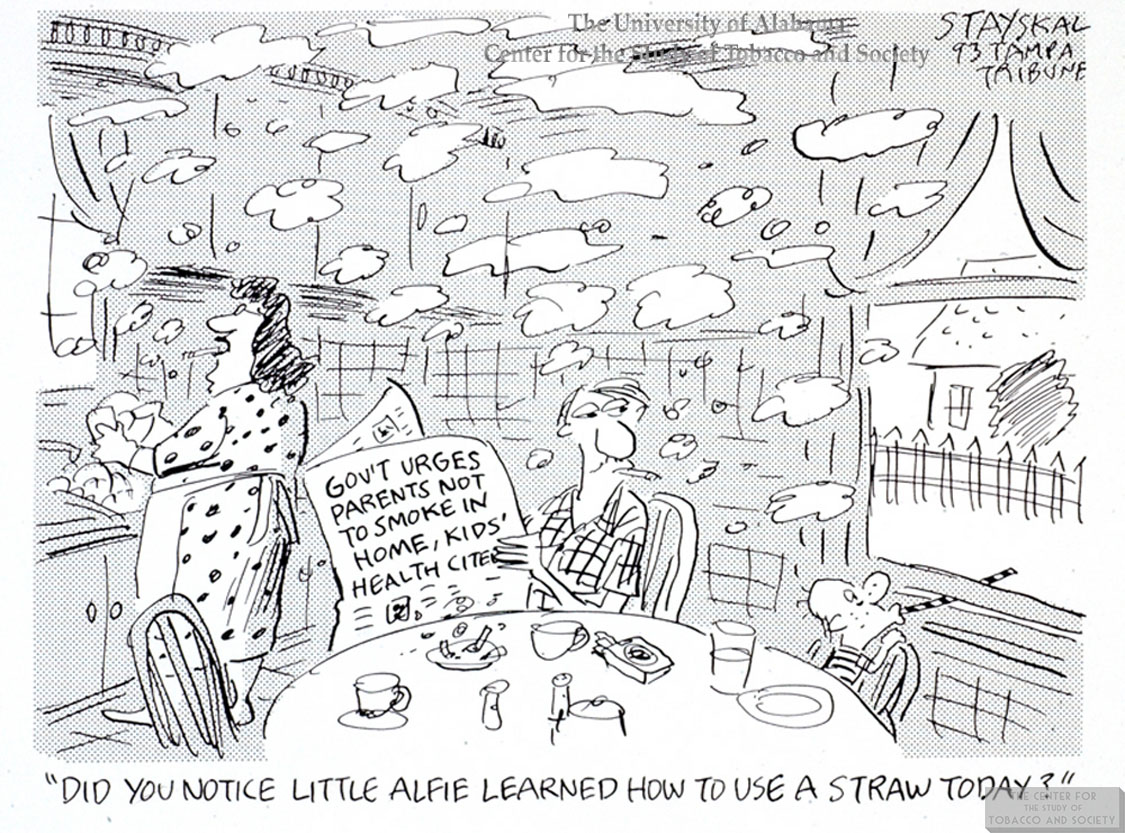 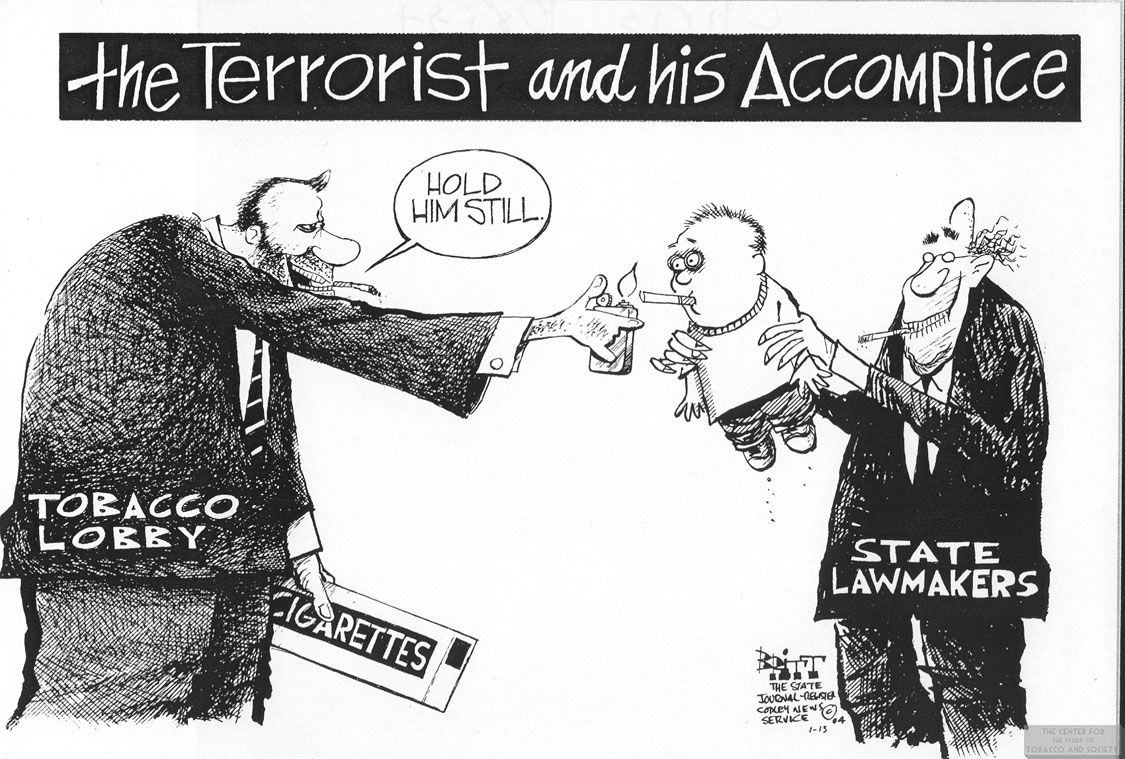 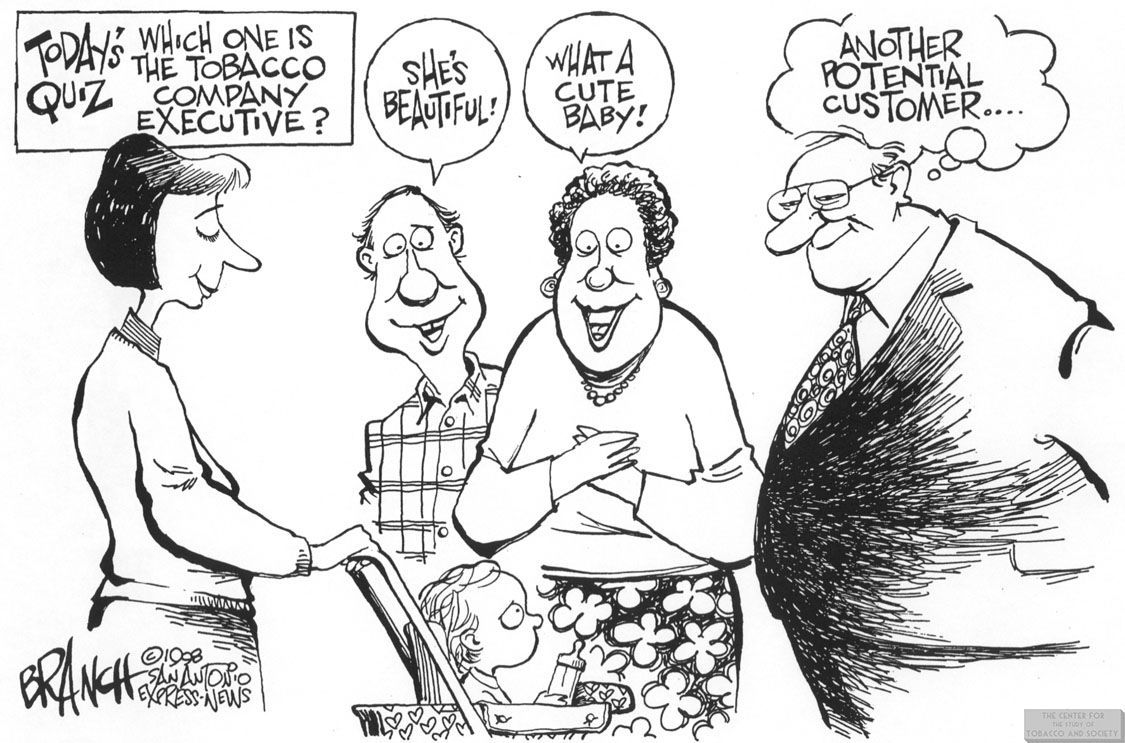 “My father died of lung cancer in 1977. I will never forget the sound of him laboring for every breath; I could hear it from the hallway as I approached his hospital room. I hear it every time I draw a tobacco-related cartoon.” 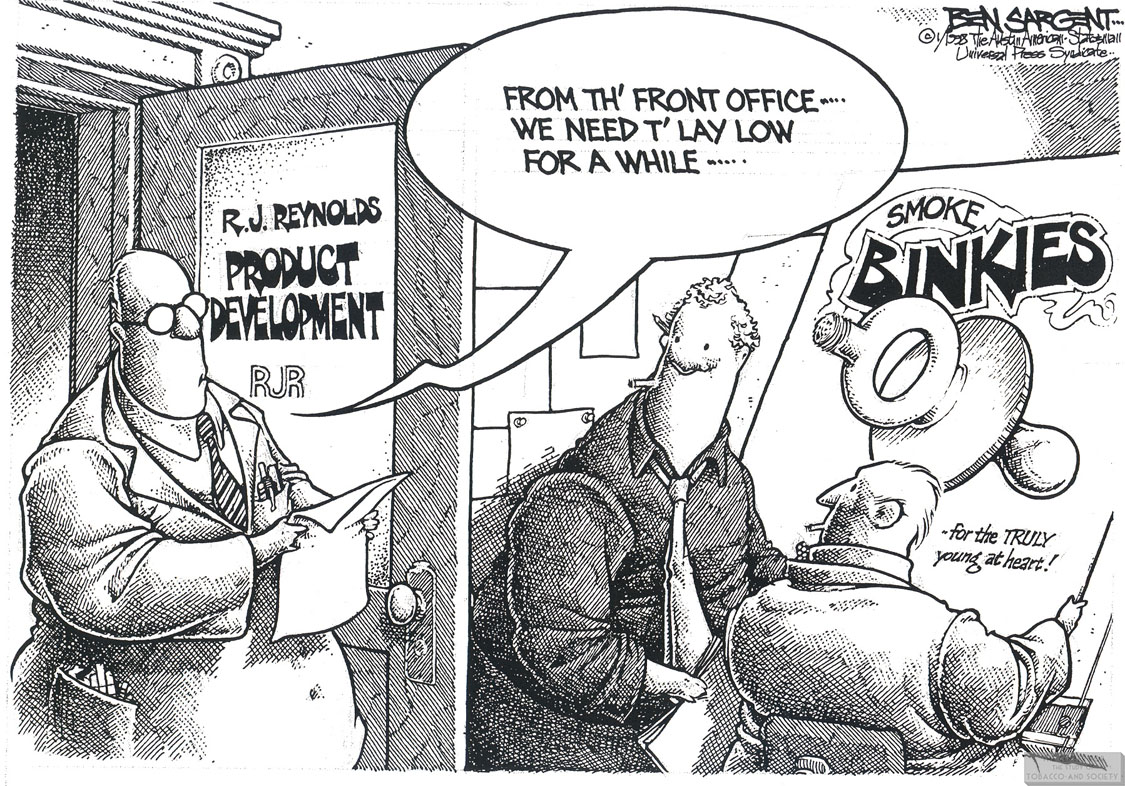 “The vast worldwide organizations that supply other addictive substances must be envious of the global clout, reach and marketing flexibility the cigarette narcotraficantes enjoy. If your adult market starts drying up, you can go after kids; if that starts drying up, you start selling ’em overseas. It’s the best racket yet.”