Even after cigarette advertising was banned By Congress from TV and radio in 1971, cigarettes remained the most advertised product in magazines and newspapers, on billboards, and in stadiums with televised sporting events. In the 1980s, more than $2.7 billion was spent each year in the US by the six major tobacco companies to promote cigarette smoking. Such advertising created social acceptability for the product and helped reinforce complacency of those who did not smoke.

Some public health leaders never criticized the tobacco industry for promoting cigarette smoking to the youth market because by the mid-1980s cigarette makers were acquiring major food companies, such as RJ Reynolds’ buy-out of Nabisco in 1985 and Philip Morris’ take-over of General Foods in 1985 and KRAFT in 1988. Those who supported such diversification reasoned that this could expedite the phasing out of cigarettes while giving the tobacco industry an opportunity to replace lost revenue.

This belief was misguided. Cigarettes remained by far the highest source of profit for tobacco companies. Whereas cigarettes accounted for 70.9% of the net sales of Philip Morris, they accounted for 93.8% of the company’s total profit. For Loews, whose Newport and Kent cigarette sales by its Lorillard subsidiary were 25.5% of total revenue, cigarettes accounted for 64.4% of the company’s total profit. Another kind of diversification by cigarette makers was the acquisition of non-tobacco product subsidiaries in non-tobacco-growing states. Executives of these seemingly disinterested and unrelated companies then took the lead in the local business community in opposing legislative restrictions on public smoking or tobacco advertising. This occurred in San Francisco with RJ Reynolds’ Del Monte Foods subsidiary and in New York City with Philip Morris’ Seven-Up Bottling Company.

Diversity of holdings of the tobacco industry dovetailed with the network of supporting industries and services. These include farmers, tobacco distributors, food stores, drug stores, shipping companies, and port authorities that are involved in the transport of tobacco, flavoring manufacturers, banks and transfer agents, chemical companies that manufacture herbicides and pesticides, and paper, filter, and packaging manufacturers.

Although diversification by the tobacco industry (which began in the 1950s following the early scientific reports indicting smoking as a cause of lung cancer) has been profitable, the proportion of profit from the sale of cigarettes has always been the foundation or these companies. Even in instances in which diversification was not profitable–as in the case of Philip Morris’ Miller Brewing Co.–the high visibility and large advertising budgets on television (where cigarette ads are banned) for the beer and food products made by these companies helped insulate cigarette profits by buying immunity from negative TV news stories. When RJ Reynolds purchased Nabisco Brands for $5 billion, the company became the leading national advertiser, spending $1 billion a year in the mass media. 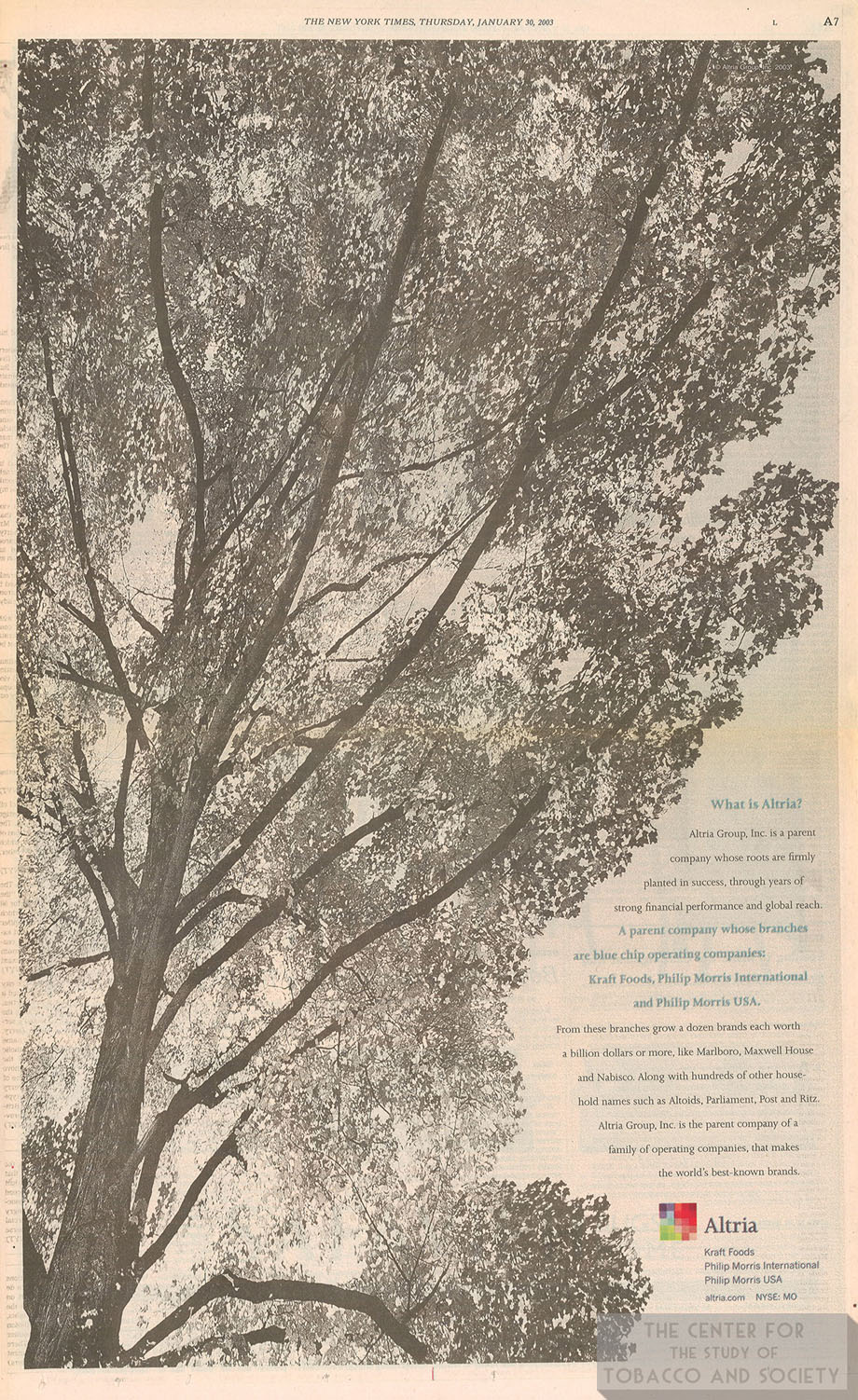 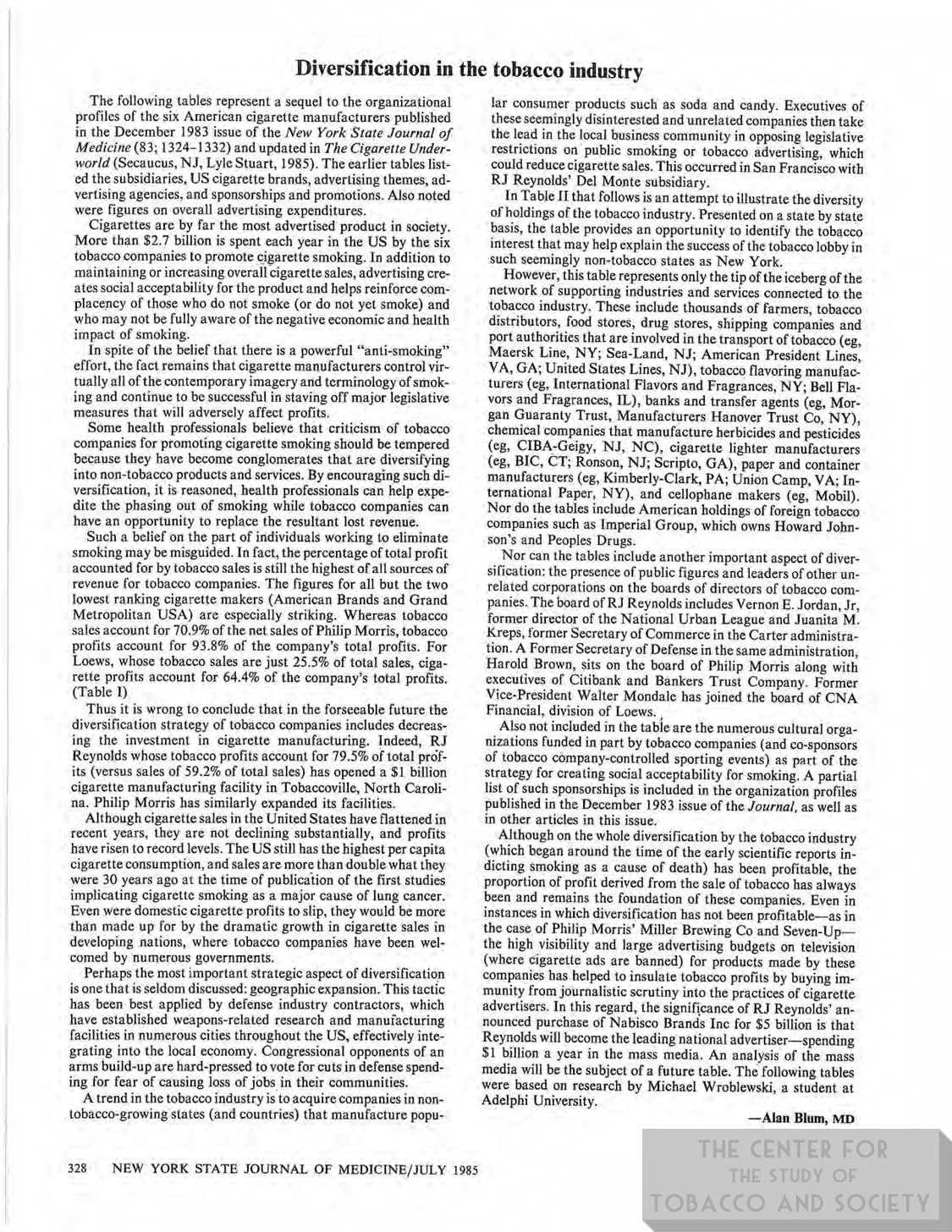 “Diversification in the tobacco industry” 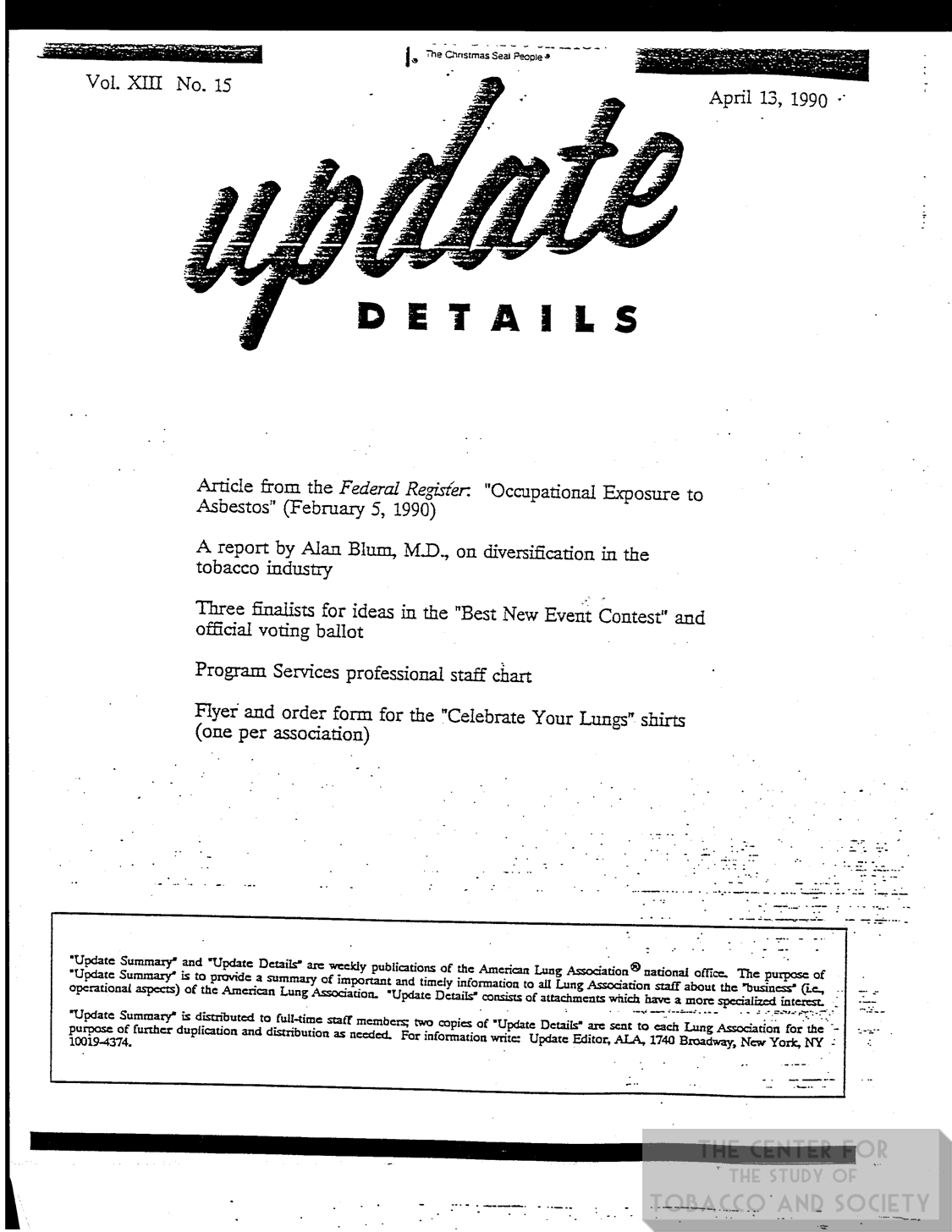 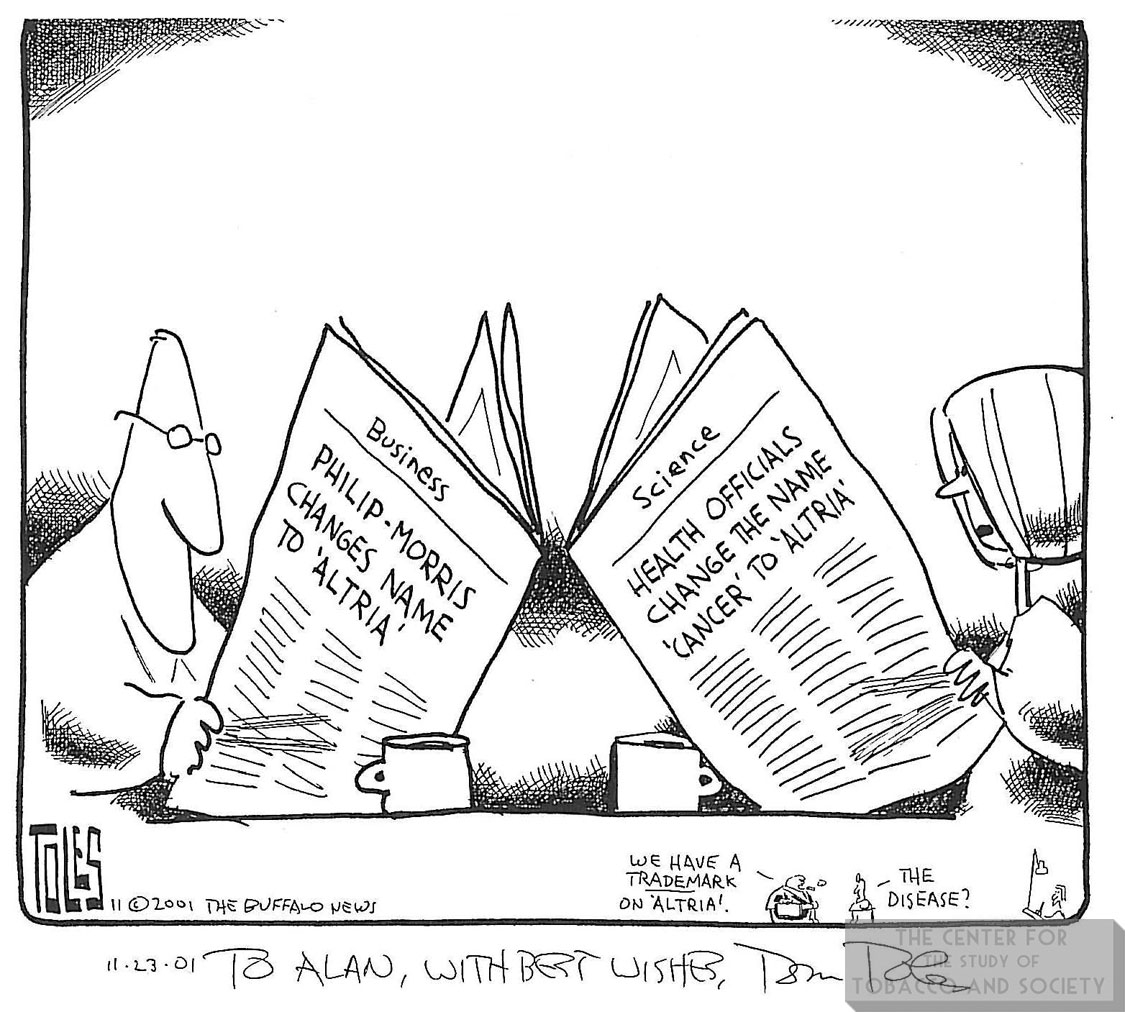 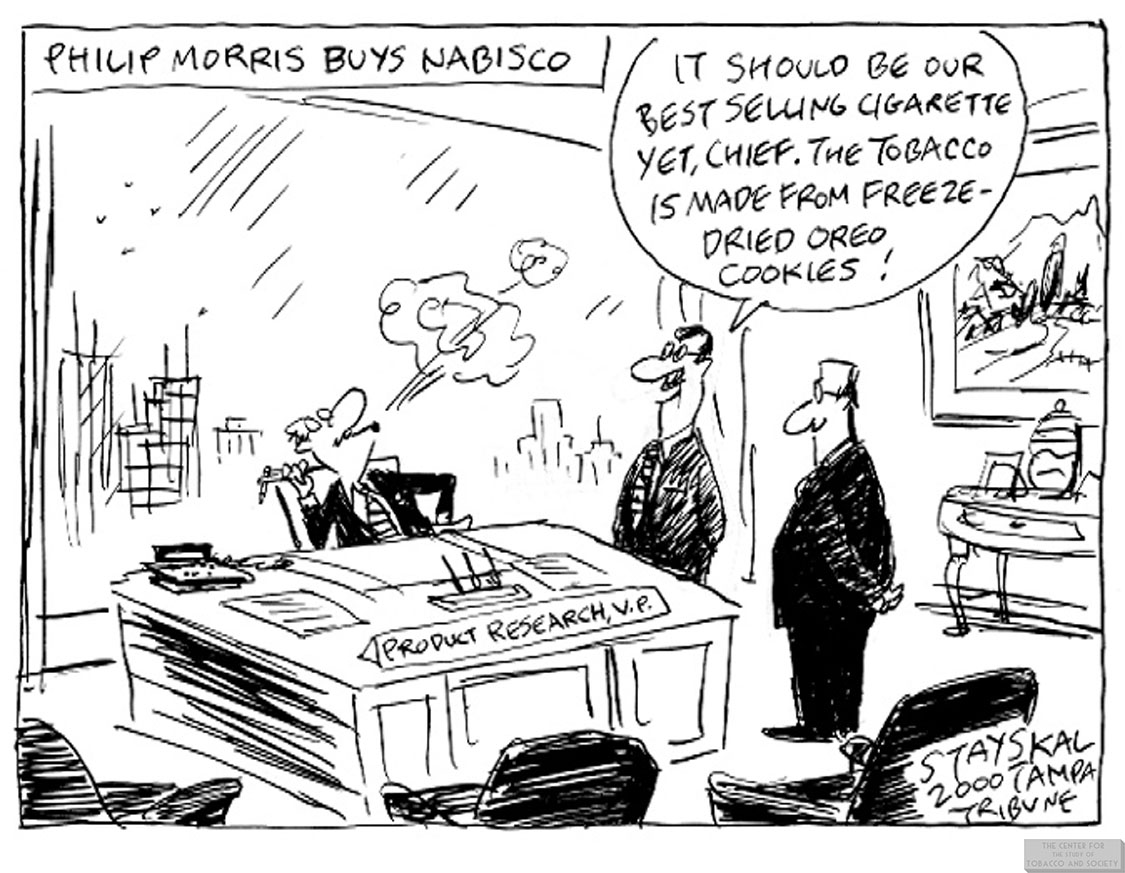 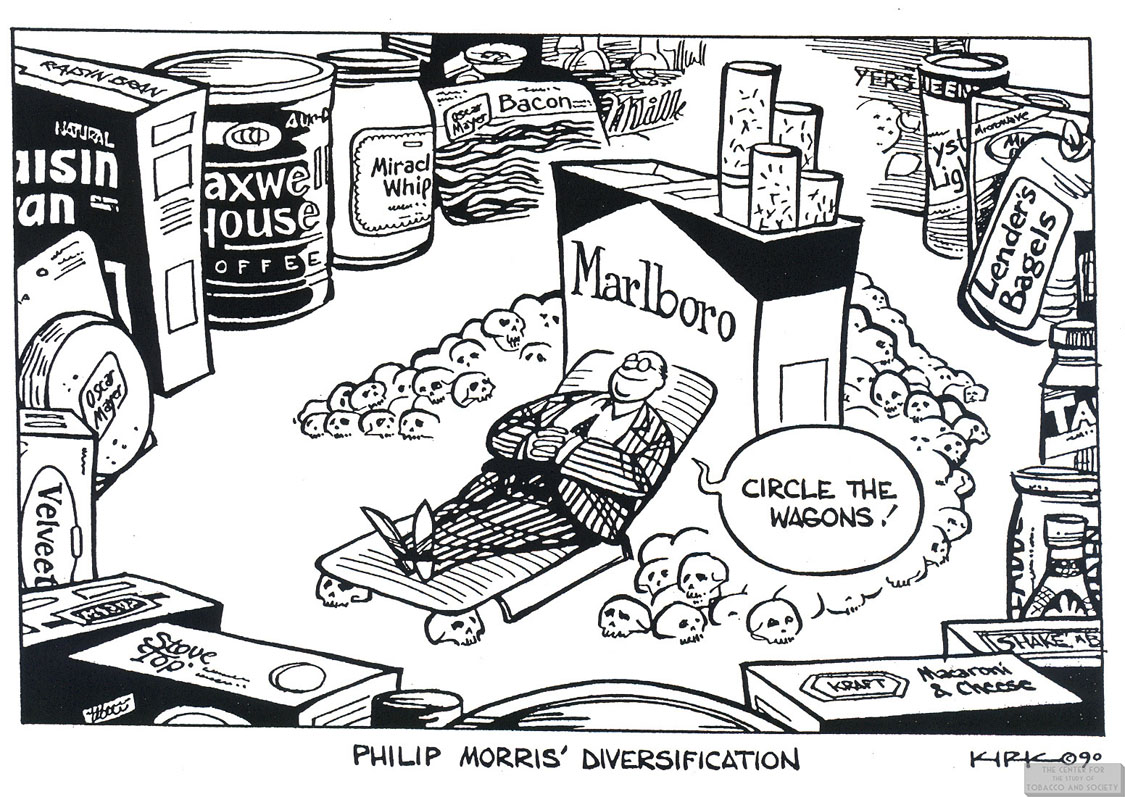 “I’m sure cartoons had an important impact on my adolescent views of smoking. MAD Magazine had plenty of anti-smoking messages; even Wacky Packages told grade schoolers that smoking was for morons. Imagine the social good that could be unleashed if MAD and comic books replaced all school textbooks. A Utopia through cartoons is within our reach!” 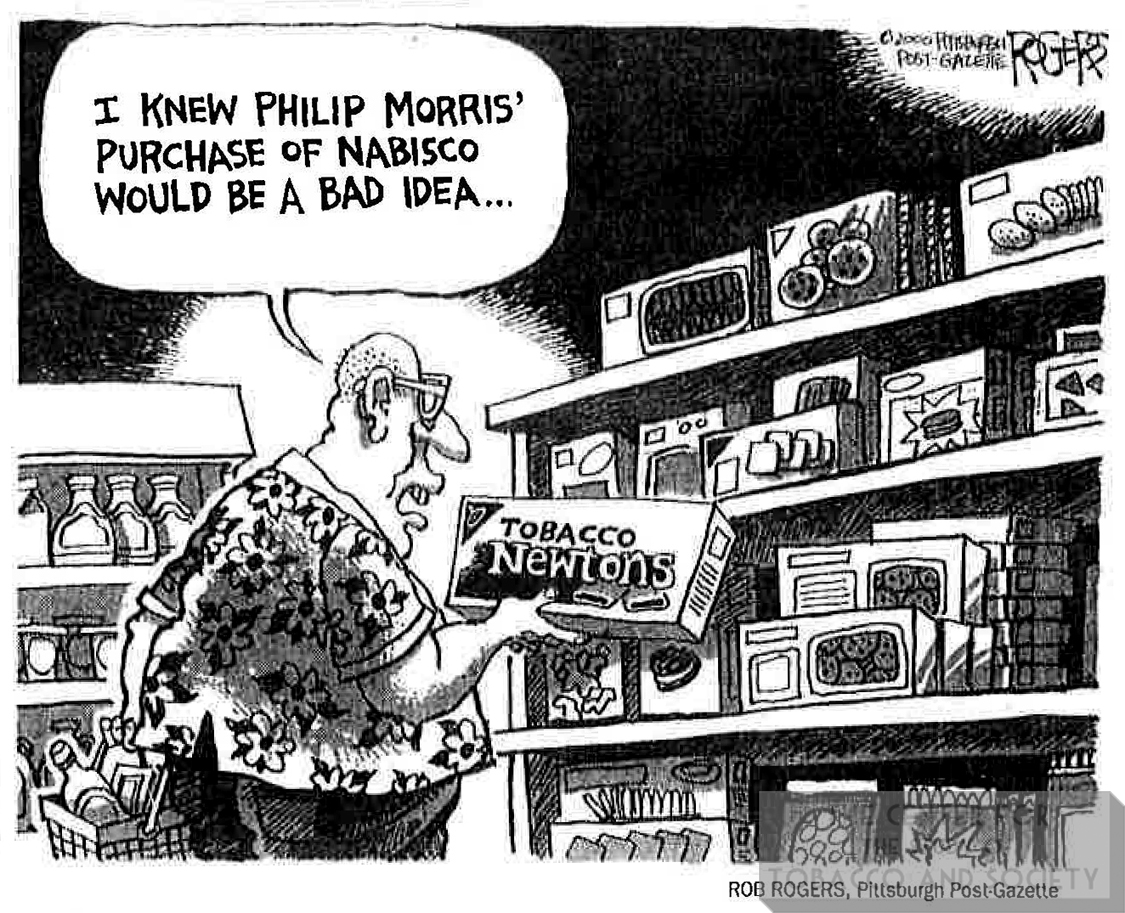 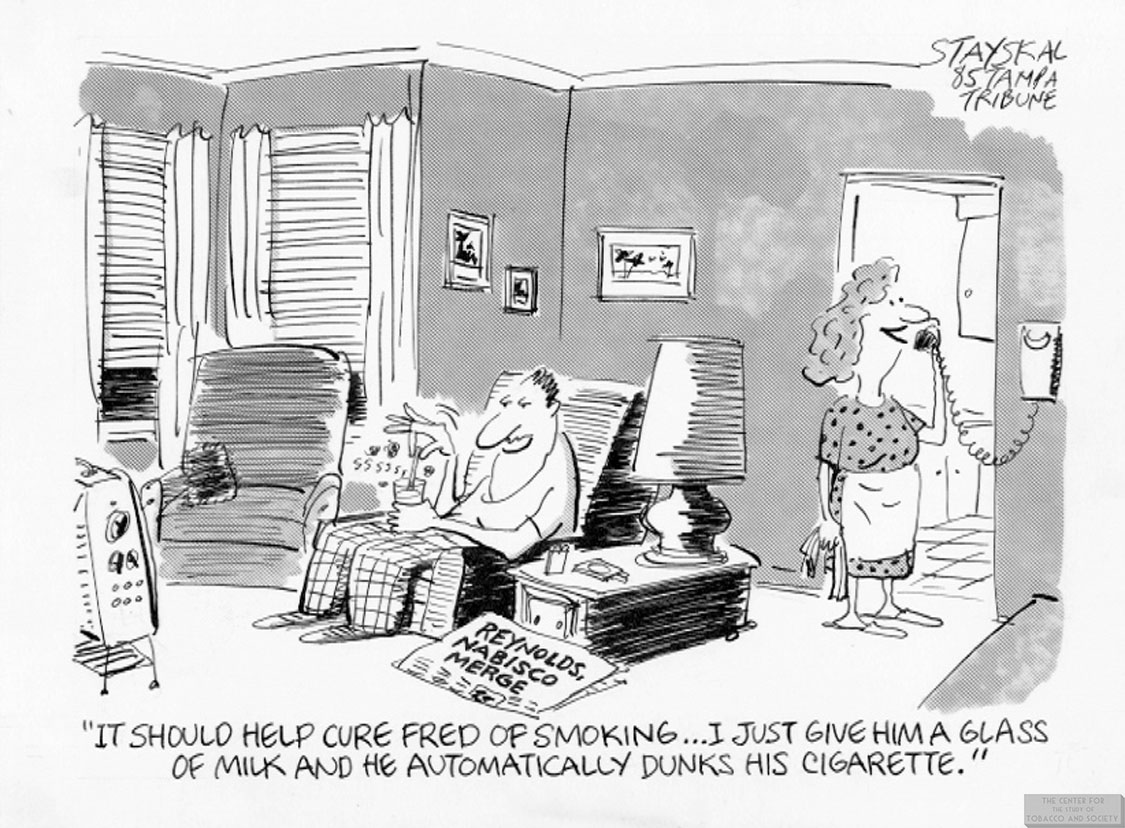