Center for the Study of Tobacco and Society

This exhibition retraces the battles over smoking in the nearly 60 years since the Surgeon General’s report, as seen through the eyes of the nation’s newspaper editorial cartoonists. The exhibition evolved from a research poster at the 10th World Conference on Tobacco or Health in Beijing, August 24-28, 1997 and an invited presentation in Toronto on June 29, 2001, at the combined conventions of the Association of American Editorial Cartoonists (AAEC) and the Association of Canadian Cartoonists. Leaders of the AAEC encouraged the creation an exhibition, which debuted at the association’s 2004 convention in Lexington, Kentucky and traveled to eight other cities over the next four years. The exhibition featured original artworks of more than 80 editorial cartoonists and the headlines that inspired the trenchant cartoons. From 2020 to 2022, the exhibition was digitized, updated, and expanded to include over 100 artists.

Communicating information through the mass media about ways to prevent, diagnose, and treat cancer is essential to improving the nation’s health. Yet throughout the 20th century, tobacco companies were among the top advertisers in the most widely read news magazines. This made for many ironic juxtapositions of front cover stories on cancer and back cover cigarette advertisements. This exhibition presents examples of such two-faced coverage from the Center’s collection.

Although most adults and adolescents know that smoking can cause lung cancer, most are not aware that cigarettes take an even greater toll on the heart. This exhibition looks at what government health agencies, medical schools, medical societies, the mass media, health organizations, drug companies, and pharmacy chains have done—and have not done—to reduce the devastating cardiovascular consequences of cigarette smoking.

This single-item exhibition spotlights the oldest item in the Center’s collection. Read and hear what the first newspaper advice columnist, John Dunton, had to say about the health effects of smoking…in 1691

“Depictions of Smoking In Pharmaceutical Advertising”

Pharmaceutical companies have educated physicians to prescribe medications to treat smoking-related diseases while failing to reinforce the need to talk to patients about stopping smoking–which could reduce the need for medications. This exhibition features examples of prescription drug advertisements in medical journals with stereotypical images of smokers.

This exhibition features stories of tragedy and regret of nine ordinary men and women who were models in cigarette ads….and two celebrities dying from lung cancer who appeared in anti-smoking TV commercials.

Created in 1970 in response to the underpayment of women athletes, the Virginia Slims Tennis Circuit was also an opportunity for cigarette maker Philip Morris to promote a new brand aimed at the liberated woman. This exhibition traces the use of tennis in cigarette marketing and the efforts by Doctors Ought to Care and other activist groups to throw tobacco out of sports.

From the diamond to the gridiron, tobacco companies invested heavily throughout the 20th century to associate cigarettes, cigars, and smokeless tobacco with athletic prowess, as illustrated in these sport-by-sport exhibitions based on items from the Tobacco Industry Sponsorship of Sports Collection of the Center for the Study of Tobacco and Society.

This exhibition is drawn entirely from the Center’s Children and Tobacco Collection, which consists of candy cigarette, cigar, and chewing tobacco products sold in candy stores the world over throughout the 20th century. The exhibition also highlights examples of cigarette marketing aimed at teenagers and children.  For instance, in the 1980s video game arcades featured Pole Position and Super Monaco GP, popular auto racing games with real cigarette brand logos on the racecars. This exhibition fncludes an interview with Dr. Rick Richards, who was instrumental in getting these logos out of video games.

Corporate sponsorship of dance troupes, opera companies, concert tours, film festivals, and art exhibitions at leading museums and libraries was pioneered in the 1950s by Philip Morris, maker of America’s top-selling cigarette, Marlboro, as a way to distract from the growing body of medical evidence of cigarette smoking’s deadly toll. This exhibition reveals the deep-seated addiction of leaders of art museums to money from cigarette makers…to the present day.

This exhibition explores the corrupting influence of cigarette advertising in the pages of the Journal of the American Medical Association from the early-1030s to the mid-1950s, as well as the decades-long complicity of the AMA with the tobacco industry–well into the 1980s–to ignore or deflect concerns over the adverse health consequences of cigarette smoking.

“The Makin’s of a Nation”

From 1914 to 1918, a global conflict involved more than 70 million soldiers and cost over 16 million lives. Tobacco also went to war, packed in every doughboy’s knapsack. Through patriotic advertising and the distribution of free cigarettes to soldiers by the Red Cross and other health organizations, cigarettes replaced cigars and chewing tobacco as young men’s favorite vice. This exhibition chronicles the use and promotion of tobacco products in World War I.

The Targeting of African Americans by the Tobacco Industry

By the 1960s, menthol cigarette brands were especially popular among African Americans, to whom they were heavily marketed. Three brands—Brown & Williamson’s KOOL, Lorillard’s Newport, and R.J. Reynolds’ Salem—made up the lion’s share of the market. Not a single advertisement for a non-menthol brand ever appeared in the leading African-American magazine EBONY, which never published an article on the leading preventable cause of death among African Americans: cigarette smoking.

Other marketing strategies included advertising on billboards, in minority newspapers, and on point-of-purchase signage in convenience stores and gas stations. Cultural events included the KOOL Jazz Festival and gospel and jazz concerts sonsored by Philip Morris’ Benson & Hedges cigarette brand. Philip Morris was a prominent sponsor of meetings of Black newspaper publishers, Black journalists, and the National Association for the Advancement of Colored People. This exhibition exposes the depth and breadth of the targeting of African Ameicans by the tobacco industry.

“Smoking in the Balcony Only”

In the first two decades of the 20th century, cigarette smoking became one of the great unifying elements of society. Movies were becoming the top entertainment medium, and on the screen people from every walk of life were enjoying cigarettes. Tobacco companies soon enlisted the top movie stars of the day to endorse their cigarette brands. This exhibition, an online version of one that was presented at the BAMA Theatre in Tuscaloosa, Alabama, September 10-27, 2006, consists of advertisements from the collection of the Center for the Study of Tobacco and Society and an original film of smoking scenes in movies from the 1930s to the 1960s, “Puff Your Cares Away.”

“Big Tobacco in the Big Apple”

In the latter half of the 20th century, New York City became the global headquarters of the tobacco industry and its allies. Led by Philip Morris, maker of the world’s best-selling cigarette, Marlboro, and by Loews, maker of the leading menthol brand, Newport, cigarette manufacturers wielded enormous influence among opinion leaders and the general public alike until well into the 2000s by means of extensive advertising in The New York Times, The Wall Street Journal, popular magazines, and ethnic newspapers; in theater, opera, and dance programs; on billboards in sports stadiumm; on the largest billboards in Times Square and throughout the city; on the city’s buses, subways, and taxis; and in countless bodegas, newsstands, candy stores, bars, supermarkets, and pharmacies. This exhibition explores the outsized influence of the tobacco industry in New York City and the hard-fought battles of the 1990s and 2000s to pass clean indoor air laws and restrictions on cigarette marketing.

In 2014, The Cancer Network, online home of the journal ONCOLOGY, invited Alan Blum, MD to produce an illustrated history of efforts in the U.S. to counteract tobacco use, cigarette marketing, and the tobacco industry. The resulting timeline, nearly all of the illustrations in which are from the collection of the Center for the Study of Tobacco and Society, was published in four parts over two years.

It may not be who you think…

“The Surgeon General vs. The Marlboro Man: Who Really Won?”

A slide presentation and a video of a gallery tour provide highlights of the only exhibition to commemorate the 50th anniversary of the publication of the landmark Surgeon General’s Report on Smoking and Health on January 11, 1964 by Alabamian Luther Terry, MD.  The exhibition, which included over 130 artifacts and original documents from the collection of the Center for the Study of Tobacco and Society, debuted in October 2013 at the Amelia Gayle Gorgas Library of The University of Alabama before traveling to the Lyndon Baines Johnson Presidential Library in Austin, the Texas Medical Center Library in Houston, and the Louisiana State University Health Sciences Center Library in New Orleans.

“Stamping Out Smoking: Anti-Smoking Postage Stamps from Around the World”

This exhibition features more than 100 anti-smoking postage stamps issued by 65 countries from the collection of Dr. James Lutschg, which he donated to the University of Alabama Center for the Study of Tobacco and Society in 2009. The exhibition was originally displayed in 2010 at the medical libraries of the University of Alabama at Birmingham and the University of Buffalo as part of a national campaign for a U.S. postage stamp to commemorate the 50th anniversary of the publication on January 11, 1964 of the landmark U.S. Surgeon General’s Report on Smoking and Health by Alabamian Dr. Luther Terry.

Medicines in the back, cancer up front. 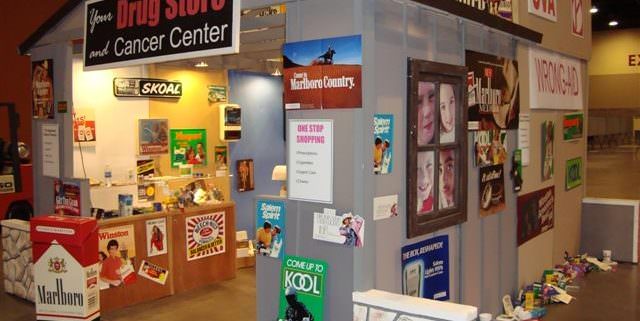 “Your Drug Store and Cancer Center”

After its debut in June, 2009 at the National Conference on Tobacco or Health in Phoenix, Arizona, this walk-through installation of a mock pharmacy was expanded for display at the Buffalo Museum of Science in Buffalo, New York in November, 2009.  The drug store’s contents consist entirely of point-of-purchase cigarette promotions from the 1970s to the 1990s from an actual convenience store, The Nutmeg Shoppe, in Hartford, Connecticut.

An exhibition and symposium about the flight attendants’ fight for smoke free airlines. 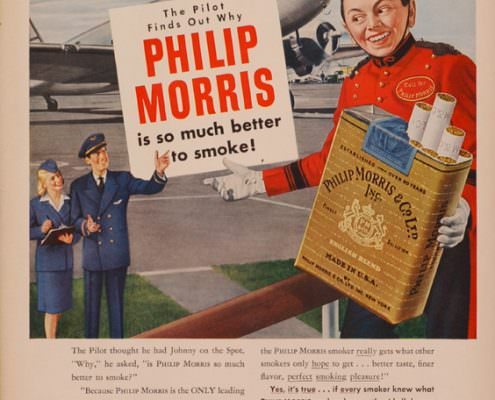 “Up in Smoke: The Airline Flight Attendants’ Fight to End Smoking Aloft”

Do you remember when Santa sold cigarettes? 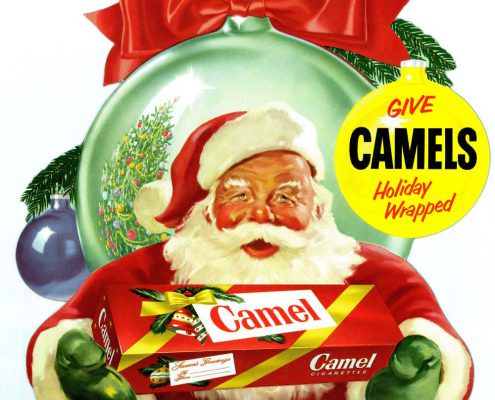 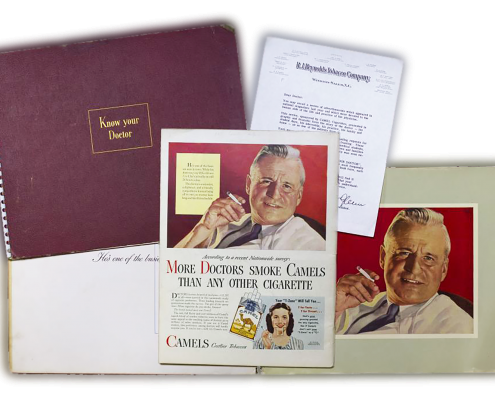