Illustrated by syndicated cartoonists Matt Bors and Ted Rall, written by Alan Blum, MD, and published in a handful of newspapers in 2007, 2013, and 2015, The Marlboro Journal of Medicine comic strip satirized the recruitment of cigarette sales representatives at college career fairs; the tobacco industry’s incessant promotion of “safer” cigarettes; the sale of cigarettes in pharmacies; the regulation of tobacco products by the Food and Drug Administration (the same agency that oversees cancer drugs); and the use of cigarette taxes for everything except fighting smoking. A total of nine versions of the five cartoons were published. 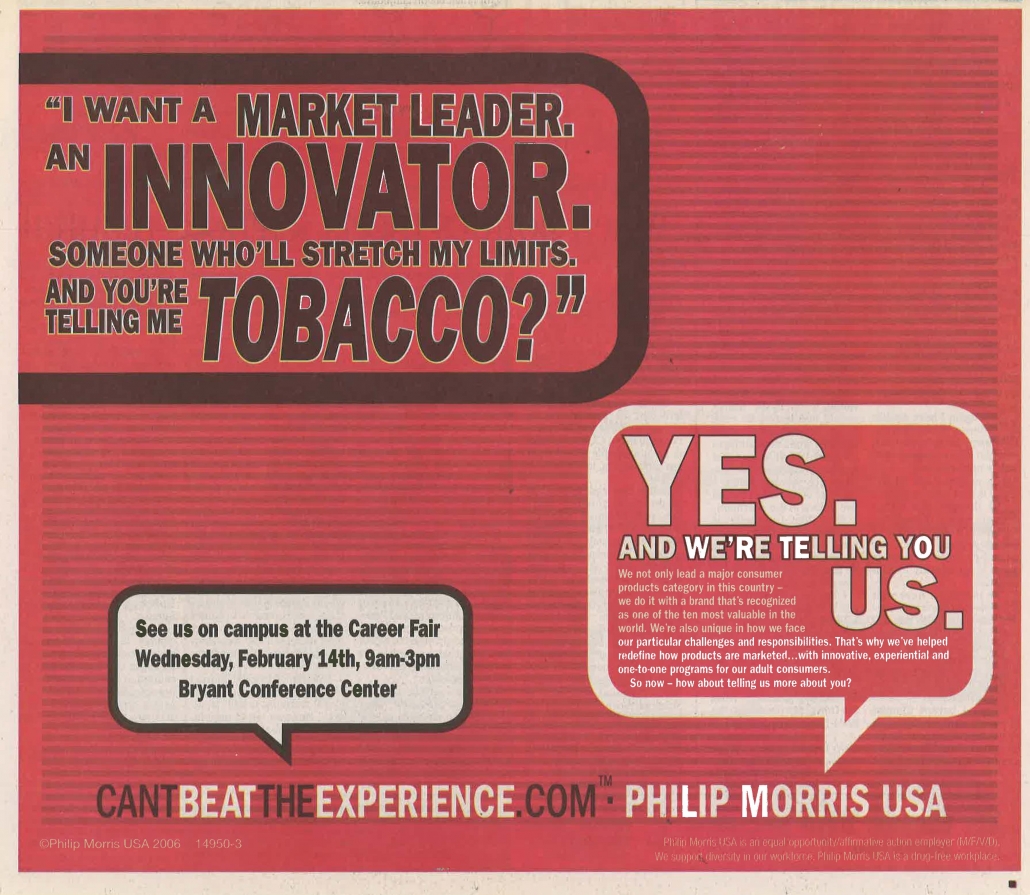 A Market Leader An Innovator 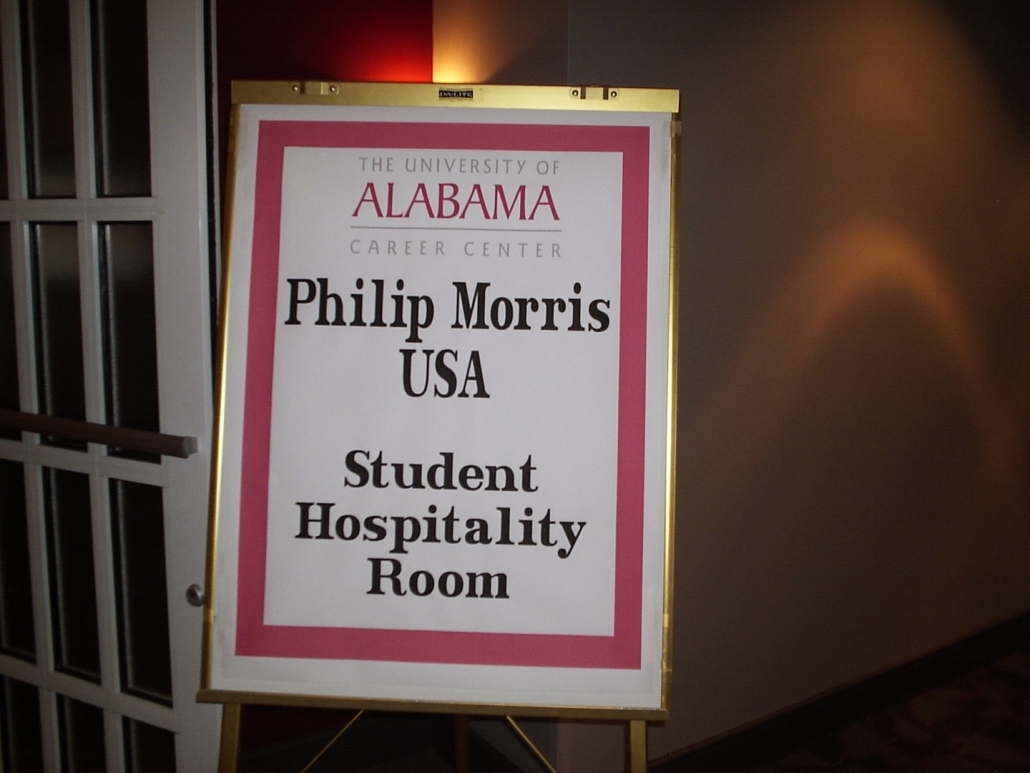 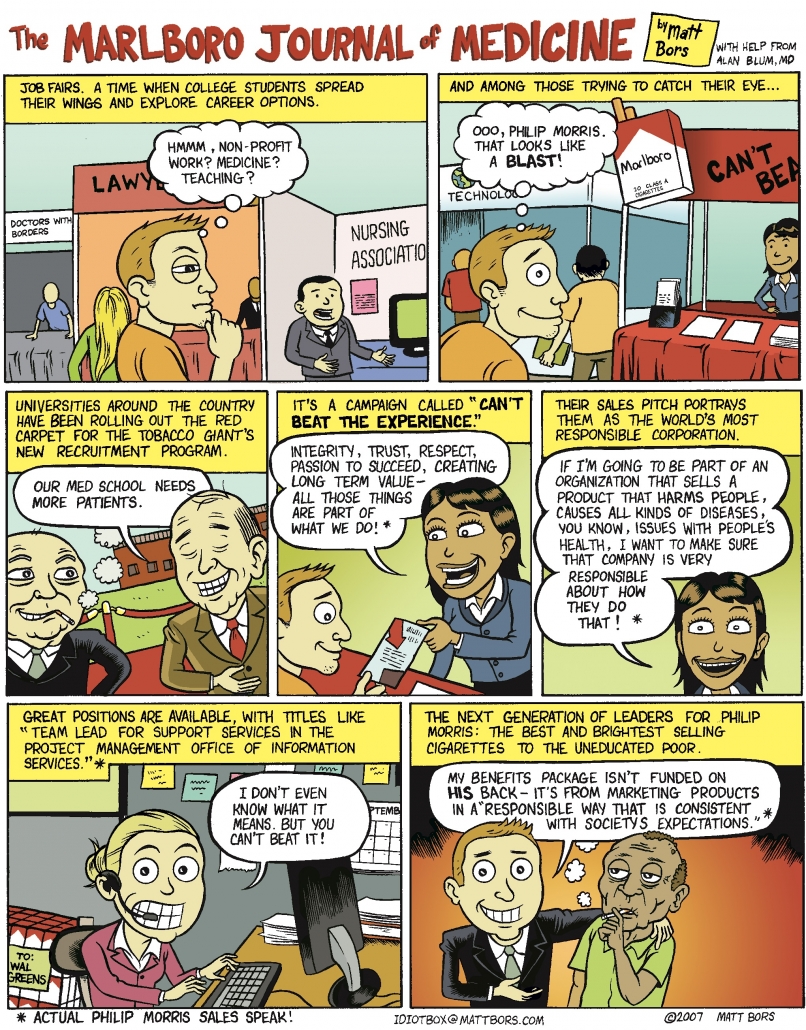 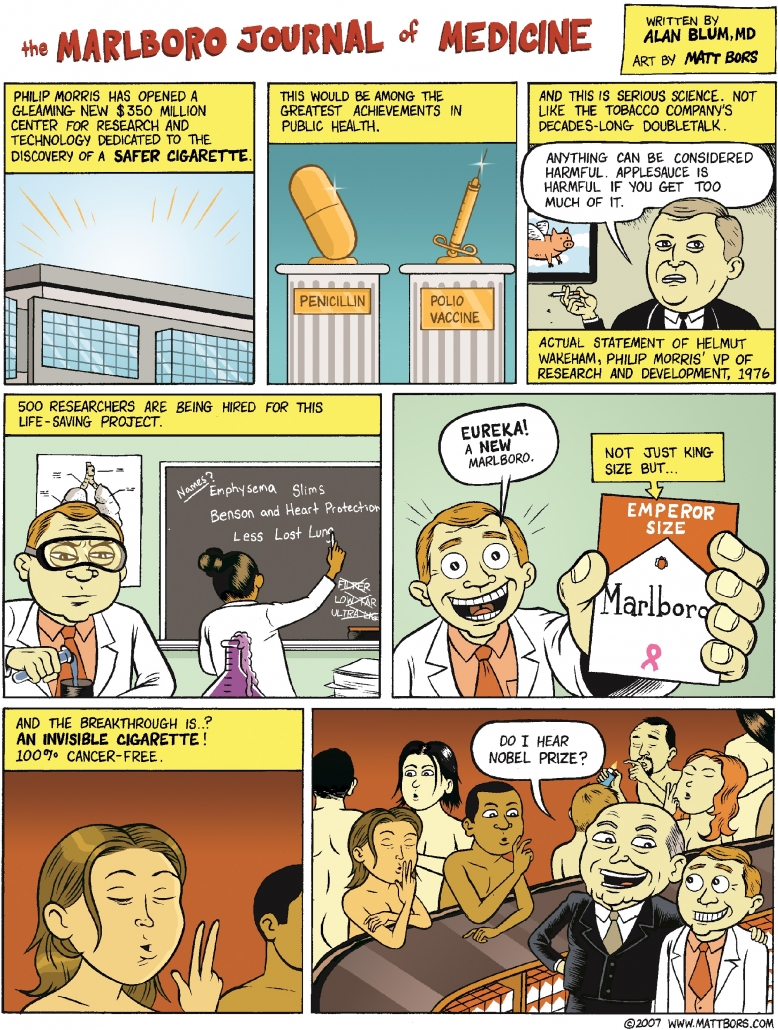 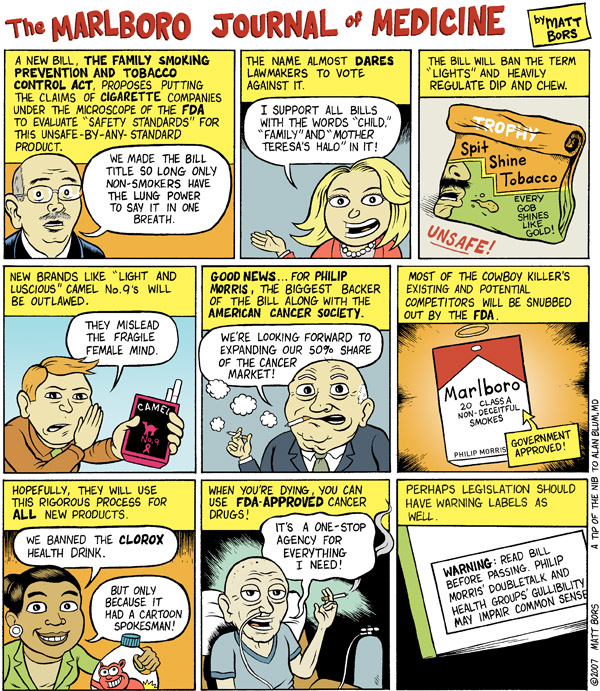 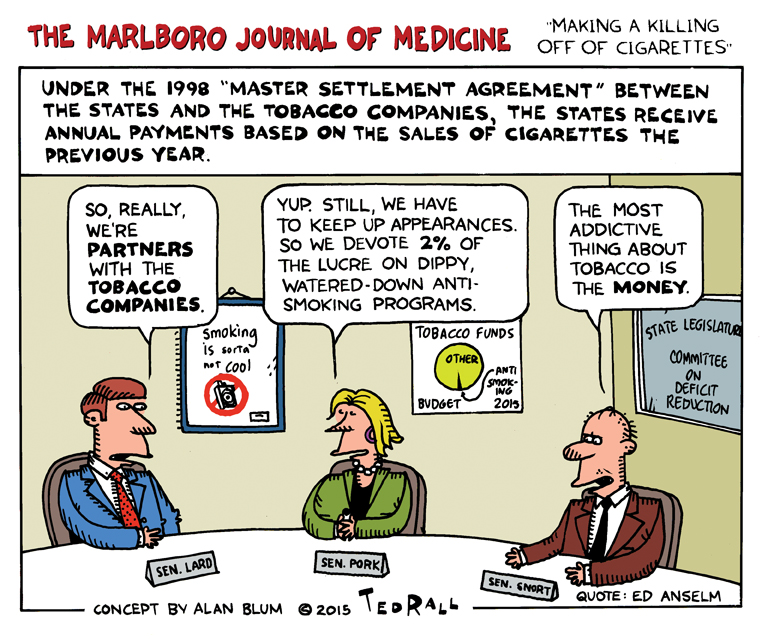 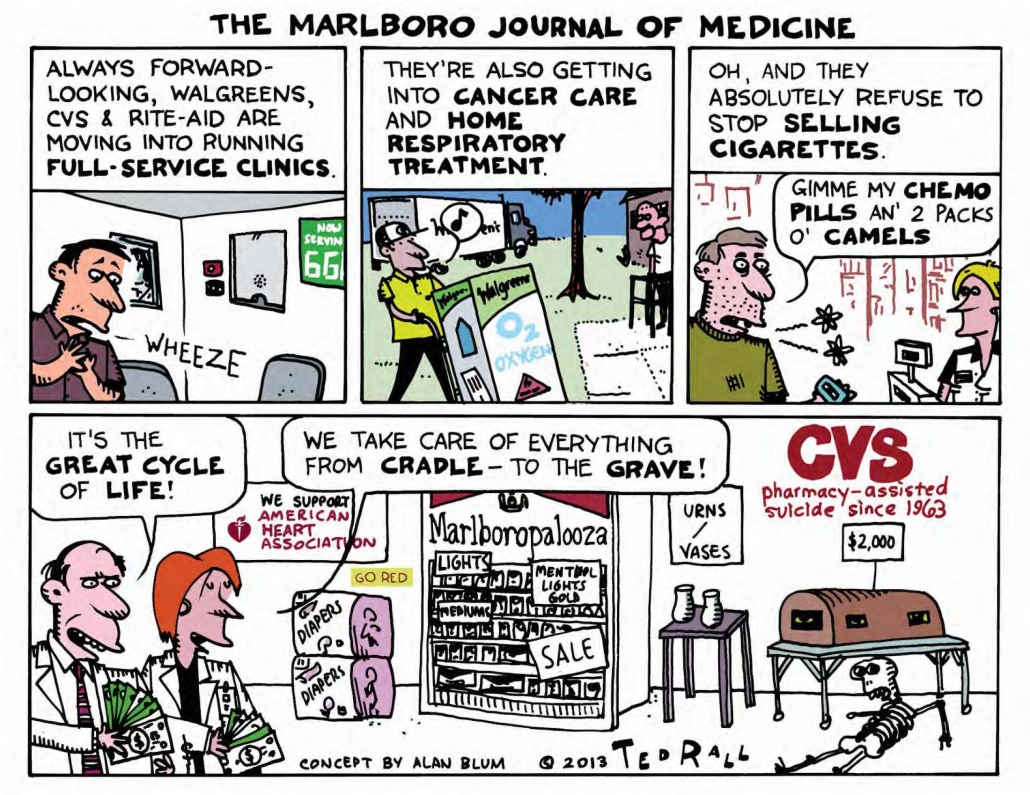 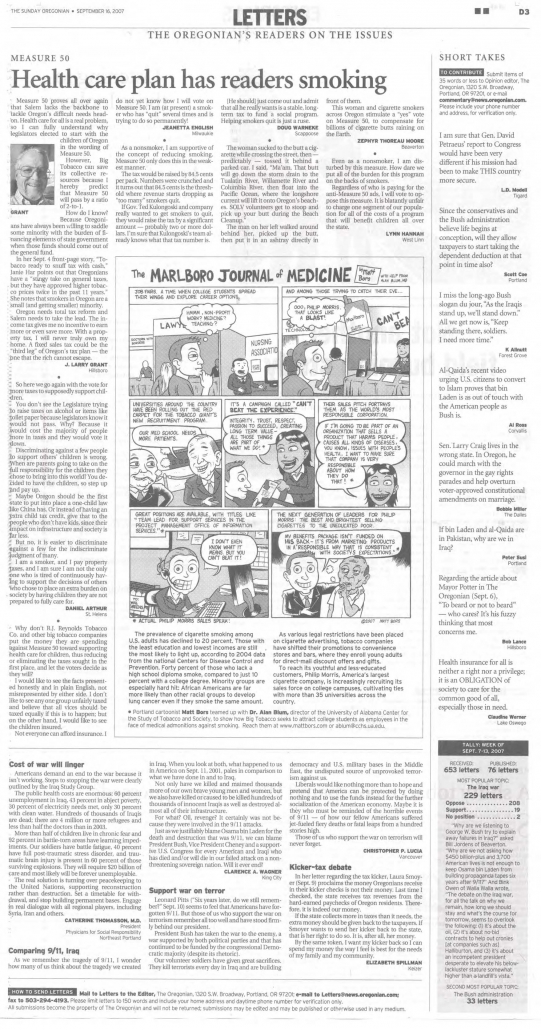 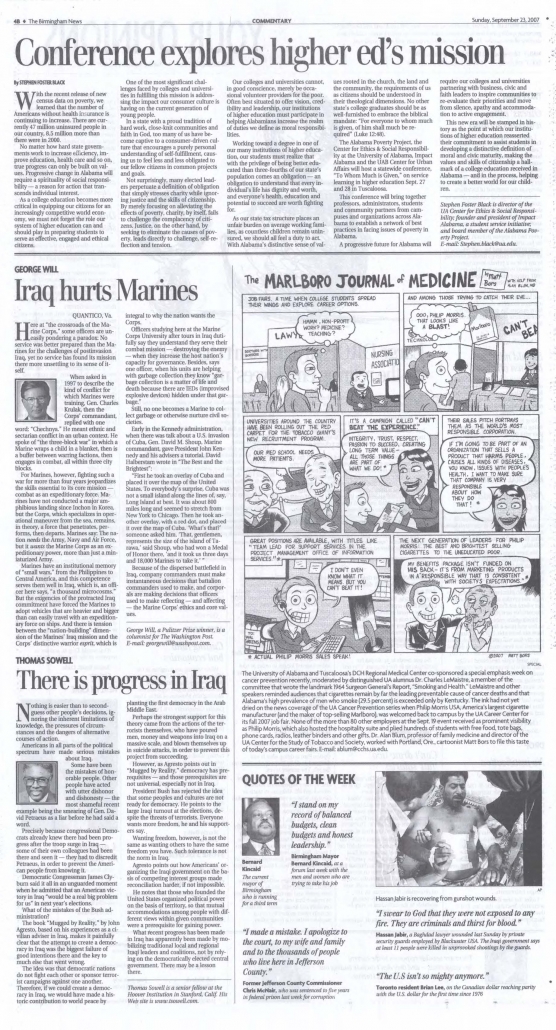 Text accompanying The Marlboro Journal of Medicine cartoon in The Birmingham News, September 23, 2007:

“The University of Alabama and Tuscaloosa’s DCH Regional Medical Center co-sponsored a special emphasis week on cancer prevention recently, moderated by distinguished UA alumnus Dr. Charles LeMaistre, a member of the committee that wrote the landmark 1964 Surgeon General’s Report, ‘Smoking and Health.’ LeMaistre and other speakers reminded audiences that cigarettes remain by far the leading preventable cause of cancer deaths and that Alabama’s high prevalence of men who smoke (29.5 percent) is exceeded only by Kentucky. The ink had not yet dried on the news coverage of the UA Cancer Prevention series when Philip Morris USA. America’s largest cigarette manufacturer (and the maker of top-selling Marlboro), was welcomed back to campus by the UA Career Center for its fall 2007 job fair. None of the more than 80 other employers at the Sept. 19 event received as prominent visibility as Philip Morris, which also hosted the hospitality suite and plied hundreds of students with free food, tote bags, phone cards, radios, leather binders and other gifts. Dr. Alan Blum, professor of family medicine and director of the UA Center for the Study of Tobacco and Society, worked with Portland, Ore., cartoonist Matt Bors to file this taste of today’s campus career fairs.” 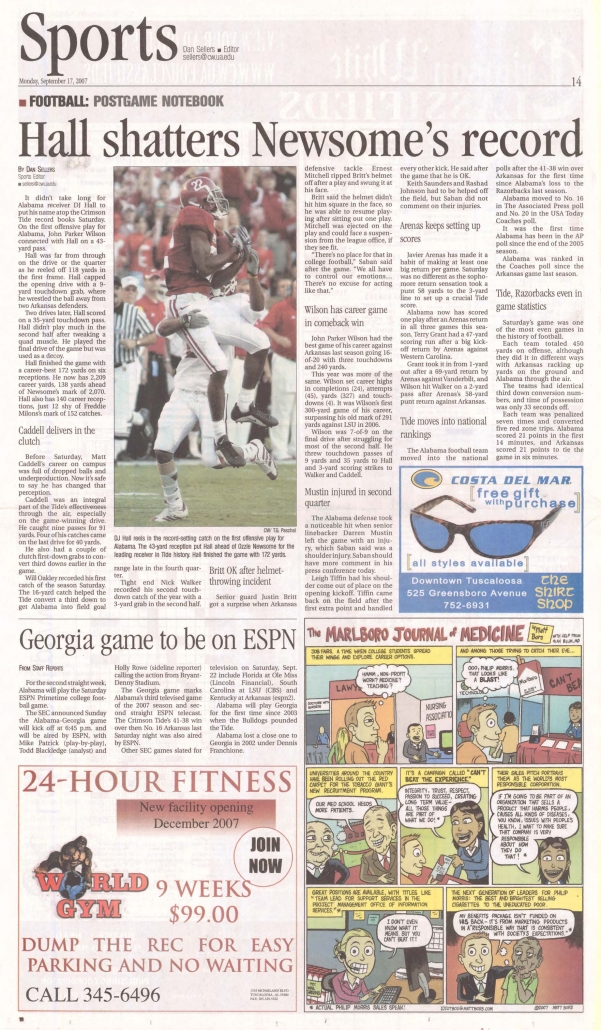 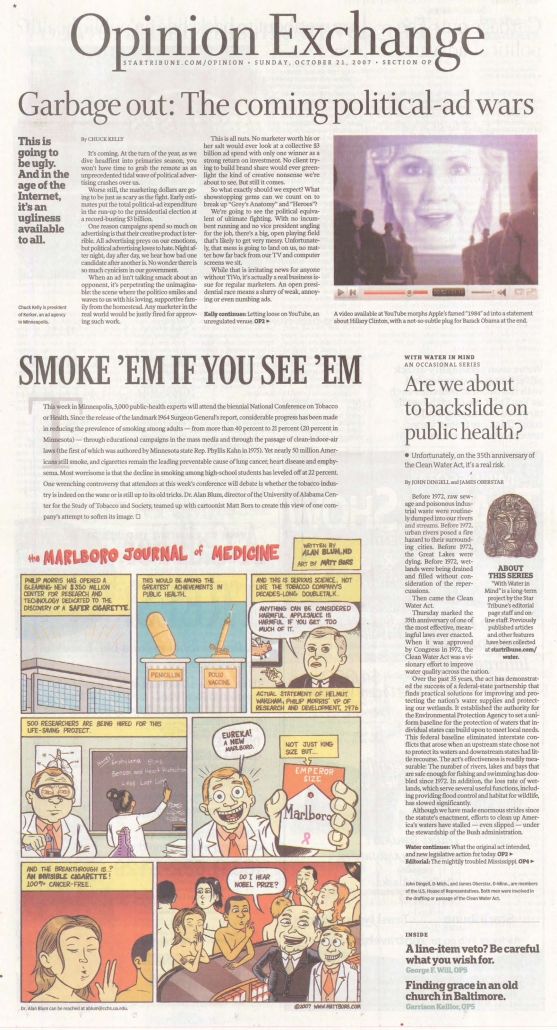 Text accompanying The Marlboro Journal of Medicine cartoon in The Birmingham News, November 4, 2007:

“The Associated Press reported last week that the nation’s largest cigarette maker, Philip Morris, is staking its future on a research center to develop ‘new and reduced-risk tobacco products.’ The company is counting on the public’s short memory to communicate the perception that cigarettes can be made safer. For more than half a century, the tobacco industry has disputed almost every report on the dangers of smoking, has claimed that more research was needed, and has promised to remove any disease-causing component found in cigarette smoke. Yet, more than 4,000 poisons have been identified in cigarette smoke, including more than 40 cancer-causers. If consumers are to be told that one, two, or even 22 of these chemicals have been reduced or removed, then they will assume the problem has been solved and will continue to light up. Dr. Alan Blum, director of the University of Alabama Center for the Study of Tobacco and Society, likens the quest for a safe cigarette to alchemy. But even though he and cartoonist Matt Bors don’t believe Philip Morris is any more likely to create a safe cigarette than to turn lead into gold, they wonder if continuing to fool the public may be worth its weight in gold.” 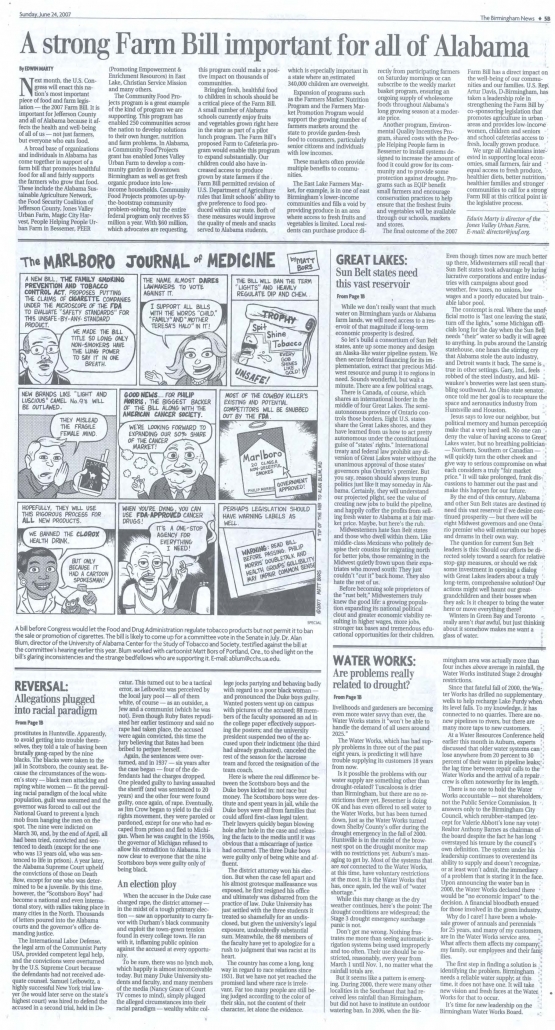 Text accompanying The Marlboro Journal of Medicine cartoon in The Birmingham News, June 24, 2006:

“A bill before Congress would let the Food and Drug Administration regulate tobacco products but not permit it to ban the sale or promotion of cigarettes. The bill is likely to come up for a committee vote in the Senate in July. Dr. Alan Blum, director of the University of Alabama Center for the Study of Tobacco and Society, testified against the bill at the committee’s hearing earlier this year. Blum worked with cartoonist Matt Bors of Portland, Ore., to shed light on the bill’s glaring inconsistencies and the strange bedfellows who are supporting it.”