Alan Blum shares some final thoughts on where the Anti-Smoking has been, where it is going, where it has failed, and where it has succeeded.

In 1978, the American Medical Association (AMA) issued a report, Tobacco and Health, which summarized research projects that confirmed the findings of the 1964 Surgeon General’s report and cemented the association between smoking and heart disease.  This report was entirely underwritten by the tobacco industry, which in effect had succeeded in stifling any action on smoking by the AMA for 14 years.

Twenty years before serving as scientific director of the cigarette manufacturers’ Council for Tobacco Research, Dr. Clarence Cook Little had been the managing director of the American Cancer Society.

Dr. Morris Fishbein, the celebrated editor of the Journal of the American Medical Association (JAMA) from 1914-1950, served as a paid medical consultant to Lorillard Tobacco Company, makers of KENT cigarettes, for several years after leaving JAMA.

KENT cigarettes, which were given to physicians attending the annual meetings of the American Medical Association, the National Medical Association, and other medical conferences in the 1950s and 1960s, featured the Micronite Filter, “so safe, so pure, it’s used to filter the air in many hospitals.”  In the 1980s, it was revealed that the Micronite Filter was made from asbestos.

In 1939, Drs. Alton Ochsner and Michael DeBakey published their observations on the relationship between smoking and lung cancer. For many years, they and the handful of outspoken physician opponents of cigarettes were met with indifference or ridicule within the medical profession, doubtless in part due to the fact that well into the 1950s more than two-thirds of doctors smoked.

In 1964, the Report of the Advisory Committee to the Surgeon General on Smoking and Health reviewed the medical literature and summarized the devastating scientific case against smoking.  The Surgeon General’s report concluded that cigarette smoking was the major cause of lung cancer in men and was causally related to laryngeal and oral cancer.

The Filter as Fraud

No filter, with or without asbestos, confers any health benefit or makes smoking safer.  In fact, the filter requires that the smoker suck harder thus increasing exposure to poison gases like carbon monoxide, cyanide, and ammonia and elevating the risk of emphysema and heart disease. Yet, today, nearly all cigarettes are filtered brands. 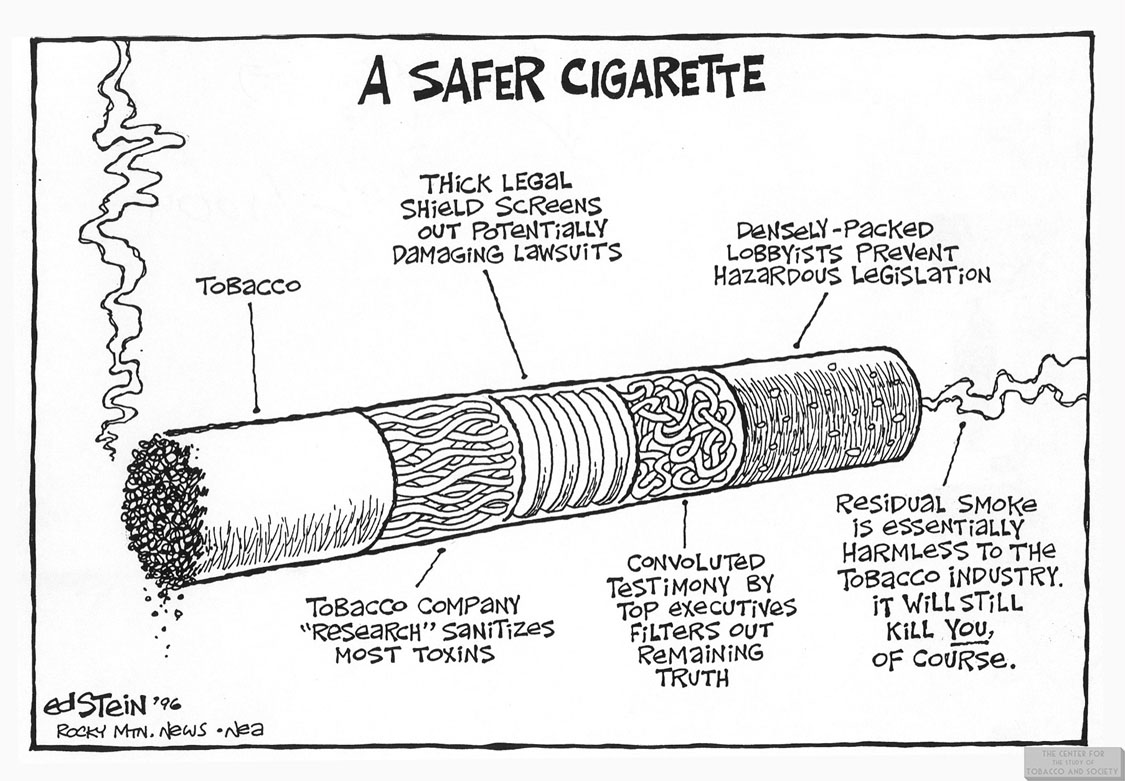 Alan Blum shares some final thoughts on where the Anti-Smoking has been, where it is going, where it has failed, and where it has succeeded.

Addiction to spitting tobacco by young athletes remains a significant problem.  Nonetheless, the United States Smokeless Tobacco Company, makers of SKOAL and Copenhagen, promotes this product as a safer alternative to cigarettes.