“The Targeting of Minority Groups by the Tobacco Industry”

“Targeting of Minorities by Cigarette Advertising”

News article by Cynthia Durcanin
The Atlanta Journal, pages 1A and 14A
March 26, 1989

“Blacks and the Tobacco Industry”

News article by Claudia Morain about the tobacco industry’s numerous ties to African-Americans
The Fort Worth Star-Telegram
April 5, 1994

“Sui-Genocide: The Killing of Minority Groups by the Tobacco Industry” (56:12)

Talk presented by Doctors Ought to Care (DOC) features a discussion by Alan Blum, MD
1989

Anne Browder of the Tobacco Institute 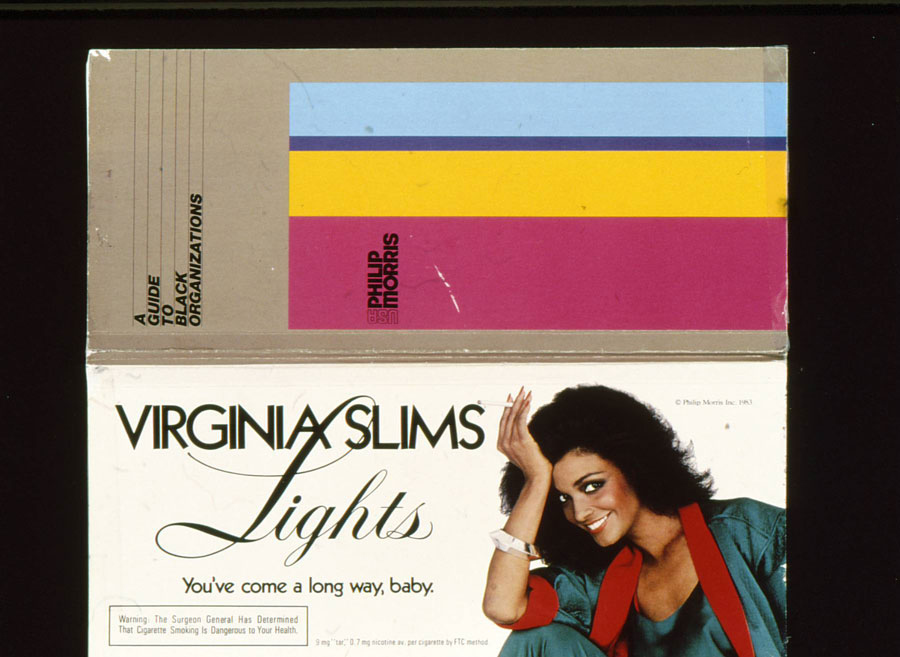 A Guide to Black Organizations 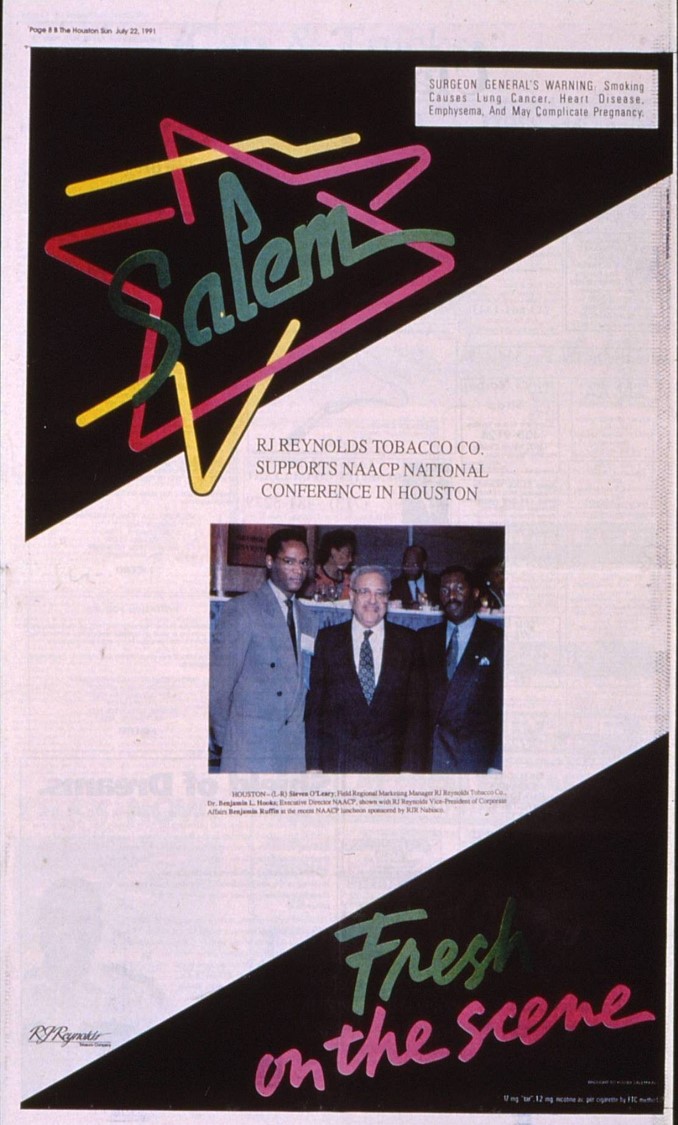 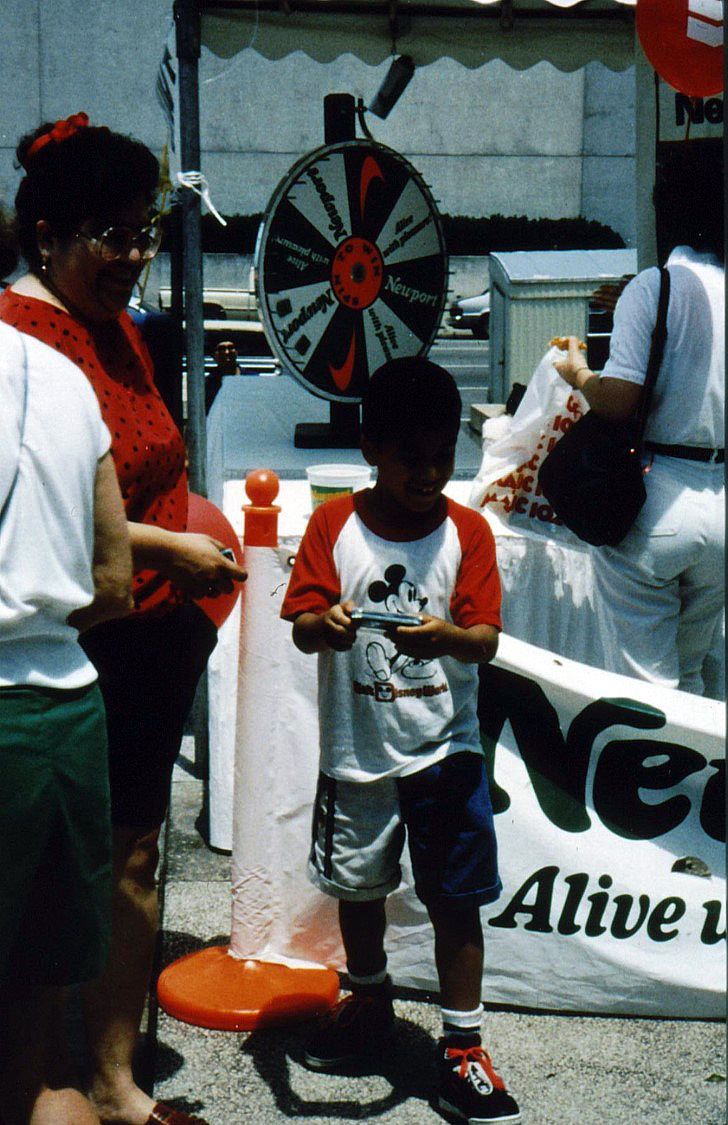 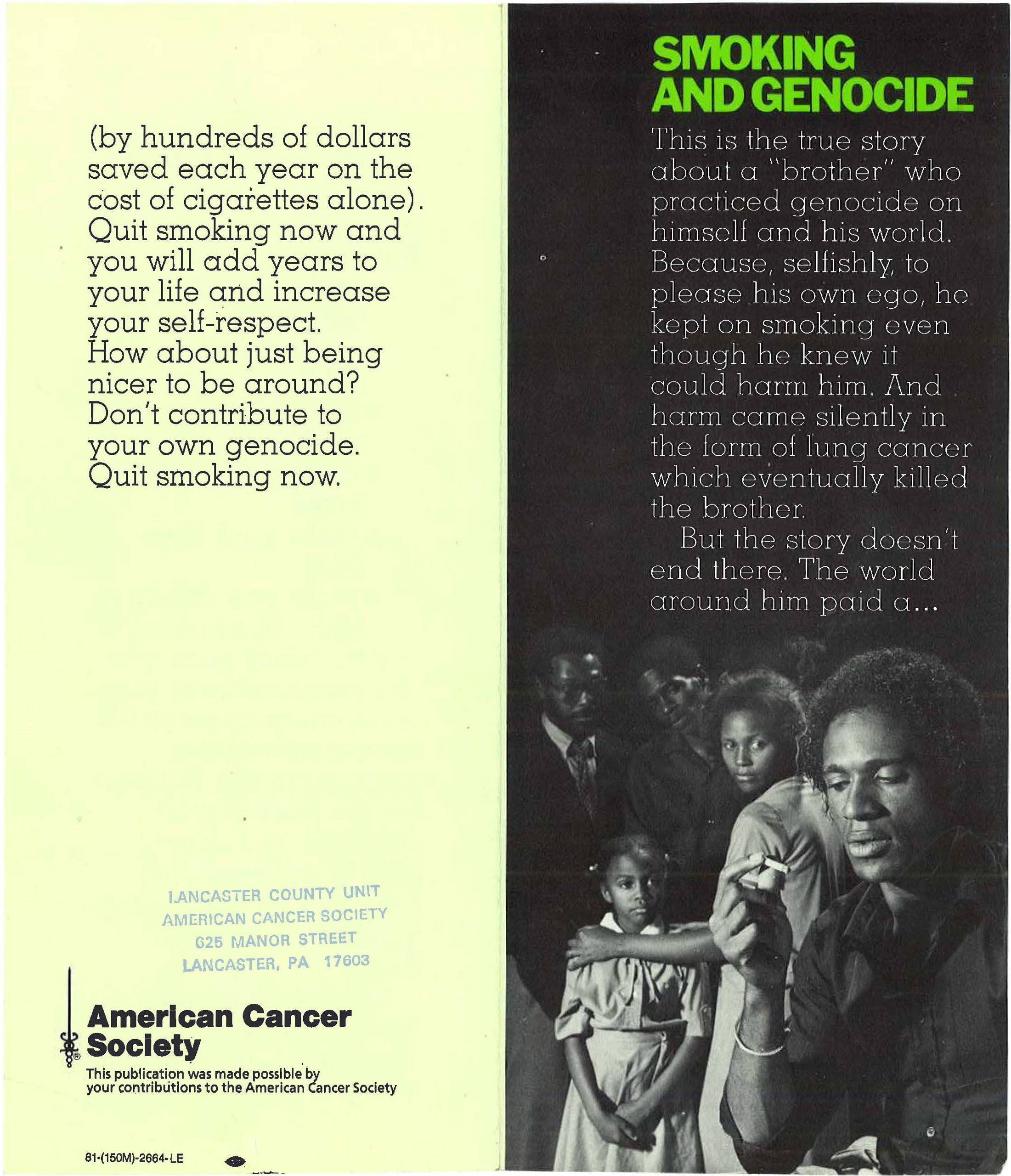 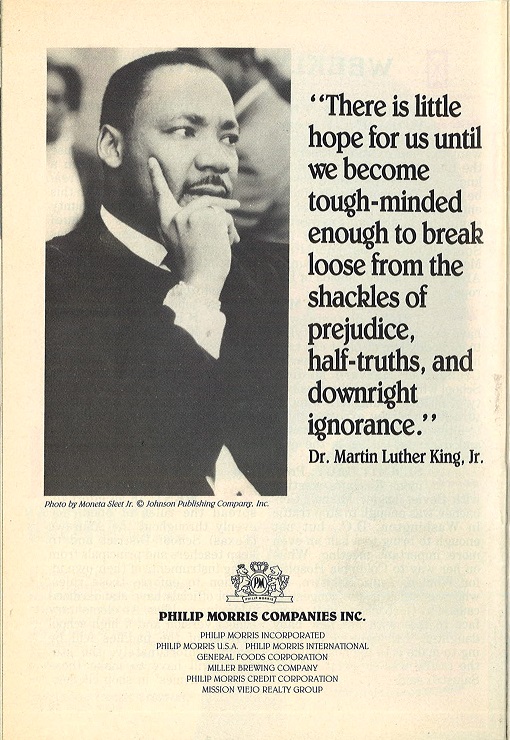 News Reports on Minorities and Tobacco

“One group targeted by cigarette manufacturers is the black community” 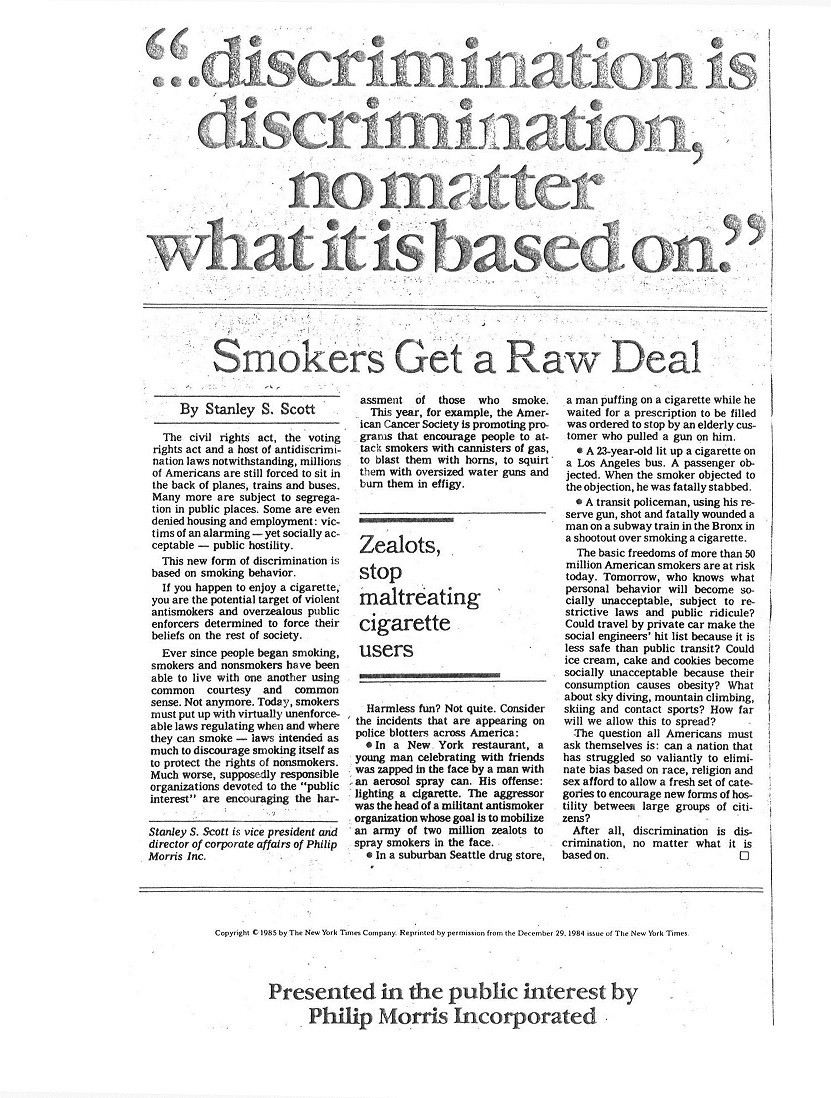 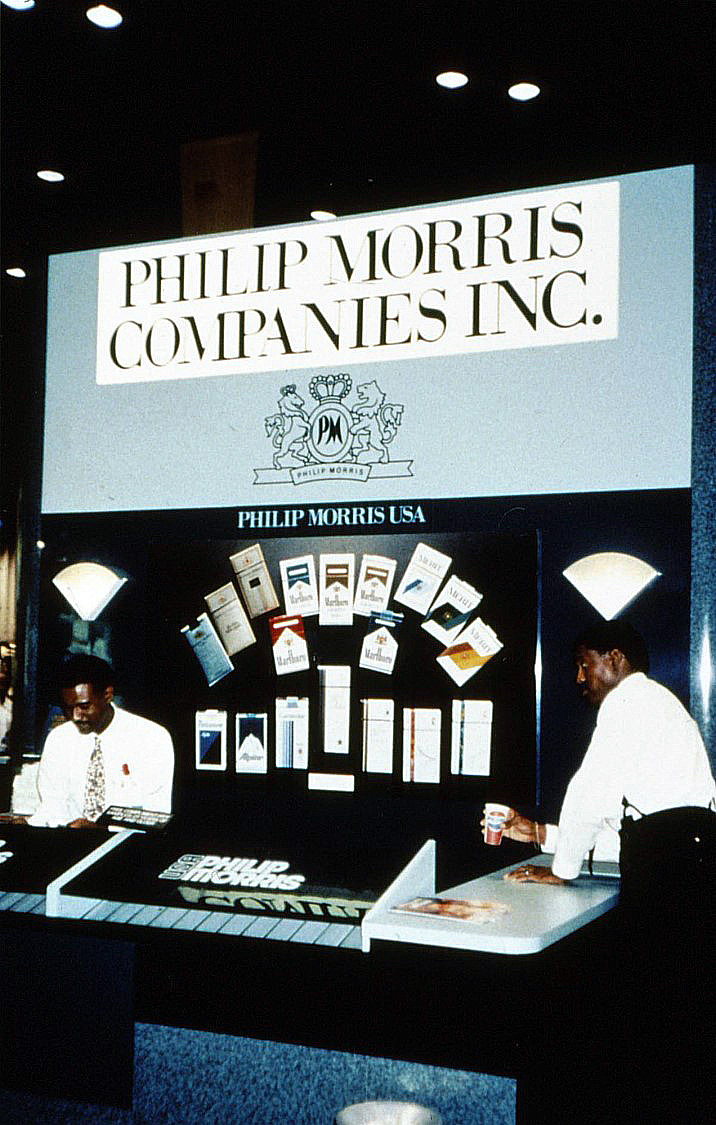 The prevailing opinion of researchers in minority health issues is that African Americans and Latinos live outside the mainstream and rely heavily on television, newspapers, and magazines owned and operated by members of their own ethnic groups for the definition and expression of their worldviews. According to this view, these populations suffer disproportionately from smoking-related death and disease at least in part because of the cultivation of financial ties by the tobacco industry to the very cultural institutions that exert the most influence on the social, political, and intellectual life of minority communities. Researchers further assert that educational approaches focused solely on changing adverse health behaviors are incomplete in the absence of efforts to question the relationship between the tobacco industry and community organizations.

Few if any major visible national, state, or local civic, fraternal, or even health-related minority organizations lack a tobacco industry connection. Through such willful ignorance of the tobacco pandemic, the problem has not come to be regarded as a priority in the black community. In the 1980s and 1990s, questions about the subservience of African-American publishers to the interests of tobacco advertisers were rebuffed as paternalistic. Indeed, minority publishers expressed gratitude for the financial contributions of tobacco advertisers that enabled the preservation of the minority press and other cultural institutions.

In spite of increased attention during the past several decades devoted to the subject of tobacco use and promotion among minority groups, there has been little documentation and scant dispassionate analysis in either the public health literature or the minority press of the ramifications of the widespread financial support by the tobacco industry of influential organizations in minority communities. At the same time, cigarette manufacturers have missed few opportunities to trumpet their contributions to the well-being of emerging population groups, the sick, and the needy. This is evidenced by the following excerpts from RJR Nabisco’s 1987 publication, A Growing Presence in the Mainstream, which was handed out in the company’s exhibit booth at meetings of minority organizations:

“Our primary obligation is..."

“Our primary obligation is to be a good steward of our shareholders’ investments, by wisely employing human and material resources. But we also feel a strong responsibility to serve society, by being a conscientious corporate citizen. Being a good corporate citizen means contributing to the betterment of life in the communities where we do business – helping to move society forward. One aspect of corporate responsibility which we take very seriously is helping minorities and women. We intend to do everything possible to help minorities and women move fully into the mainstream of American businesses. Expanding economic development among minorities and women is one fundamental way that their lives can be improved… [but] our interest in minorities and women is not limited to the economic sphere. We will also continue to offer assistance to the important segments of our population to help in achieving educational, political, and cultural aspirations. Therefore, we will not relax our efforts to provide strong financial support to scholastic, civic and artistic programs for minorities and women.”

Such industry publications provided the impression of generosity and compassion, while admittedly maintaining the foremost objective of protecting shareholders’ interests.

George Knox of Philip Morris – “Our friend, our brother, our comrade”

Audio clip of the Reverend Benjamin Hooks praising Philip Morris for sponsoring the Spingarn Medal Awards Dinner at the 1990 Annual Convention of the NAACP.

More On: The Tobacco Industry Supports and Suppresses Minority Communities