What the first newspaper advice columnist, John Dunton, had to say about the health effects of smoking…in 1691

Whether the Smoking of Tobacco Does A Man Good or Hurt  The Athenian Mercury July 11, 1691
(Complete Text)

The July 11, 1691 issue of The Athenian Mercury is the oldest original publication in the Center’s collection. Printed in London, England twice a week from March 1690 to June 1697 by the Athenian Society, a group of four knowledgeable individuals, the magazine provided answers to readers’ questions on a wide range of subjects, including science, literature, politics, and religion.

In this edition, a reader submits the question, “Whether the taking of Tobacco does a man good or hurt?”

The essay was read for the Center for the Study of Tobacco and Society by Andrew Rakich, an educational YouTuber who reviews historical media and gives lectures about historical events. He also creates fictional characters to depict the viewpoints and behaviors of people in different times. The reading is in the original pronunciation of the vernacular of southern England in the 17th century.

(0:20) Francis Osborne wrote Advice to a Son. Or Directions For your better Conduct, Through the various and most important Encounters of this Life in 1655. Osborne’s most famous work features worldly and jaded counsels and was a departure from the spiritualist texts of its time. It drew accusations of atheism leading it to be banned and burned, which also increased its notoriety and resulted in an even wider readership.

(2:06) Johann Heinrich Meibom’s De Cervisiis & Ebriaminibus aliis (or On Beer and Other Drinks). Meibom wrote 57 medical treatises and is known for his discovery of the sebaceous glands in the eyelid, which are named after him (Meibomian glands).

(2:15) The reference to Virgil and Cacus comes from The Aeneid, in which Vulcan’s son Cacus steals the cattle Hercules is driving in one of his labors. Cacus breathes fire and smoke, and the cave in which he and the cows hide before being routed by Hercules is filled with billowing smoke.

(2:20) “Which if you are dispofed to be Merry, take thus, or fomewhat like ’em) in pure Sternhold.”
A reference to Thomas Sternhold, the principal author of the first English metrical version of the Psalms, translated from Latin. In the text of this article, the original passage for Virgil’s Aeneid describing Cacus is presented in Latin then translated to English for readers who could not read the original.

This article from the Journal of the American Medical Association‘s 1973 Annual Book Number provides a fuller background of The Athenian Mercury (click on the image to read in full): 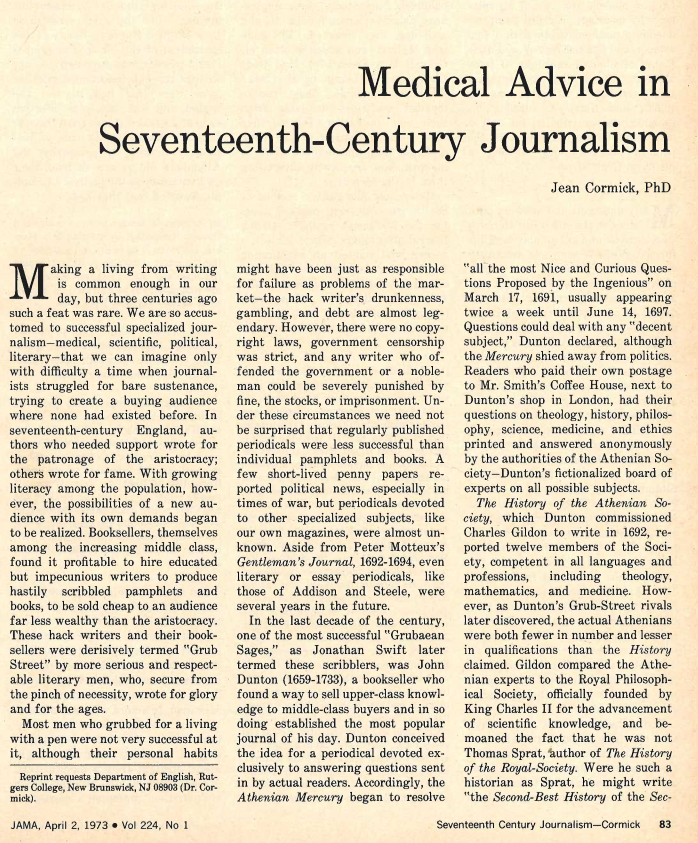