Your Drug Store and Cancer Center

It is stunning and sobering to consider that more pharmacies sell cigarettes today than 35 and 25 years ago. Independent pharmacies, most of which had stopped selling tobacco products by the 1990s out of concern for their customers’ health, have largely been bought out by the chain drugstores, notably CVS and Walgreens. Although CVS stopped selling cigarettes in 2014, Walgreens has remained unmoved by pleas to end its tobacco product sales even as it describes itself as a partner in health care. More pharmacies are being installed in grocery stores by supermarket chains such as Kroger, Publix, Safeway, and Walmart, and supermarket pharmacies now account for more than 12% of retail pharmacy prescriptions. On a more encouraging note, Wegmans stopped selling tobacco products in 2008 in the interest of public health, and Hannaford’s followed suit in 2015. Target’s decision to end cigarette sales in 1996 was brought about by the increasing cost of compliance with laws curbing sales to minors.

Organized efforts to end tobacco sales in pharmacies have been few and far between. California pharmacist Fred Mayer (1933-2019) began crusading for tobaccofree pharmacies in the 1970s. DOC (Doctors Ought to Care) joined the effort in the 1980s, and beginning in 1996 the California Medical Association’s Pharmacy Partnership Project campaigned to get independent pharmacies to drop tobacco products. After more than 70% of independent pharmacies had stopped selling cigarettes, the project changed its name to Prescription for Change to focus on pharmacy chains. One ad aimed at getting physicians and patients to patronize pharmacies that do not sell tobacco products highlighted the hypocrisy of those that do: “They sell your patients the cure for a persistent cough on Aisle 8…and the cause on Aisle 14.” Prescription for Change was funded by the California Tobacco Control Program, which was established in 1988 following a state referendum to dedicate an additional 25 cents per pack excise tax on cigarettes to prevent and reduce tobacco use. From 2010 to 2015, TobaccofreeRx, an interdisciplinary group of pharmacists, pharmacy school faculty and students, nurses, and physicians, worked to end the sale of tobacco products in pharmacies.

Your Drug Store and Cancer Center 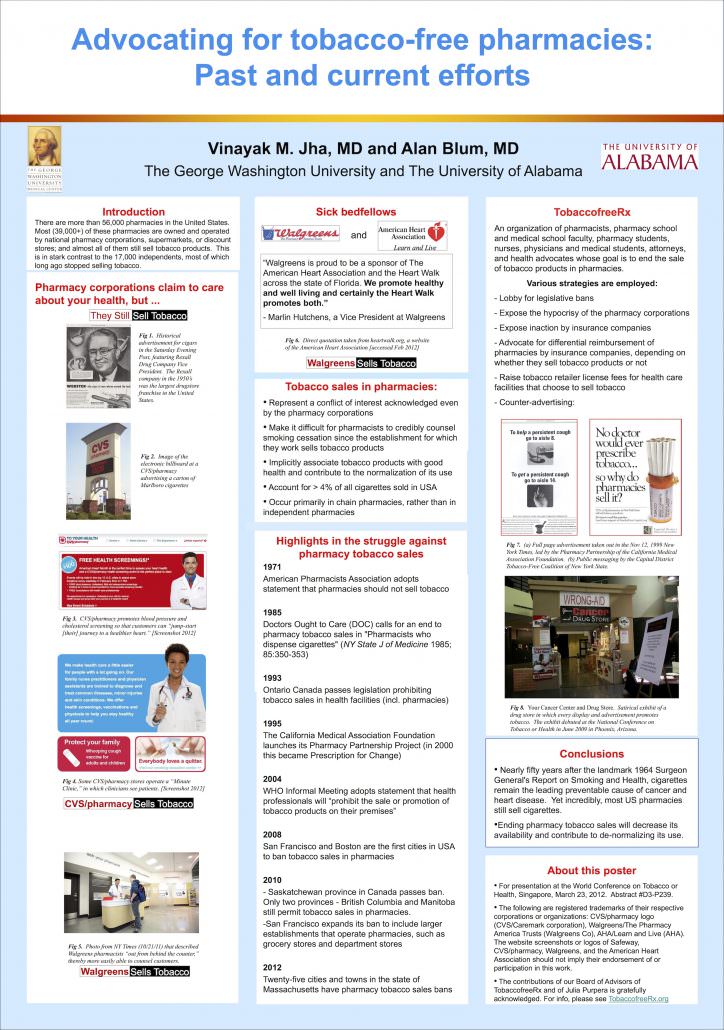 The Sale of Cigarettes and Other Tobacco Products in Pharmacies

Edited by Alan Blum, MD, Director, University of Alabama Center for the Study of Tobacco and Society 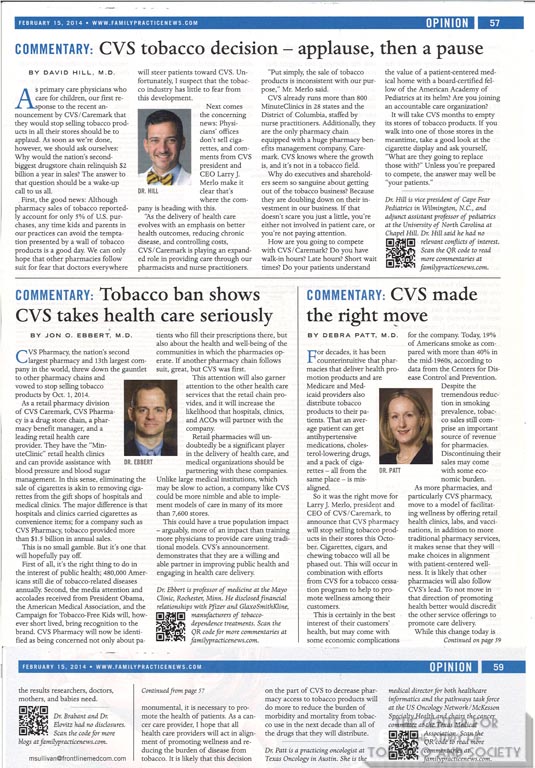 Commentaries on CVS and Tobacco 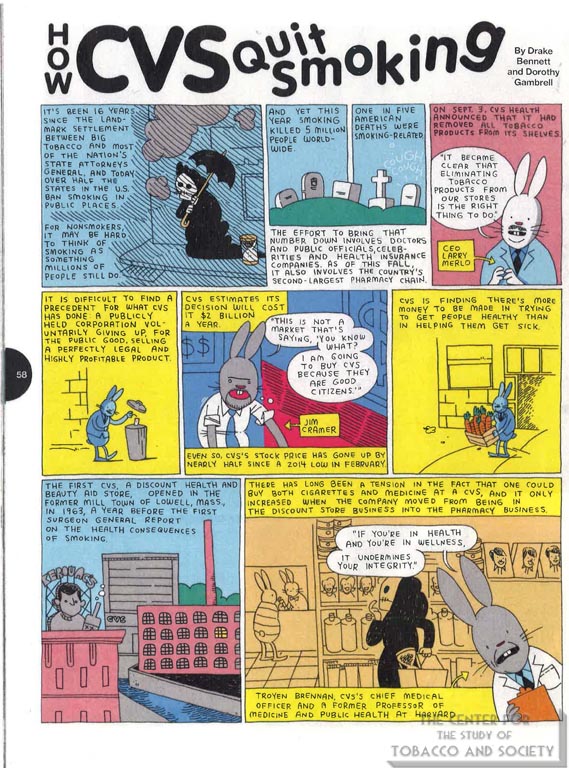 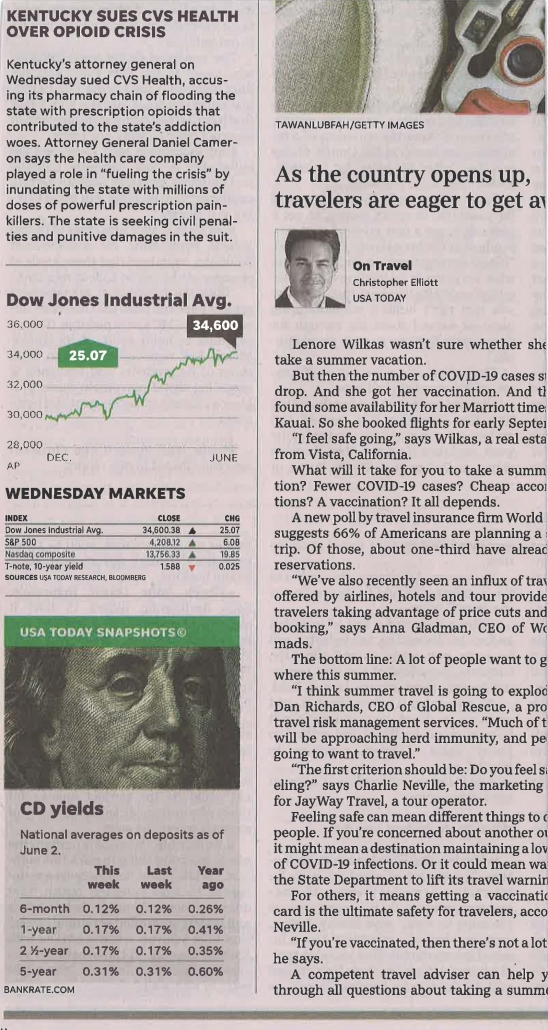 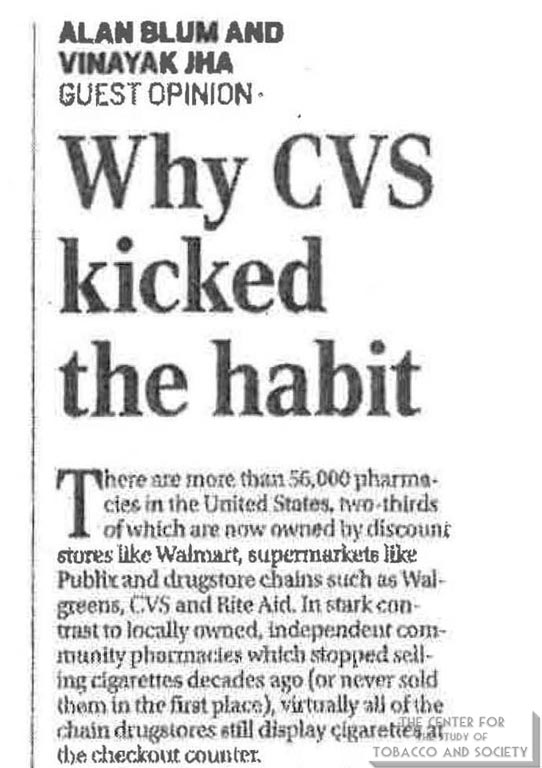 Why CVS Kicked the Habit 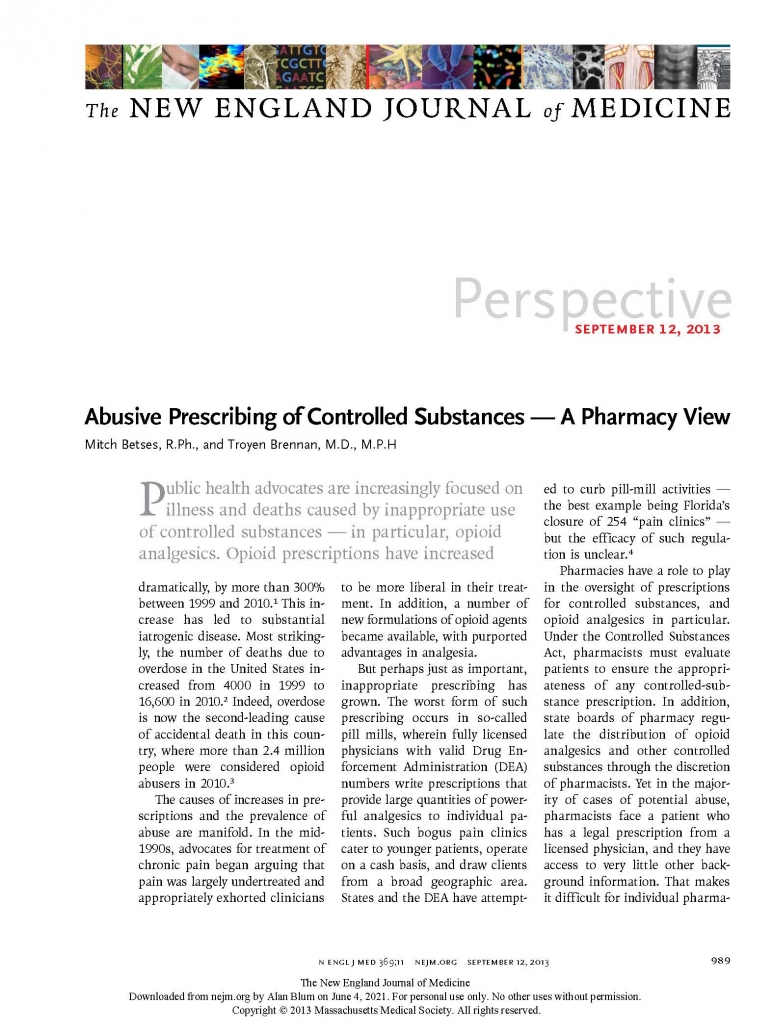 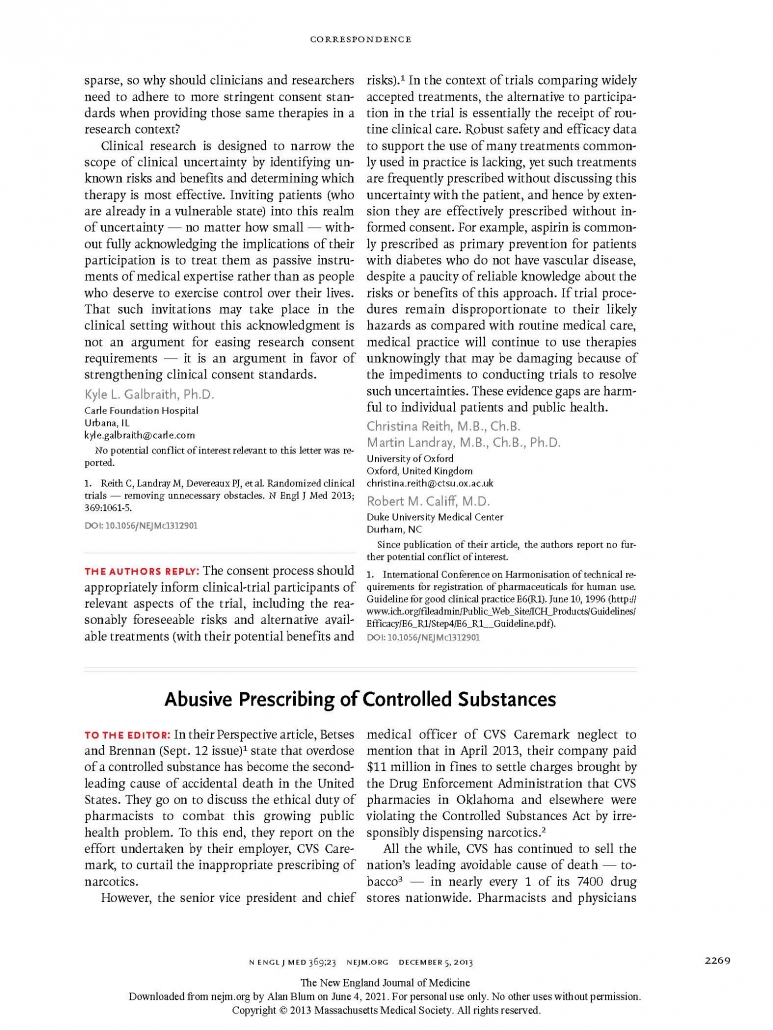 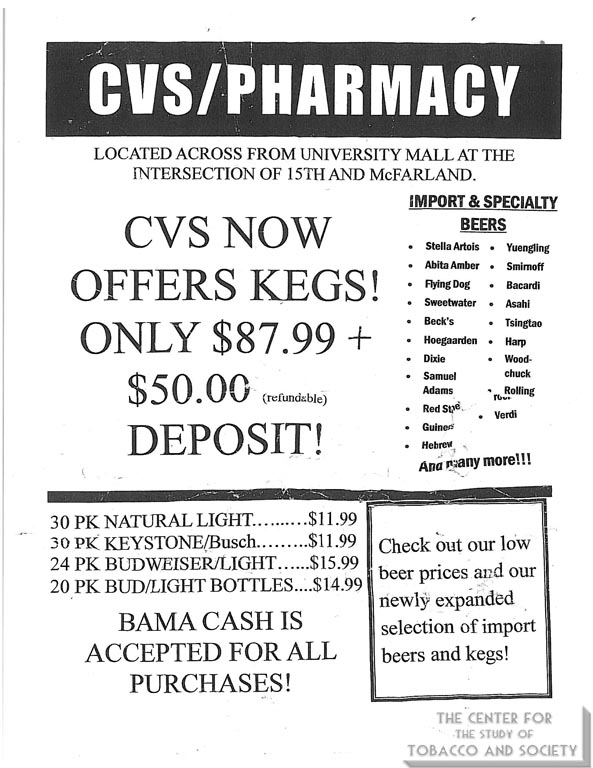 CVS Pharmacy in Your Community 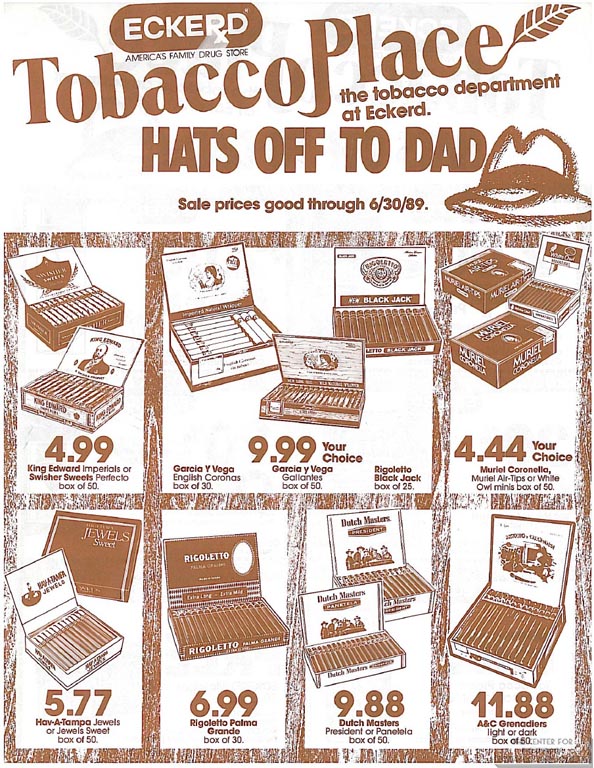 Hats Off To Dad 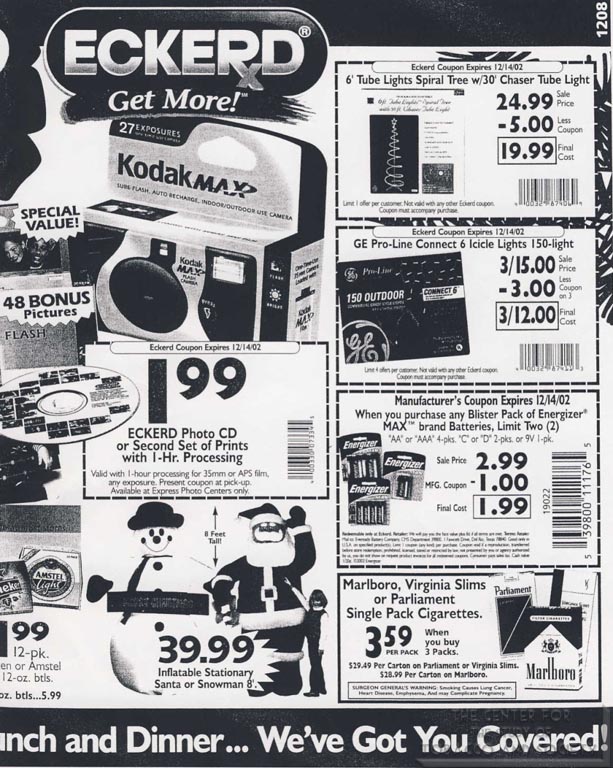 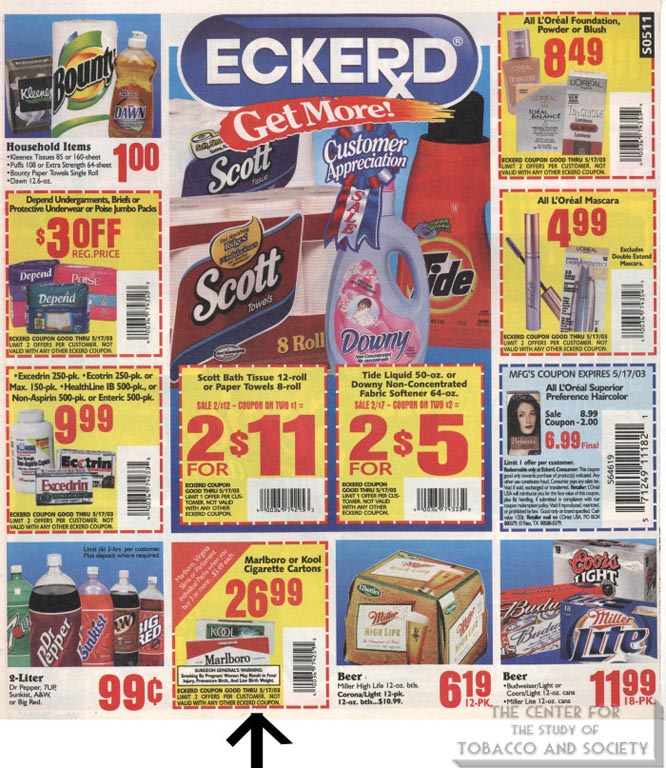 Eckerd Get More – Coupons for Marlboro and Kool Cigarettes 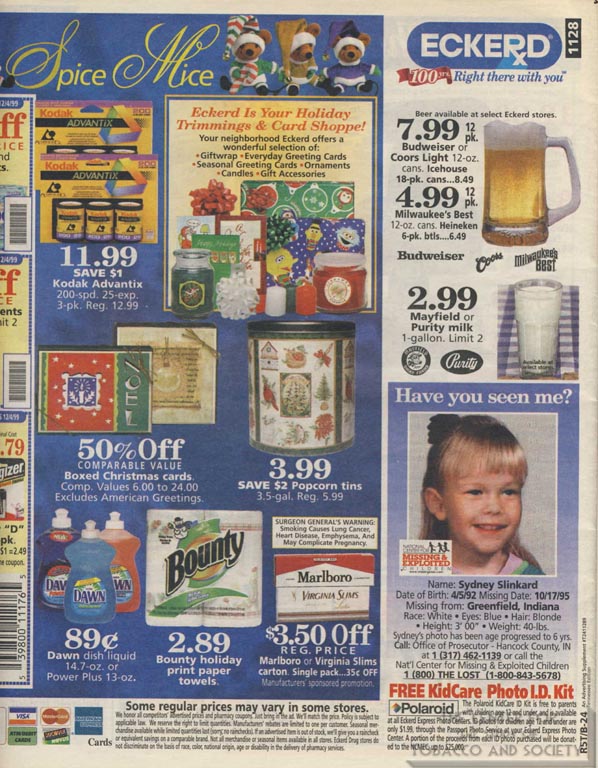 Eckerd Right there with you – Marlboro Virginia Slims Offer 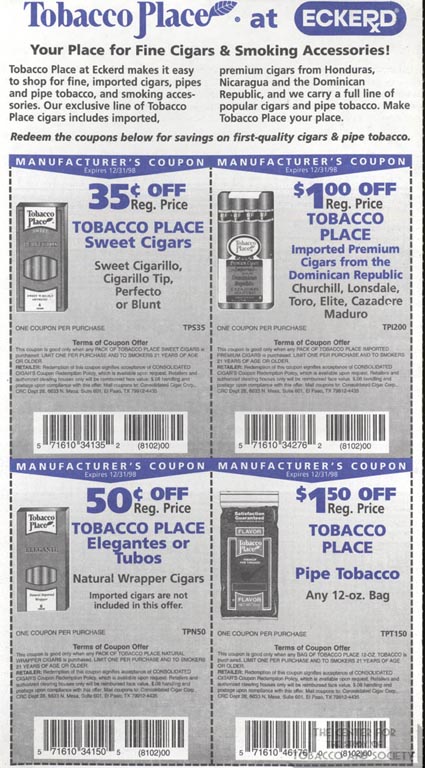 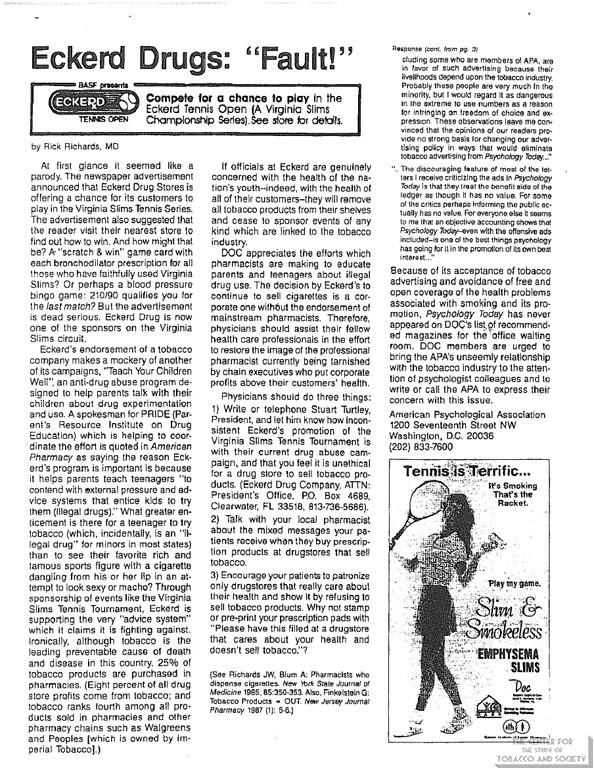 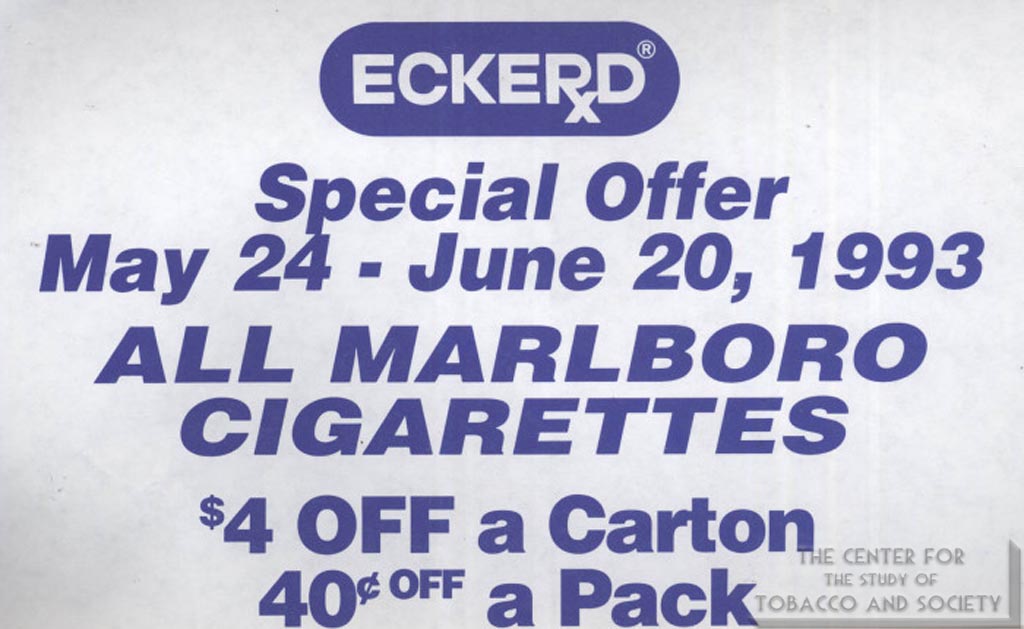 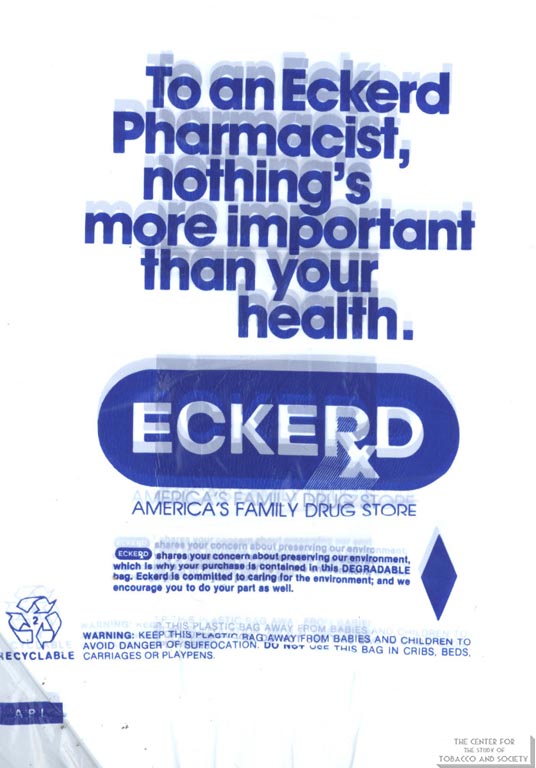 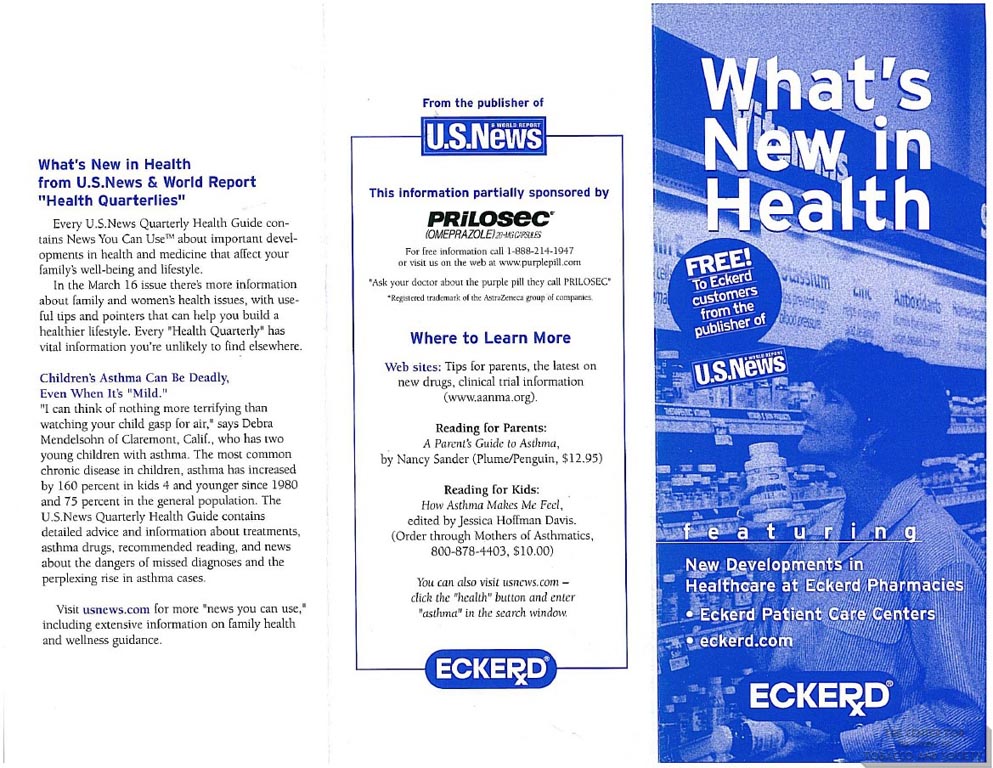 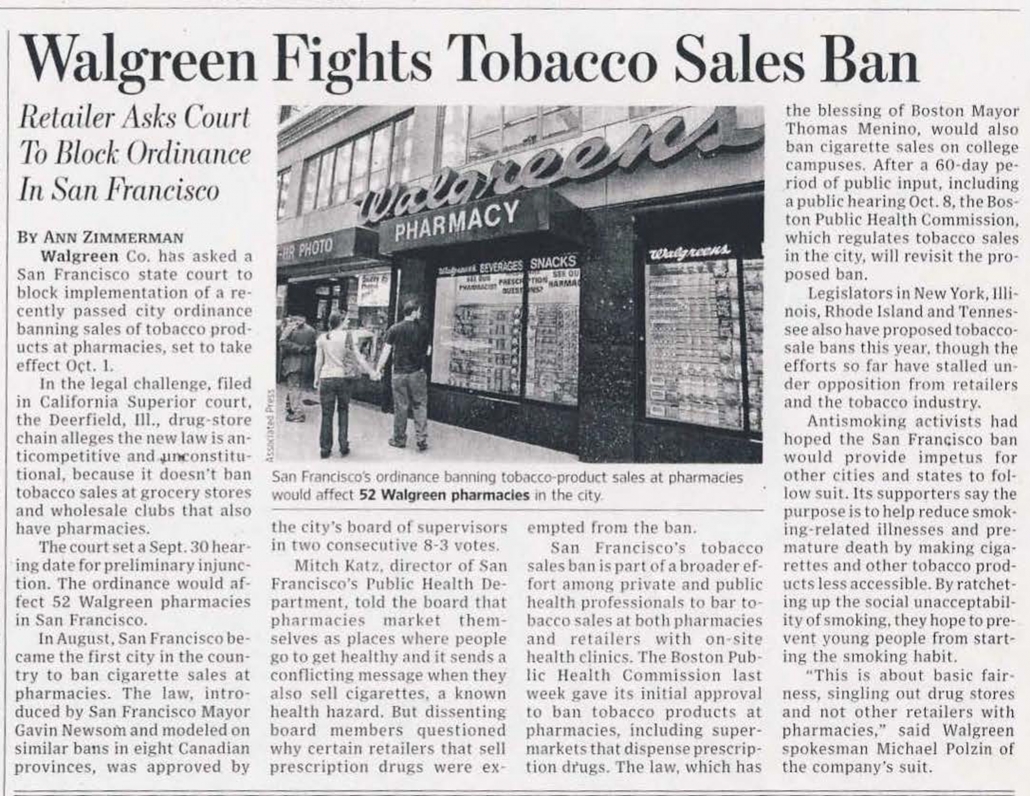 Article by Ann Zimmerman in The Wall Street Journal
September 10, 2008 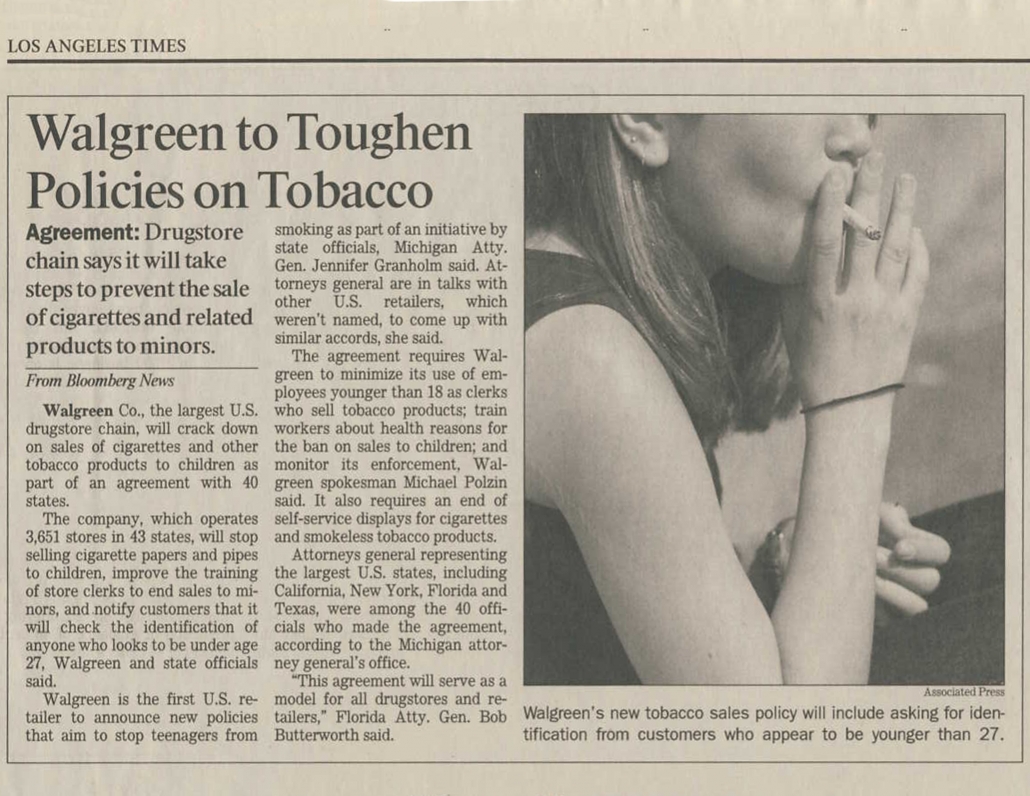 Walgreen to Toughen Policies on Tobacco

Article from Bloomberg News in The Los Angeles Times
February 14, 2002 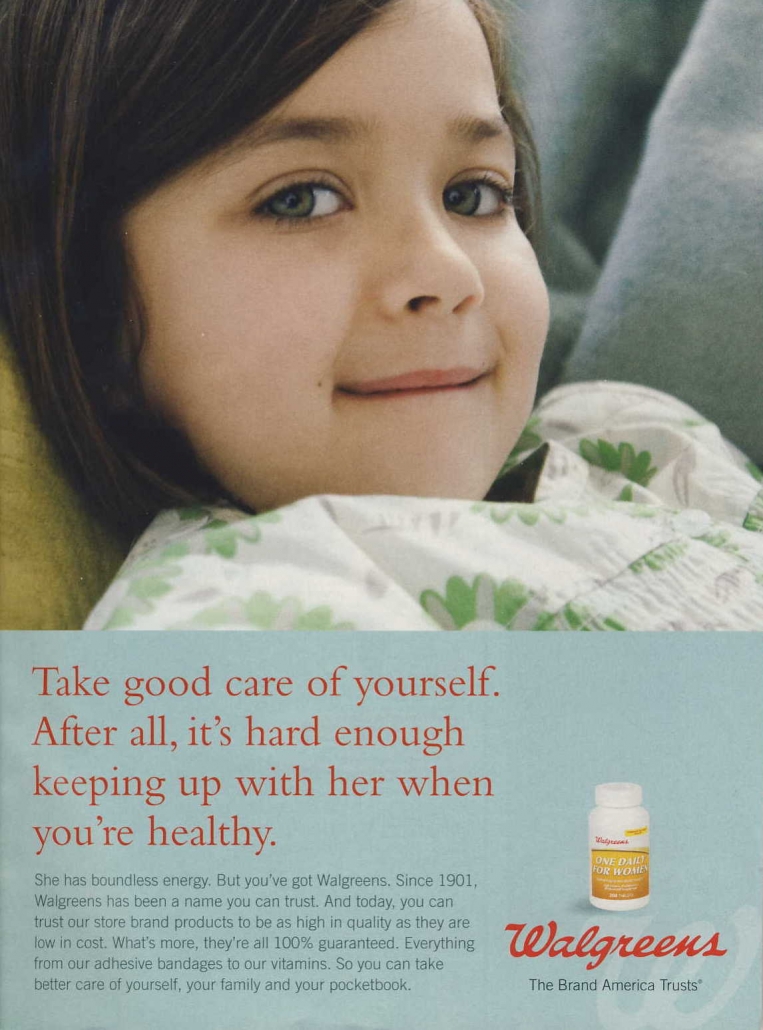 Take Good Care of Yourself

Advertisement for Walgreens in Parents magazine
2008 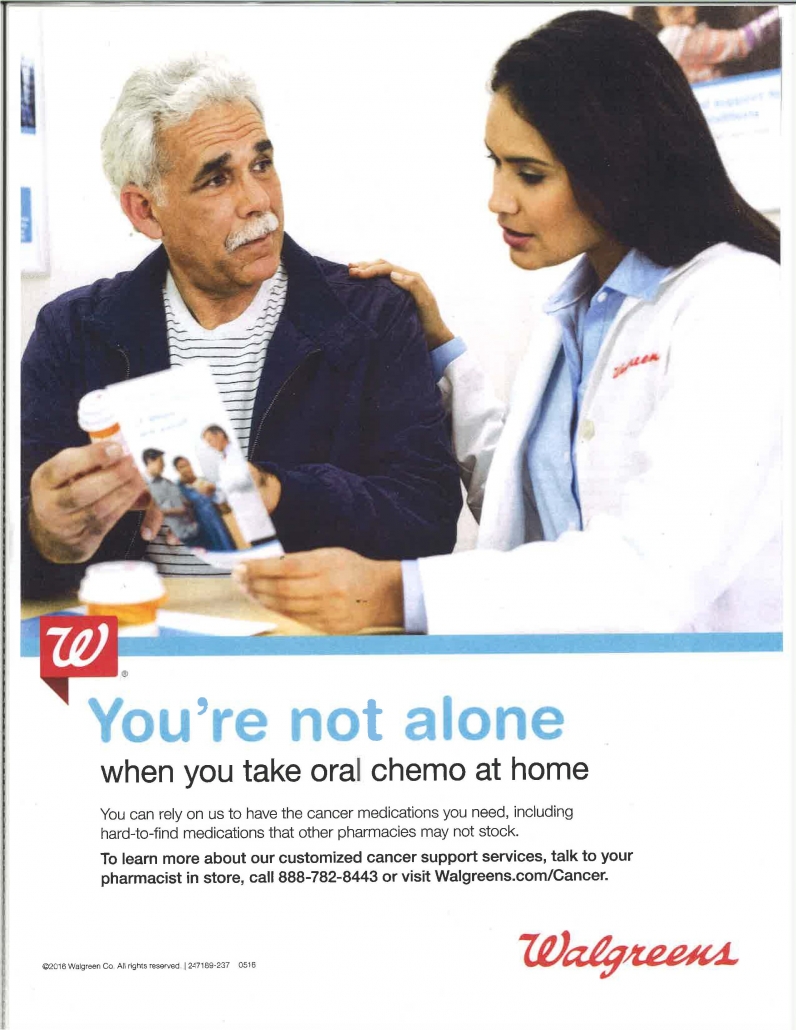