When Congress banned cigarette advertising from TV and radio, effective January 1, 1971, the tobacco industry shifted much of its cigarette advertising dollars to the print medium.  Magazines such as Time, Newsweek, US News & World Report, Sports Illustrated, Playboy, Popular Science, Ebony, Rolling Stone, Glamour, and Mademoiselle all published numerous cigarette advertisements in each issue throughout the 1970s, 1980s, and 1990s.  Along the way, editorial content on the dangers of smoking virtually disappeared from their pages.

A cover story in Newsweek in 1977 entitled, “What causes cancer?” listed the top ten causes of cancer in alphabetical order in such a way that arsenic and asbestos seemed the most alarming.  Another Newsweek cover story, “Keeping America fit,” featured an ad on the back cover for Merit cigarettes.  In 1990, US News and World Report asked, “What causes heart disease?” yet devoted most of the story to cholesterol with only a passing reference to cigarette smoking. In 1986, publisher Gloria Steinem of Ms. defended her magazine’s dependence on cigarette advertising even in its annual health issue, claiming that it could not otherwise remain in business.

Cigarette advertisements continue to appear in virtually every issue of Time, Sports Illustrated, Ebony, Rolling Stone, and Wired, and stories in these about the ongoing epidemic of smoking-caused diseases seldom if ever appear. 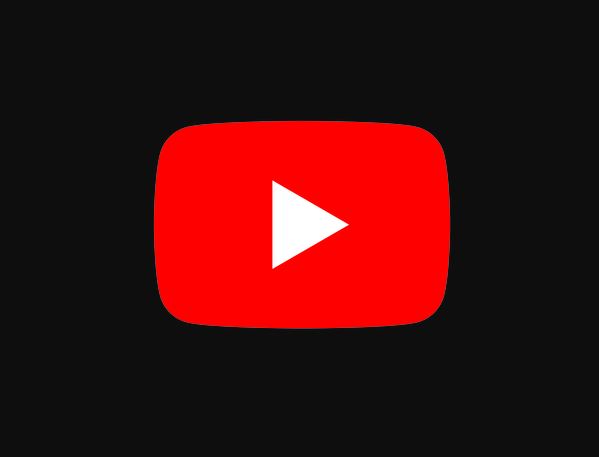 Alan Landers (Alan Stewart Levine) was an American male model and actor, Landers was best known as the “Winston Man” appearing in advertisements for R.J. Reynolds’s Winston cigarettes. Landers became an anti-smoking advocate and an an interview said, “Looking back on my career, I am ashamed that I helped promote such a lethal and addictive product to the children and adults of this country.”

When diagnosed with cancer from his lifetime of heavy smoking Landers admitted, “”When I got the diagnosis, I thought about killing myself, but that didn’t last. The tobacco companies have been waiting for me to die for years and I haven’t. I’m not going to give them the satisfaction of beating me.” Landers died in 2009 of cancer of larynx, after having survived lung cancer and heart disease brought on by heavy smoking.

David Goerlitz was featured as the rugged and adventurous Winston Man, R.J. Reynolds analog to Philip Morris’ Marlboro man. Continuously menaced by helicopters Goerlitz’s Winston man climbed mountains and seized the day without care to life, limb, or devastating inferno as he even lit up on the tarmac as a storm chasing aircraft idled behind him.

Goerlitz later became an outspoken anti-smoking advocate who gave talks to school children about the dangers of smoking, however Goerlitz became disillusioned with the anti smoking movement and controversially spoke out about his views on the anti smoking industry, government and the tobacco industry. In recent years Goerlitz has promoted a line of vaping juices on social media, further confounding his legacy.

Merlin K. “Monty” DuVal was featured in the Chesterfield ad featured below that portrayed him as a World War II Navy pilot taking on the Japanese Imperial Air Crops with the slogan, “They Keep on Scoring for MILDER BETTER TASTE”, a play on the ace’s score of enemy planes shot down. DuVal stated that his modeling career was a means to pay for his medical schooling and at the time he smoked only Lucky Strikes.

Doctor DuVal would complete his medical degree and serve as an assistant secretary with the U.S. Department of Health, Education and Welfare, and became Dean of the University of Arizona College of Medicine.

“It came out like I was promoting smoking, when all I wanted to do was make a statement.”

Gary S. Cooper was a businessman who became a model by chance, he was spotted by a representative of the R.J. Reynolds Tobacco company after giving a testimonial during a survey for Vantage cigarettes. Cooper was featured on ads for Vantage that ran in TV Guide, Time, Newsweek, Playboy and newspapers across the country. The notoriety he received was unwelcome as prankster called him relentlessly to say that he was stupid for smoking. After several weeks for harassment Cooper requested the ads featuring him be withdrawn and he quit smoking.

Following publication of the December 1985 issue of the New York State Journal of Medicine, devoted to a consideration of the world tobacco pandemic the editor Alan Blum, MD was contacted by Vincent T. Connolly of New York City, who shared a story bout the model in the Chesterfield Cigarette advertisement on the Journal’s cover with the unintended ironic slogan “after a man’s heart”. Mr. Connolly revealed that the model was his wife Maria Font Connolly, 63, she was sixteen years old when she posed for the illustration by Bradshaw Crandall, and 17 when the ad appeared. In order to get work she made herself several years older in her resume. Mr. Connolly emphasized that Maria “has never smoked, despite posing for several different cigarette ads.” At this time,” he added, “she is afflicted by cancer of the colon which metastasized in 1974, she has been on 5 FU (orally) since 1975. She also had 31 days of radiation. There are severe side effects to this therapy despite her longevity. He concluded “my brother died very quickly at age 60 with both lungs blackened by the ugly things.”

Dave Morris was featured in ad campaigns for Brown and Williamson’s cigarette brand, Fact. In 1984, Morris suffered paralysis in his leg and upon seeking treatment was told that he had lung cancer so advanced that it had spread to his spine and brain causing the paralysis. Morris lingered in the hospital for 40 more days, an agonizing death as he deteriorated, his body weakening and wasting away, and eventually passed away. 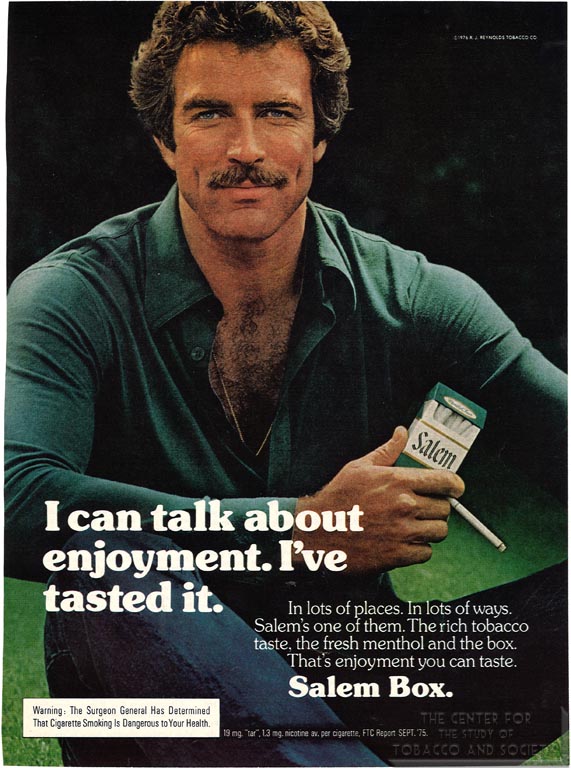 I Can Talk About Enjoyment. I’ve Tasted It. 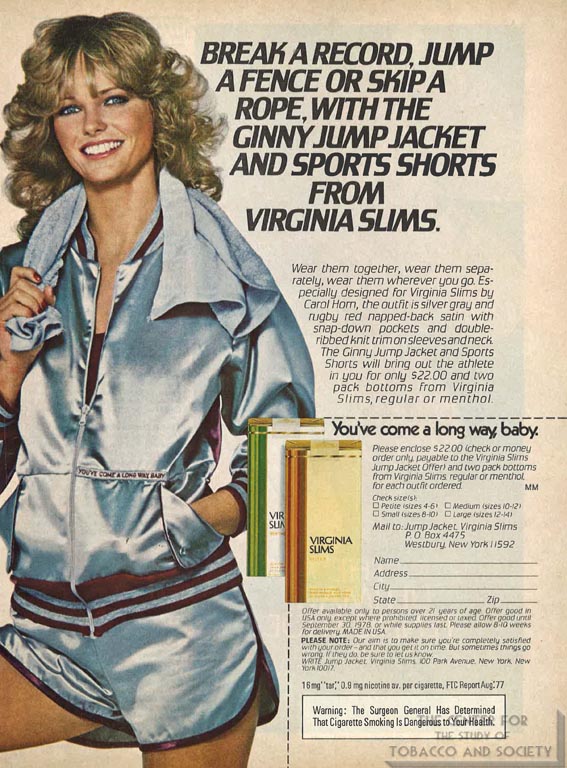 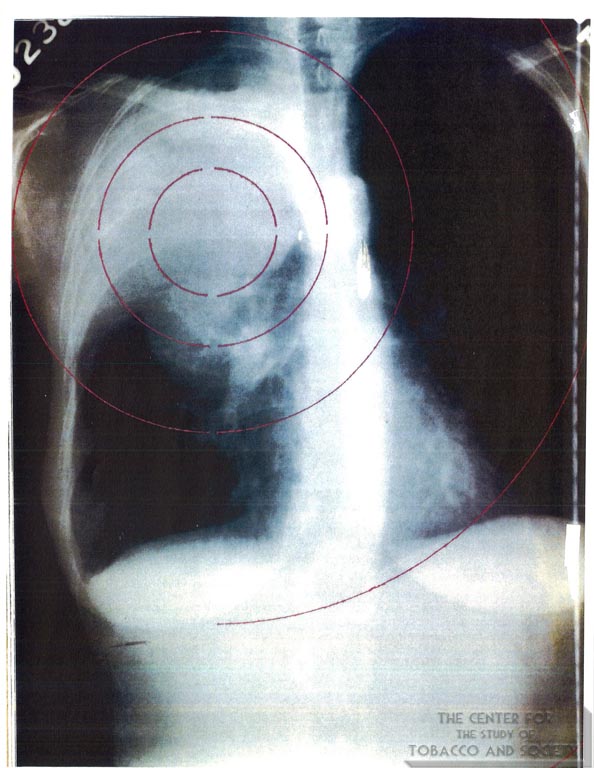 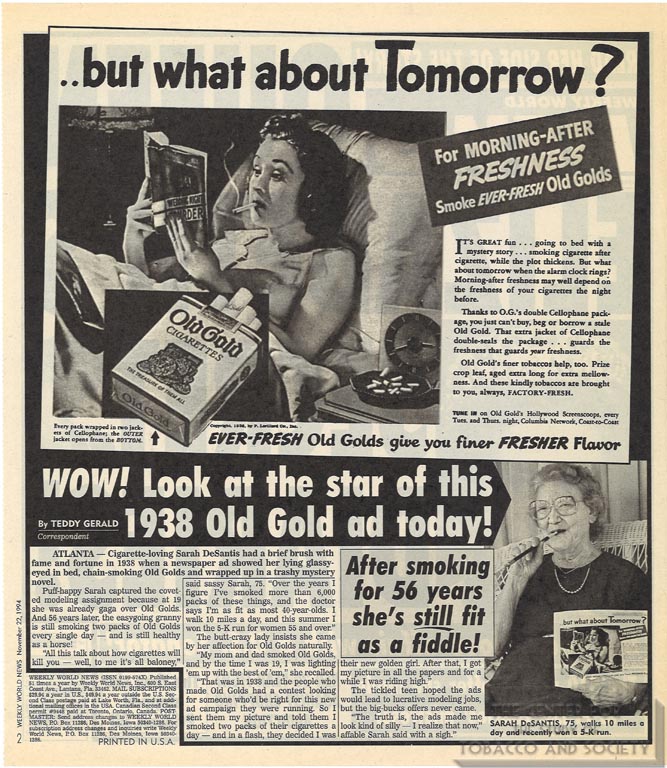 Look At The Star Of This Old Gold Ad