ONGOING RELATIONSHIPS BETWEEN THE TOBACCO INDUSTRY AND UNIVERSITIES

An Insidious Obstacle to Tobacco Control

Alan Blum, MD, (ablum@ua.edu)
The University of Alabama Center for the Study of Tobacco and Society (csts.ua.edu)

According to the Americans for Nonsmokers’ Rights Foundation, there are now 2,599 smoke-free campus sites. Of these, 2,162 are 100% tobacco-free, 2,233 prohibit e-cigarette use, and 571 prohibit vaping or smoking marijuana. However, progress .in reducing cigarette, smokeless tobacco, e-cigarette, and hookah use among U.S. university students has slowed. Prevalence may be as high as 25%. Globally, reported smoking prevalence among university students ranges from 14% in Brazil to 60% in Bangladesh. A little-studied obstacle to reducing tobacco use among university students is the ongoing financial ties between the tobacco industry and universities. Coordinated strategies to diminish the influence of the tobacco industry in academia are lagging and require greater attention by tobacco control proponents. 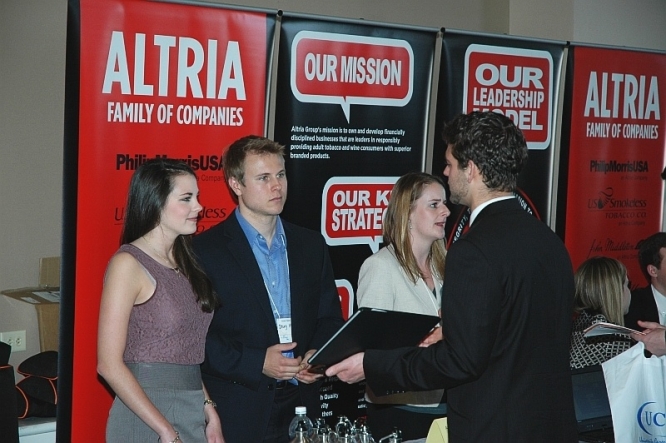 Altria Family of Companies Booth At University of Alabama Career Center in 2014. 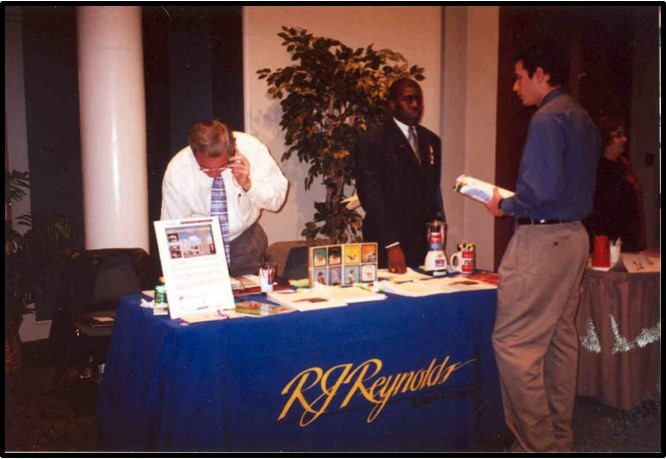 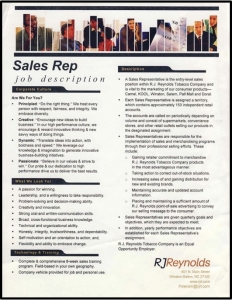 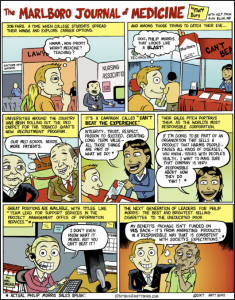 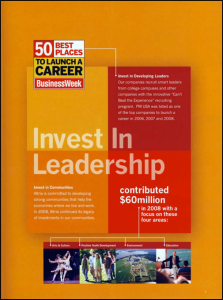 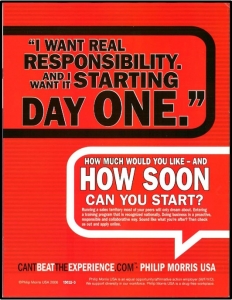 “How Much Would You like and How Soon Can You Start?” 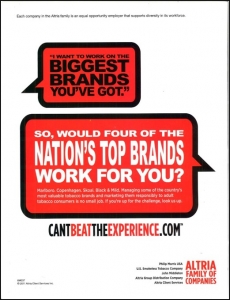 “So, Would Four Of The Nation’s Top Brands Work For You?” 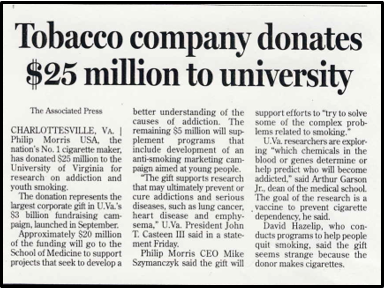 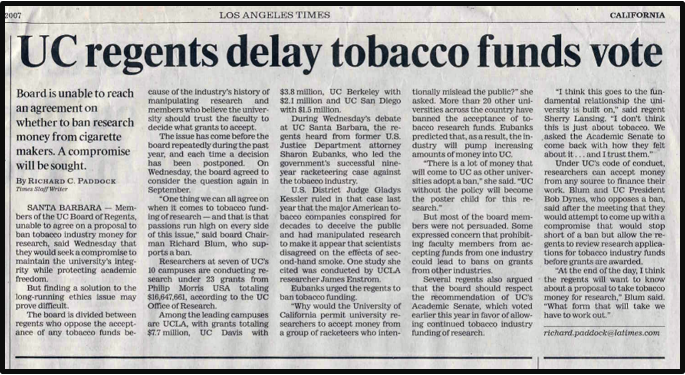 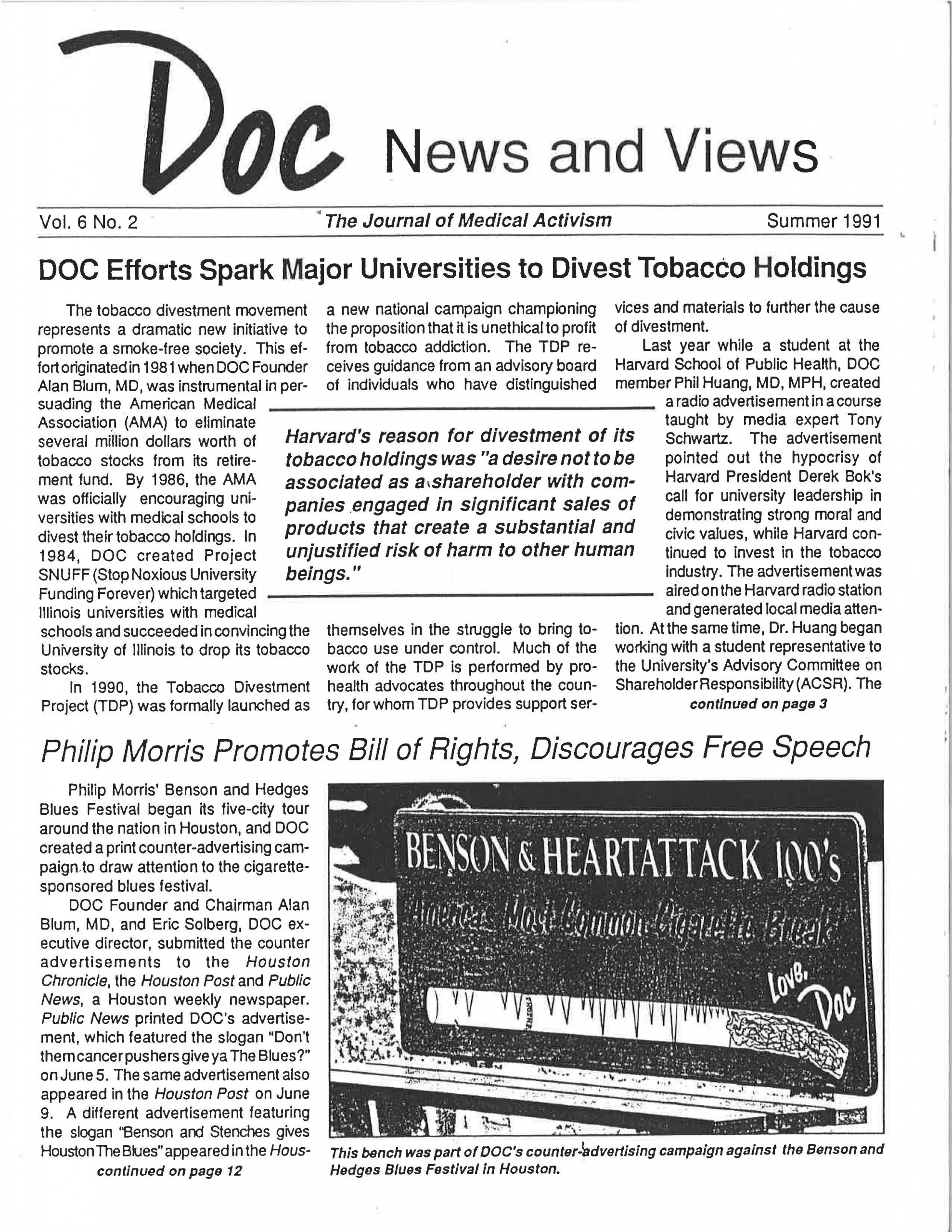 In 1984, the U.S. physicians’ activist group Doctors Ought to Care (DOC) created Project S.N.U.F.F. (Stop Noxious University Funding Forever) to influence universities with medical schools to divest tobacco stocks from their endowments. The University of Illinois and a handful of other institutions agreed. Most others did not. In 1990 George Rupp, the president of Rice University, holder of the most tobacco industry stock by any university in the 1990s, defended its investment by claiming that the lucrative dividends helped keep down tuition costs.

Other universities with prominent medical schools that divested their tobacco stocks include Johns Hopkins University (1991), Stanford University (1998), University of Washington (2000), and University of California (2001). Not all divestment efforts were successful, however. The University of Texas (UT), with its world-famous reputation for the treatment of cancer at its MD Anderson Cancer Center, invested almost $50 million in tobacco stocks. In 1991, a single student, Ron Turk, aided by DOC, succeeded in persuading half of the Board of Regents to vote to divest tobacco stocks, but the chairman broke a 4-4 tie by voting to retain the investment. As a consolation, the board passed a resolution banning smoking on the entire campus. 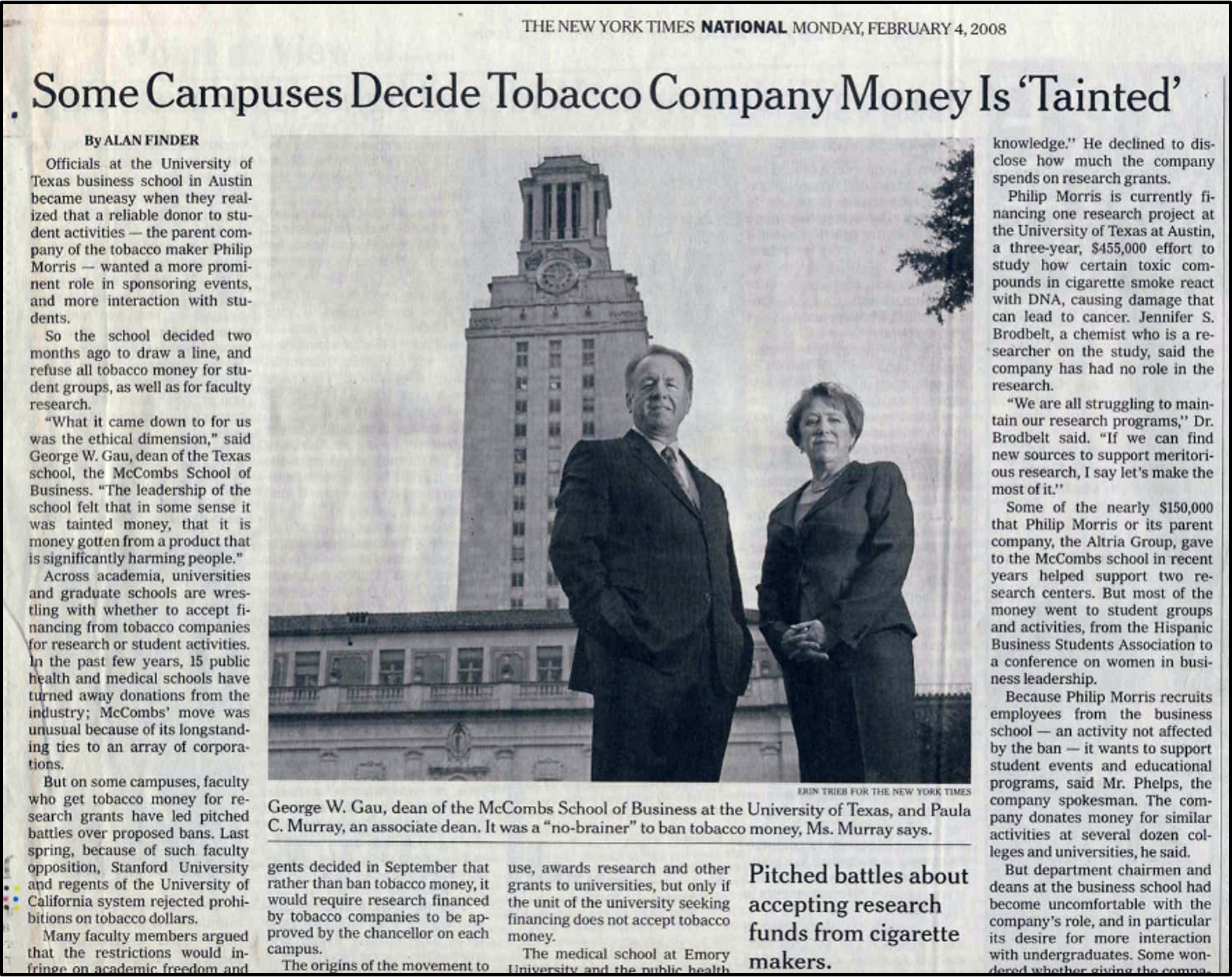 In 1986, Alan Blum, MD, attended a public meeting in New York City on ethical investing convened by an organization called the Council on Economic Priorities, which changed its name to Social Accountability International in 1997. Attendees discussed the immorality of colleges and universities holding shares in companies that produced items used in the manufacture of nuclear weapons or with ties to apartheid South Africa. Dr. Blum’s suggestion that institutions of higher learning divest stock held in tobacco companies was met with derision. Audience members said this would be an endorsement of abrogating freedom of choice to smoke. Only when Dr. Blum pointed out that Philip Morris held a major stake in the South African cigarette company Rothmans did the group acknowledge that divesting tobacco stocks might be worth considering.

In 1990, DOC member Phil Huang, MD, MPH, led a successful effort to convince Harvard University to eliminate $40 million in tobacco stocks from its endowment fund investments. As a student at the School of Public Health, Huang created a campus radio advertisement that pointed out the hypocrisy of President Derek Bok’s call for university leadership in demonstrating strong moral and civic values, while Harvard continued to invest in the tobacco industry. A news report further exposed the university’s hypocrisy of investing in tobacco companies while receiving $54 million in research grants from the National Cancer Institute.

Like the vast majority of universities, US academia’s largest retirement provider of financial services, TIAA (Teachers Insurance and Annuity Association), hasn’t sold its tobacco stocks, which are simply too lucrative. This means that thousands of physicians and other public health professionals who teach in medical schoolsincluding the author- also benefit from tobacco stock profits as members of TIAA.

In 1996, at the height of the lawsuits brought by the state attorneys-general against the cigarette manufacturers and when public enmity toward the industry was growing, TIAA created a separate investment fund, the Social Choice Account, as a tobacco-free vehicle for retirement investors. But TIAA has rebuffed all calls to sell its vast tobacco stock holdings. In its 2017 annual report, TIAA lists investments totaling more than $450 million in Philip Morris International, maker of Marlboro, the world’s best-selling cigarette, and its counterpart Altria, which controls over 50% of the US cigarette market. TIAA is thus one of the biggest investors in Big Tobacco.

Nor has TIAA stood with the Interfaith Center for Corporate Responsibility in its shareholder resolutions aimed at curbing the tobacco industry’s aggressive expansion into Africa, Asia, and Eastern Europe. 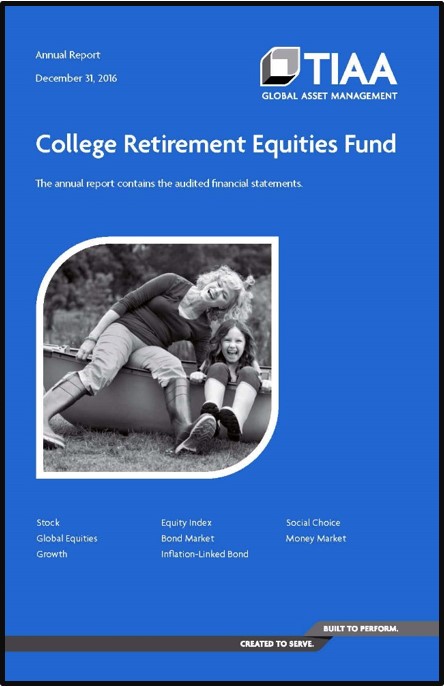 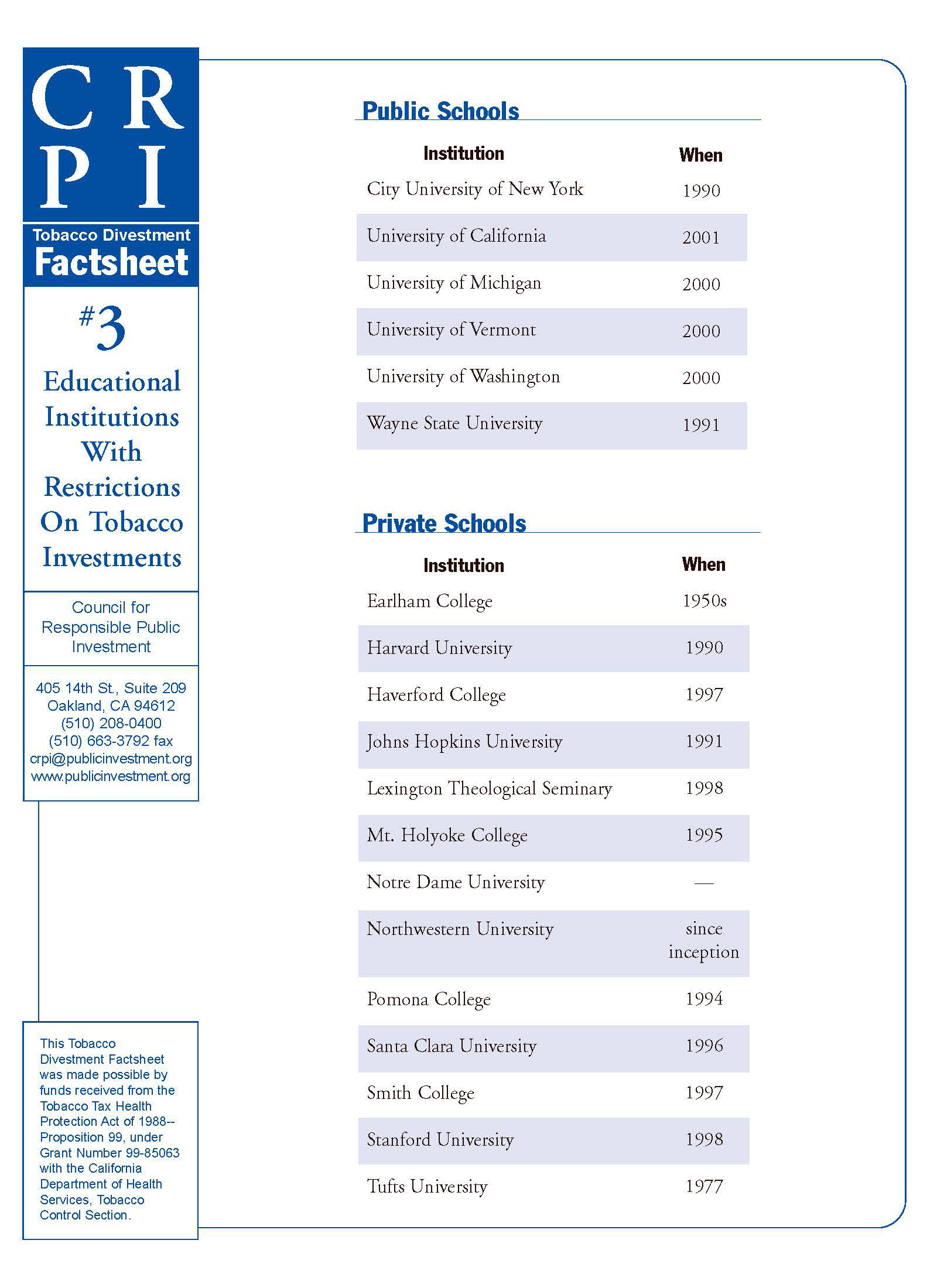 Several universities in the US have scholarships, professorships, hospitals, and even medical schools that have been endowed by and named in honor of tobacco industry figures. Duke University has at least 27 professorships endowed by the Duke Foundation (established by James B. Duke, who the American Tobacco Company in 1890) including one in radiation oncology, as well as an RJ Reynolds Professorship of Medicine (named for the founder of the R. J. Reynolds Tobacco Company in 1890) and Philip Morris Minority Scholarships. Bowman Gray School of Medicine is named for a past president of RJ Reynolds Tobacco Company. New York University’s Tisch Hospital is named for Robert Preston Tisch, who became president and CEO of Loews Corporation in 1968, the year that the company acquired Lorillard Tobacco since absorbed into Reynolds American, the US arm of British American Tobacco (BAT). The Wharton School of the University of Pennsylvania has an endowed professorship, the Joseph Kolodny Professor of Social Responsibility in Business, named for a former head of the National Association of Tobacco Distributors. (In 2014 the university’s board voted not to divest tobacco stocks.) Virginia Commonwealth University has a Philip Morris Endowed Chair in International Business. Syracuse University has an endowed chair in business and government policy named for Louis Bantle, a past president of the United States Tobacco Company, which popularized smokeless tobacco. In the United Kingdom, Cambridge University has an endowed chair named for a former chairman of the board of BAT, Patrick Sheehy.