We Want You… to Smoke

Like all American industries, tobacco companies were eager to drape themselves in the flag. These advertisements demonstrate the convergence of patriotism, war-time mobilization, and mass marketing.

Bull Durham Smoking Tobacco was promoted to the fighting men of America as “the universal smoke of our army and navy for three generations.” These advertisements lace patriotism and the fervor of the soldier’s life into their sales pitches: “Fall in line with hundreds of thousands of red-blooded smokers,” “Rich, relishy, star-spangled taste,” “Officers and men alike all carry the ‘Makings’” 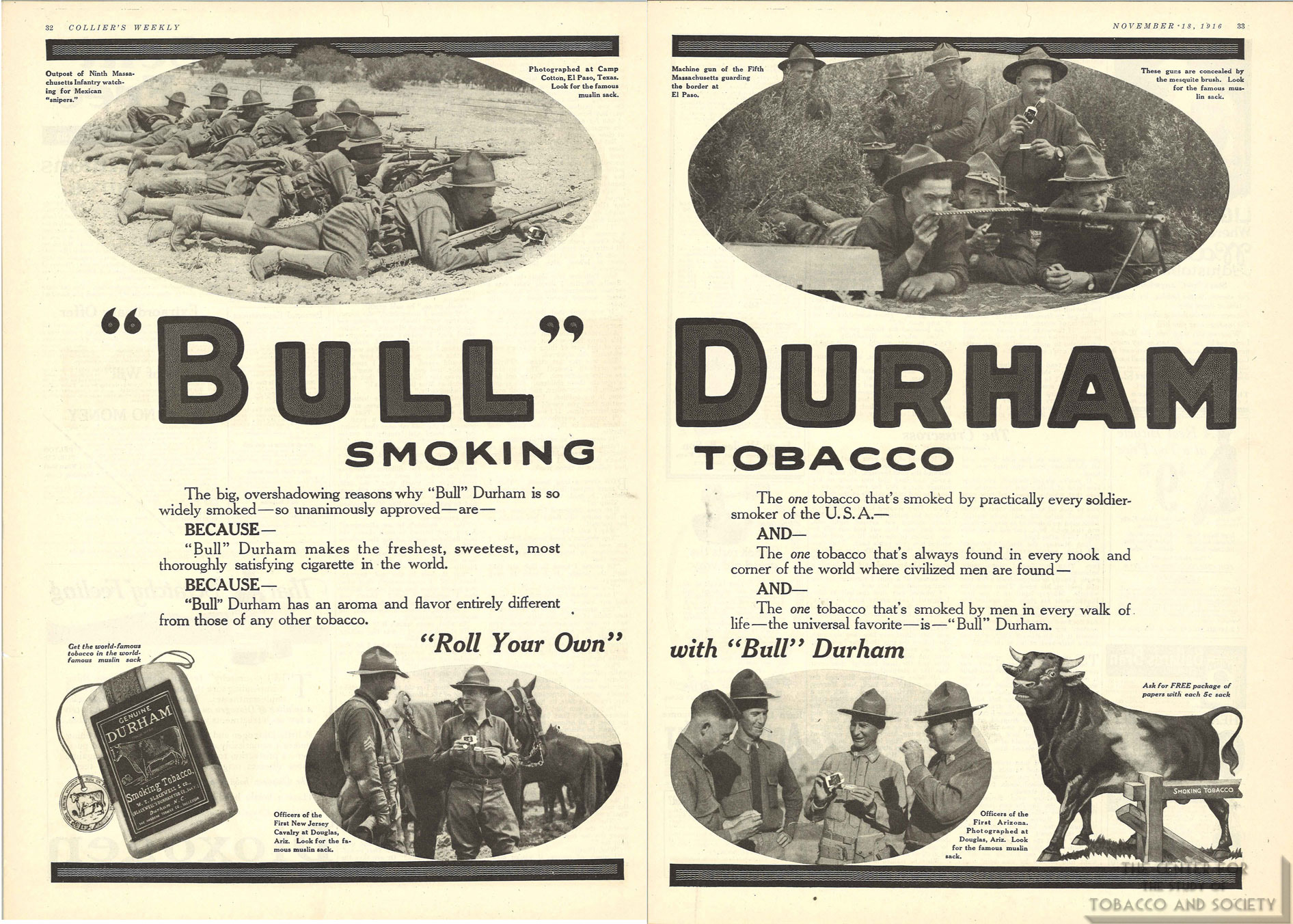 “The big, overshadowing reasons why ‘Bull’ Durham is so widely smoked…” 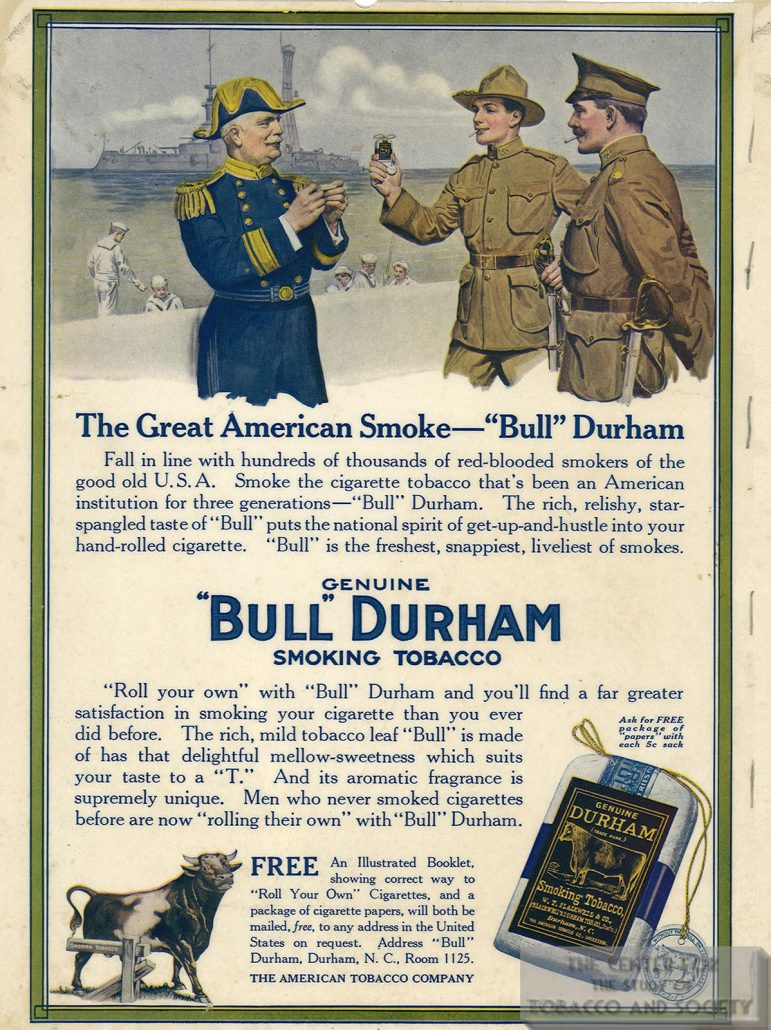 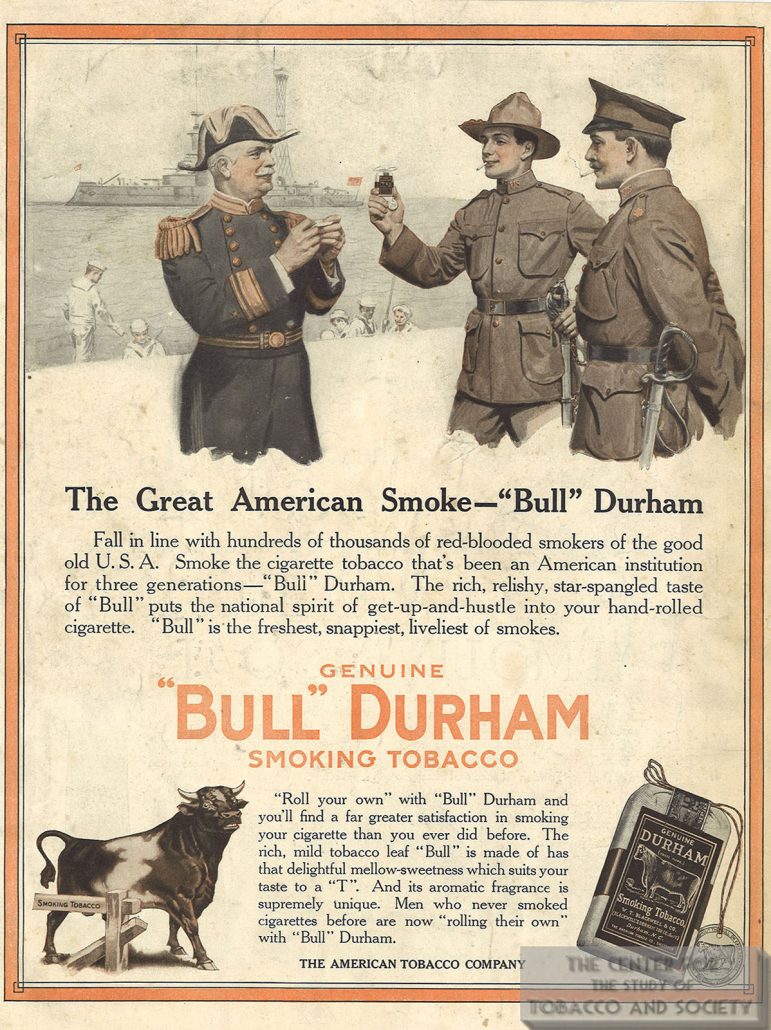 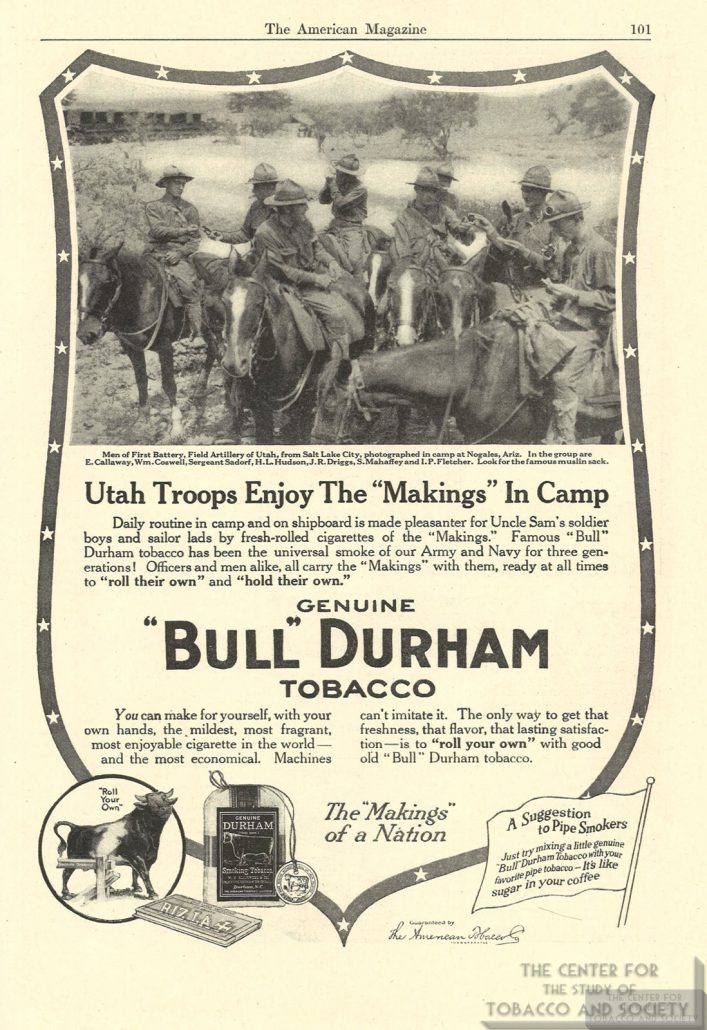 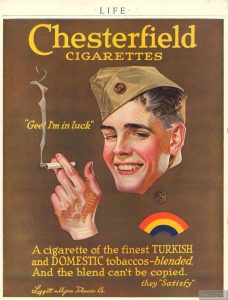 The two versions of this colorful advertisement feature a soldier from the famed 42nd Division, “The Rainbow Division.” The 42nd was among the first divisions to land in Europe from the United States as part of the American Expeditionary Force. The insignia featured in this advertisement is a later variation that was created specifically for the 42nd division. The rainbow motif would be adopted as the campaign colors of the many other American units and divisions fighting in World War I and was also used in service ribbons, campaign streamers and medals (for example, the World War One Victory Medal). 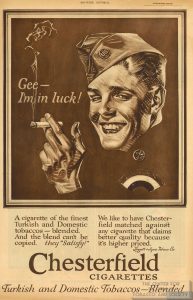 This advertisement describes Lucky Strike as a favorite for over 40 years. However, the iteration of Lucky Strike being enjoyed by the troops was a new blend. The brand was developed to compete with the milder, more aromatic, and more popular Turkish tobacco blends. It was good timing, as the war made Turkish tobacco difficult to import and prohibitively expensive for consumers. The burley tobacco used in Lucky Strike was grown in the southeastern United States. Containing little sugar, burley was dipped in sweetening additives, then aged and toasted to retain the flavor. The name comes from an older brand of tobacco from Virginia. George Washington Hill, president of the American Tobacco Company, who championed Lucky Strike, served as a Red Cross major during the war and later received an Army commission to help organize the Motor Transport Corps.12 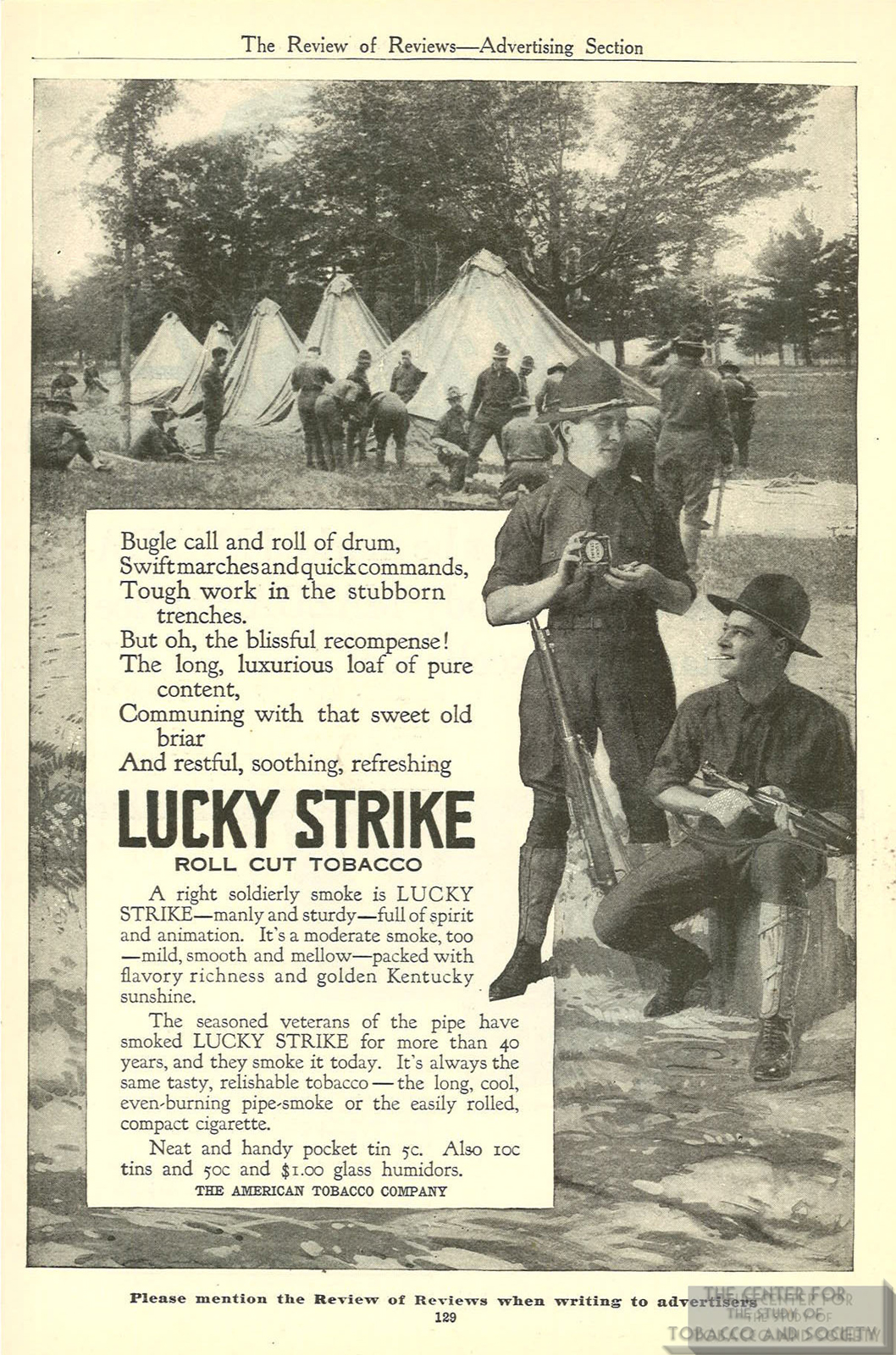 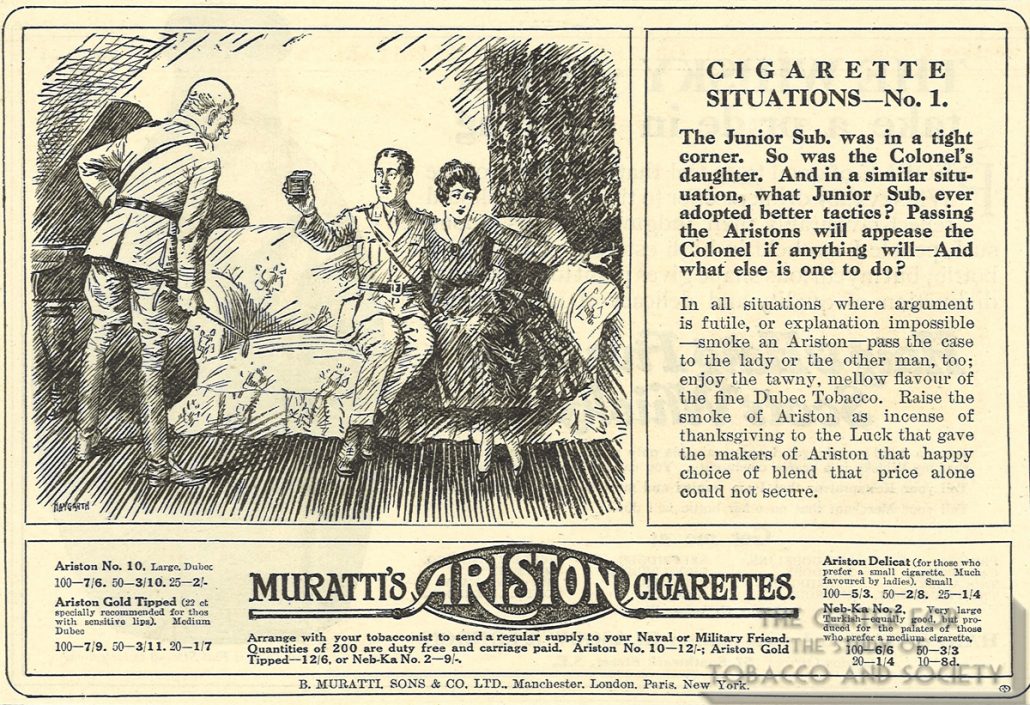 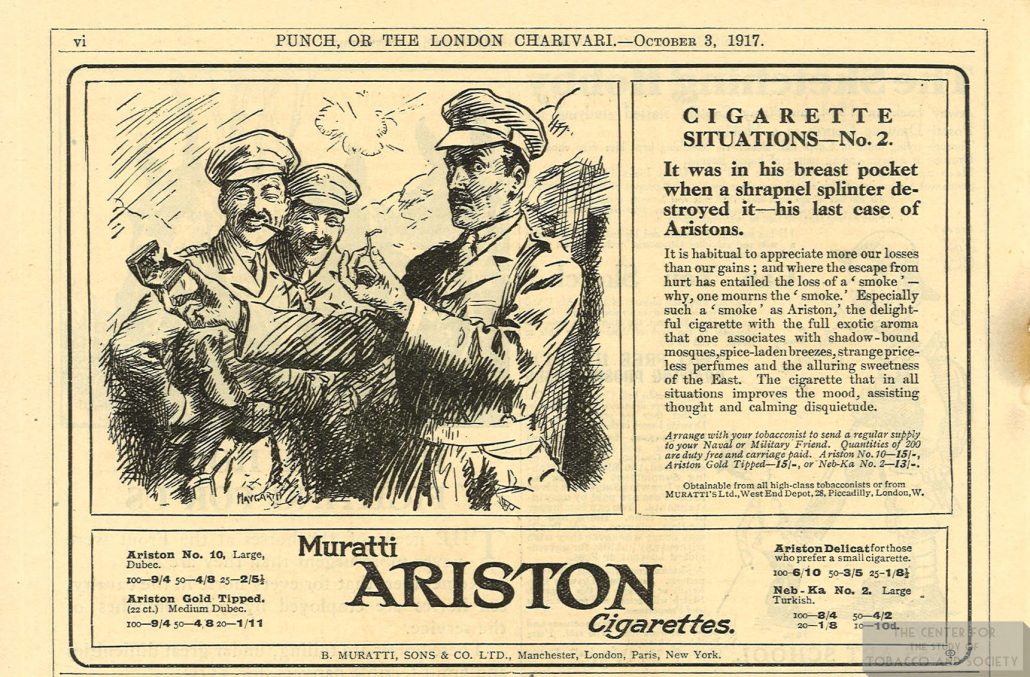 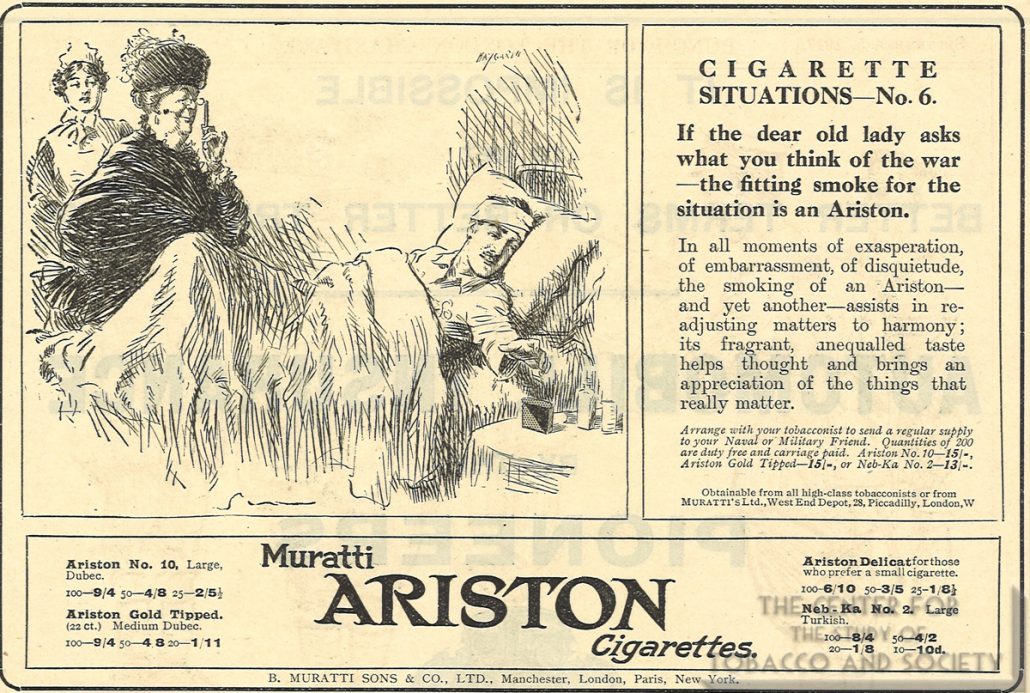 Even though the Ottoman Empire (also known as the Turkish Empire) was aligned with the Axis powers against the Allies, these brands were promoted with patriotic themes. Fatima, manufactured by Liggett & Myers Tobacco Company, included sales figures at Army camps in advertisements to bolster the claim of being the soldiers’ favorite cigarette. These brands would persist well into the 20th century but would never regain the market share they enjoyed against rivals who introduced their own Turkish blends, most notably Camel, manufactured by R.J. Reynolds Tobacco Company. 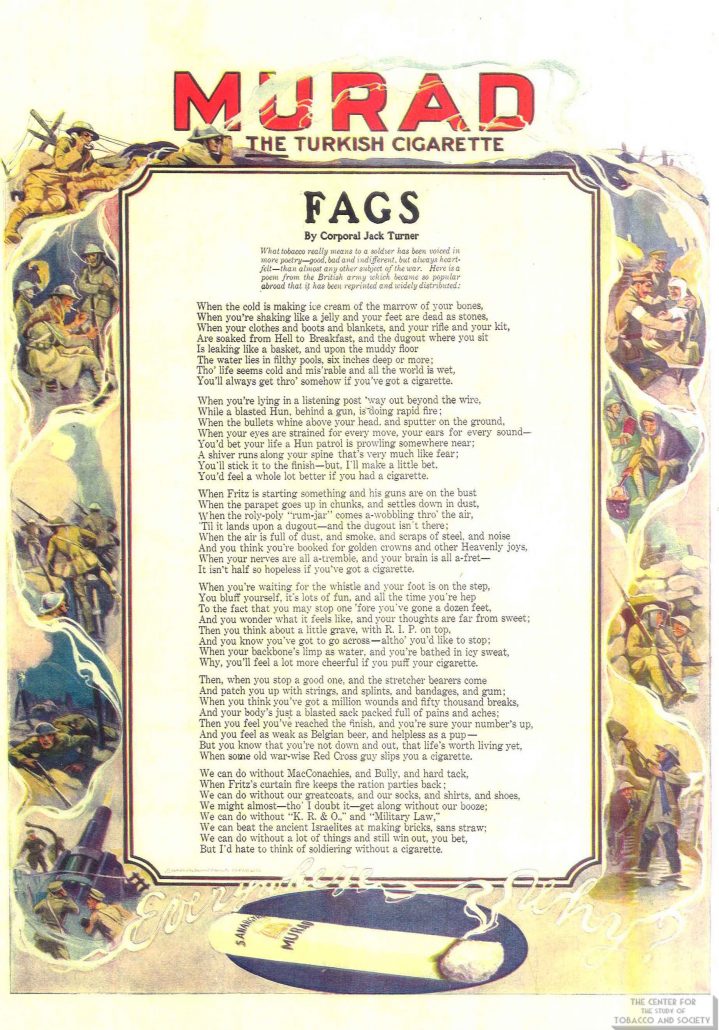 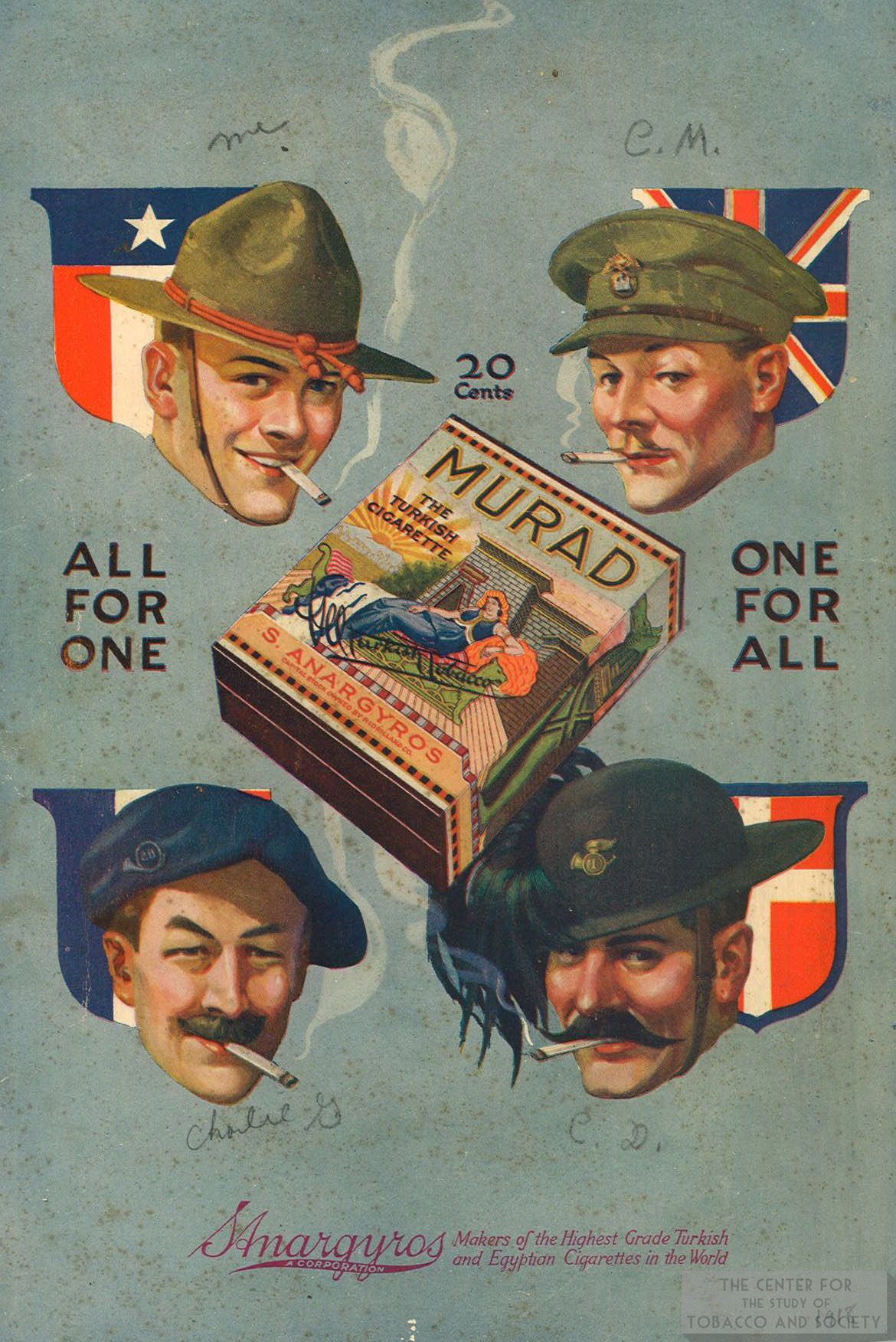 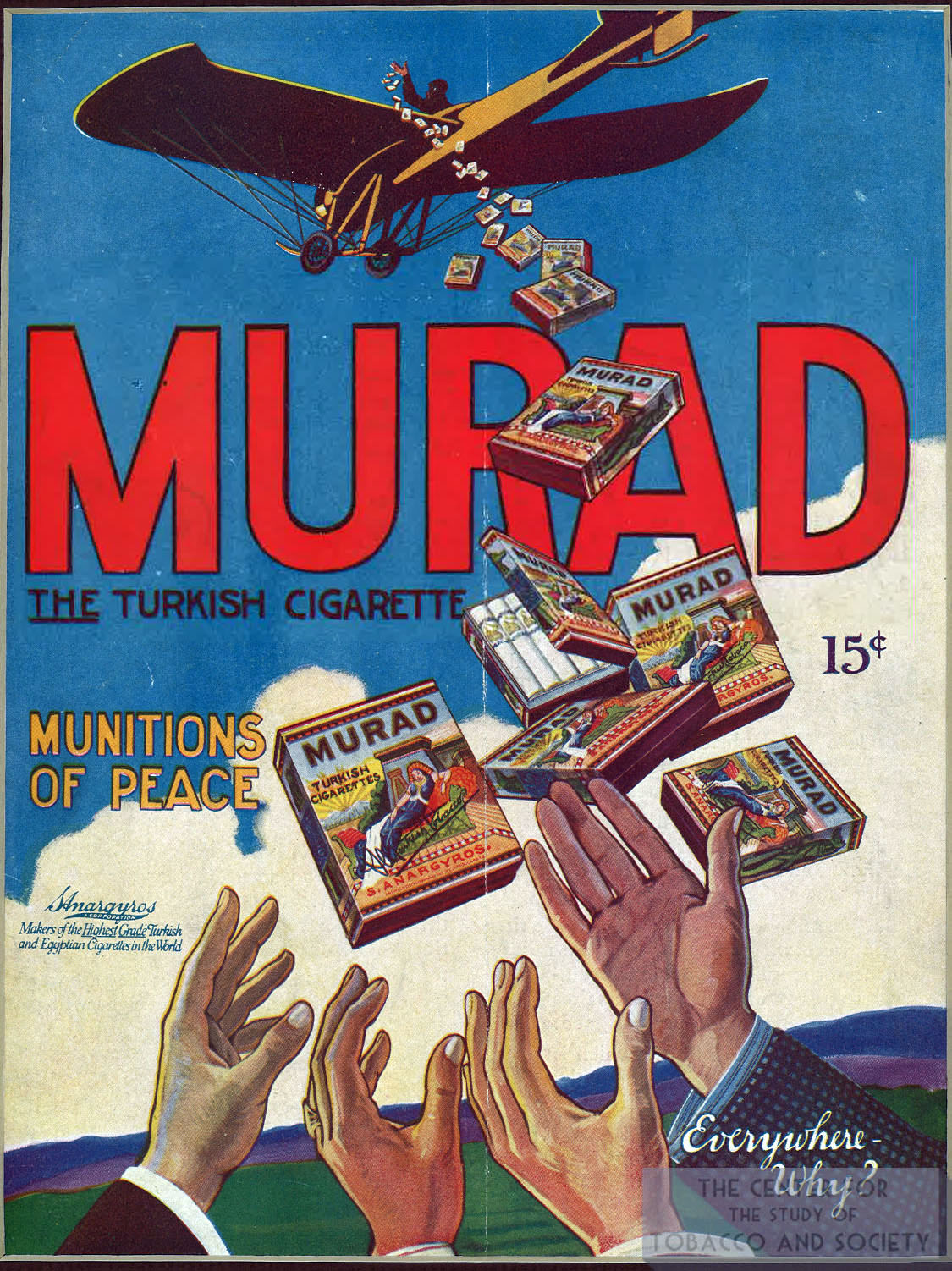 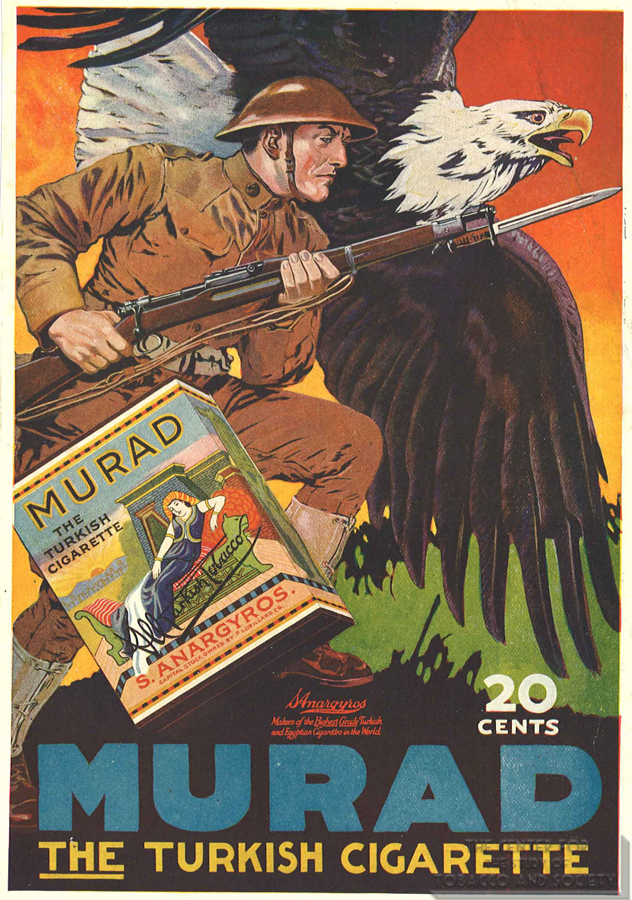 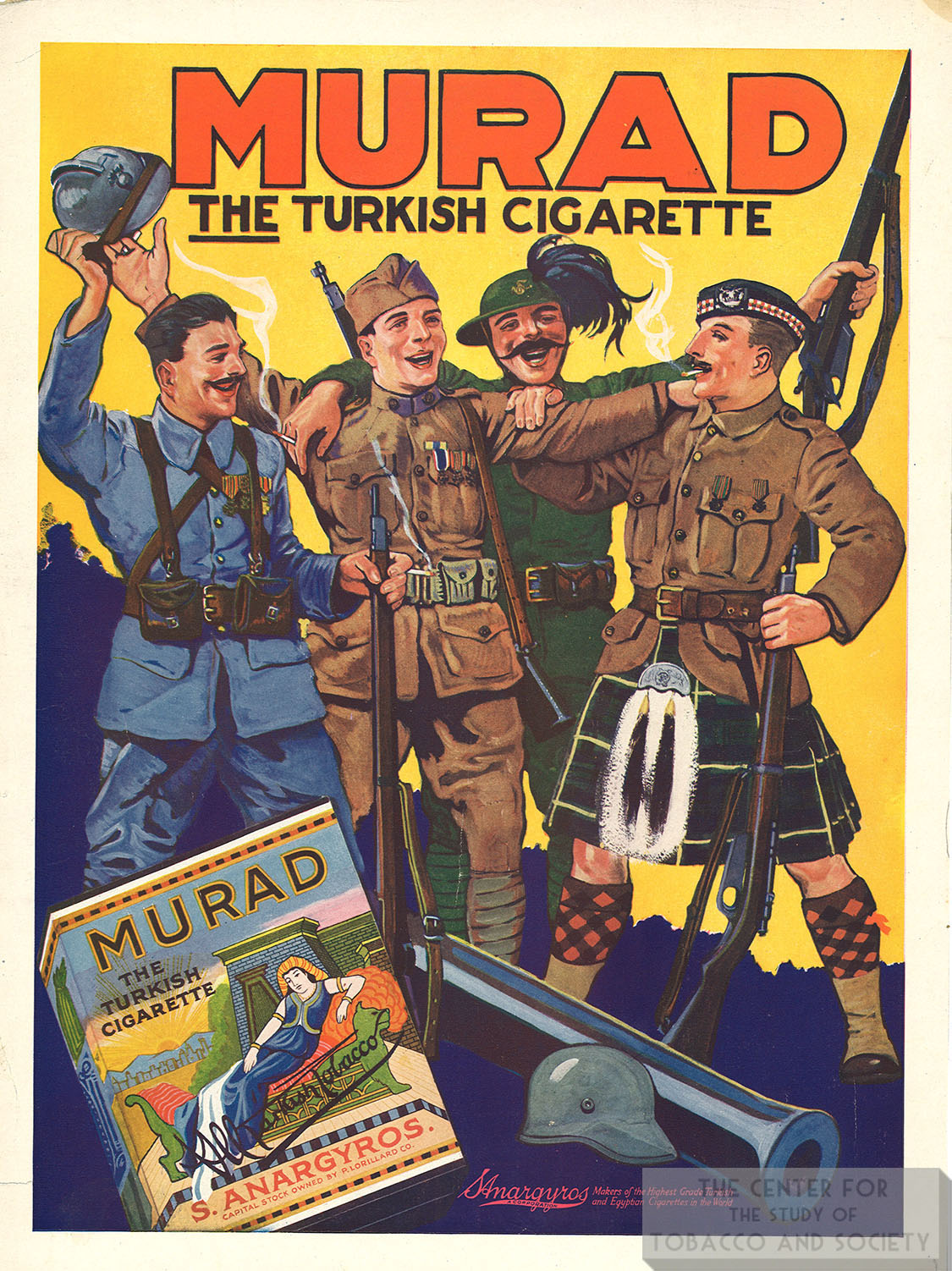 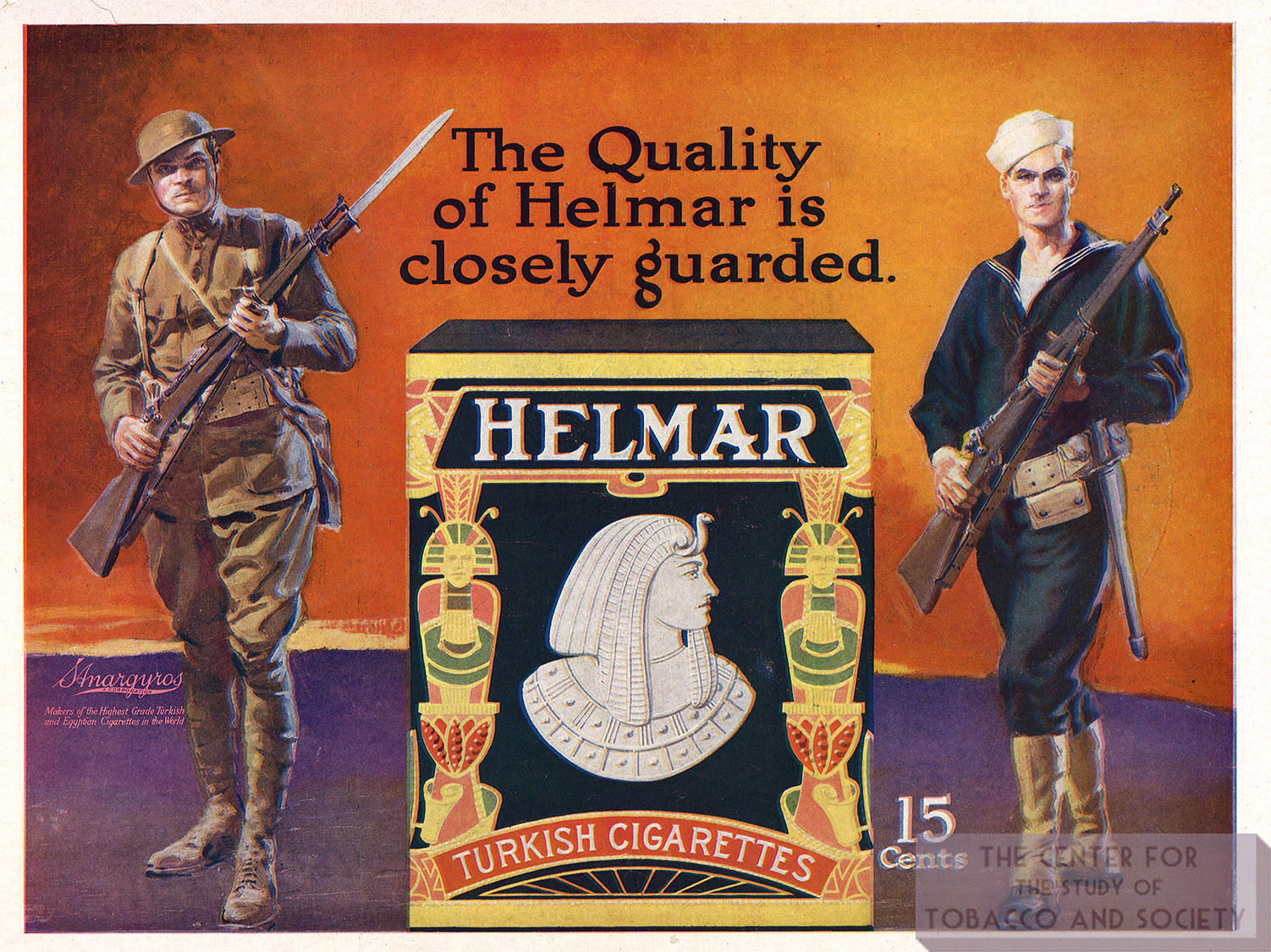 “Here and Over Seas” 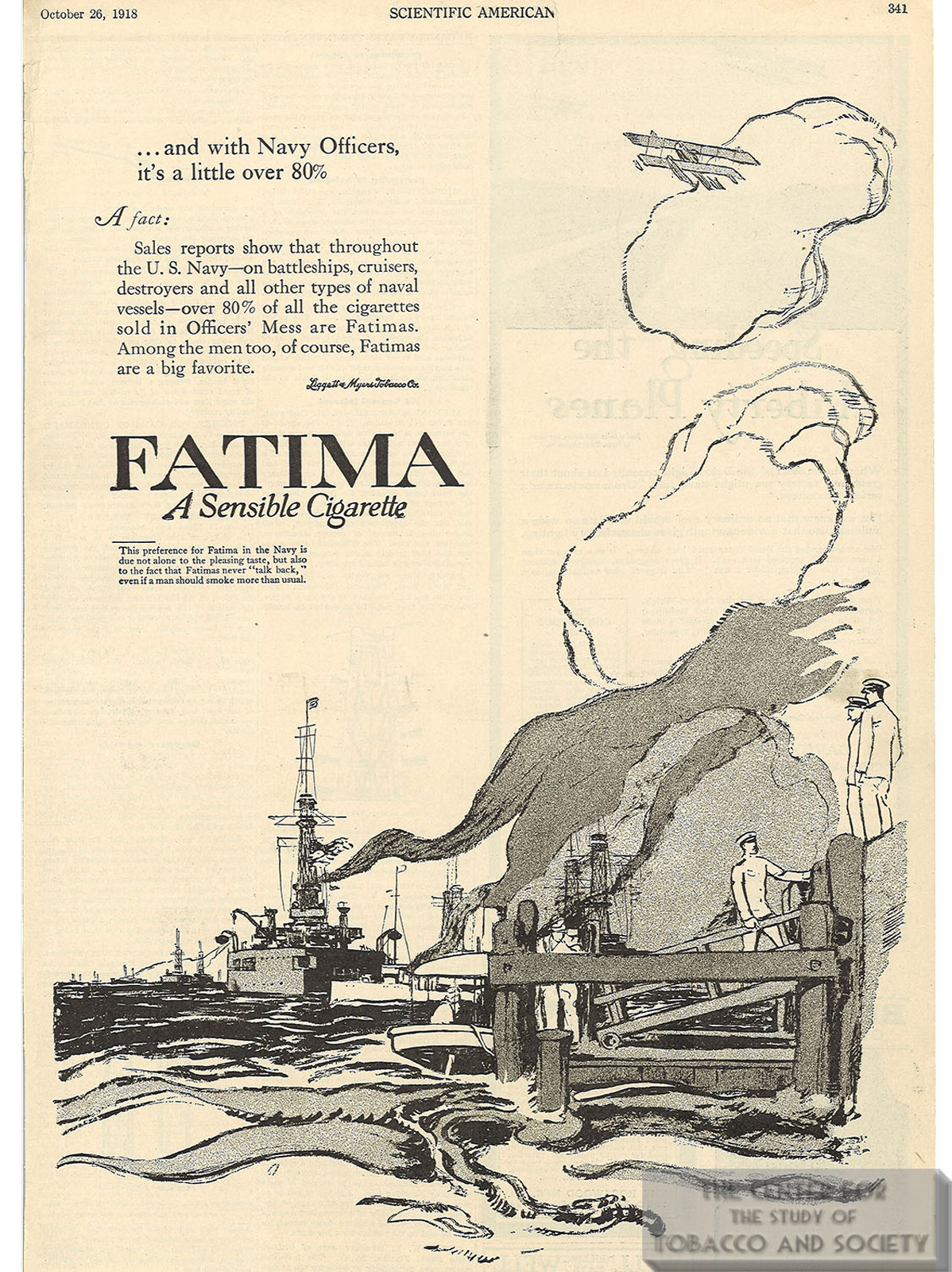 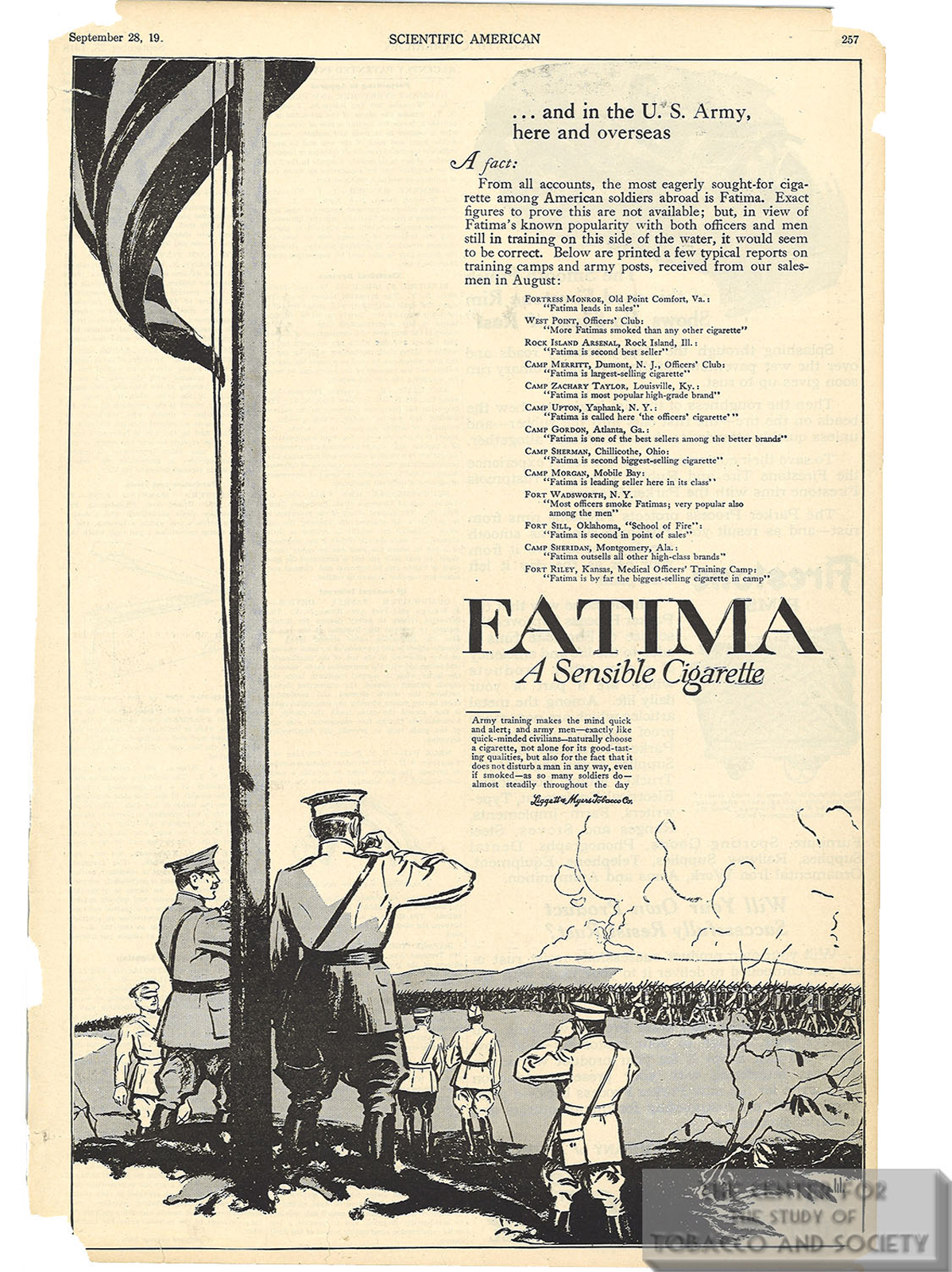 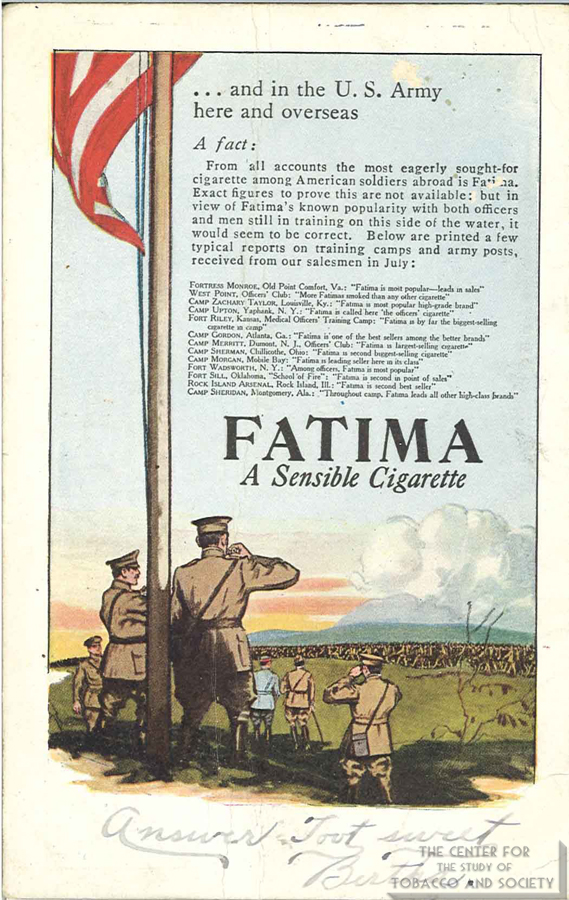 Front side of postcard featuring a Fatima advertisement.
Written by Harry A. Bertani of the 7th Division to Miss Bertha Seifert, requesting that she write to him
June 24, 1919 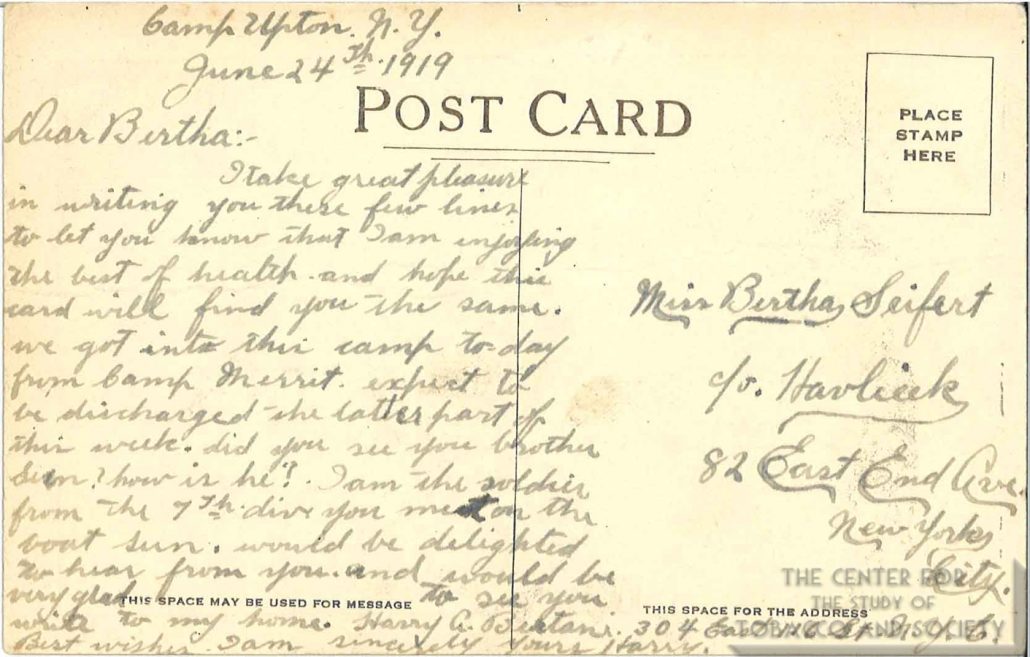 “I take great pleasure in writing you these few lines…”

Rear of postcard featuring a Fatima advertisement
Written by Harry A. Bertani of the 7th Division to Miss Bertha Seifert, requesting that she write to him
June 24, 1919

“When your son starts smoking…”

Prior to World War I smoking was seen as a rite of passage when a father welcomed his son to manhood and shared his own cigar or pipe with him. This advertisement for Girard depicts this ritual, complete with “the family’s consent” and “the company of his ‘dad.’”

The war would change this dynamic and cause a generational rift in smoking habits. Pipes and cigars became touchstones of the pre-war generation while the cigarette would be the post-war generation’s choice. The war deprived many young men of the paternal bonding experience of a first smoke, replaced by the cold comfort of a cigarette ration and the company of comrades in arms.

These tobacco advertisements aim at the parents of the doughboys in Europe, suggesting cigars and pipe tobacco as gifts or rewards for their battle-hardened boys who became men in the trenches.

“The right smoke for your son and yourself”

“Backing up these boys”

“Come smoke a good luck pipe with me” 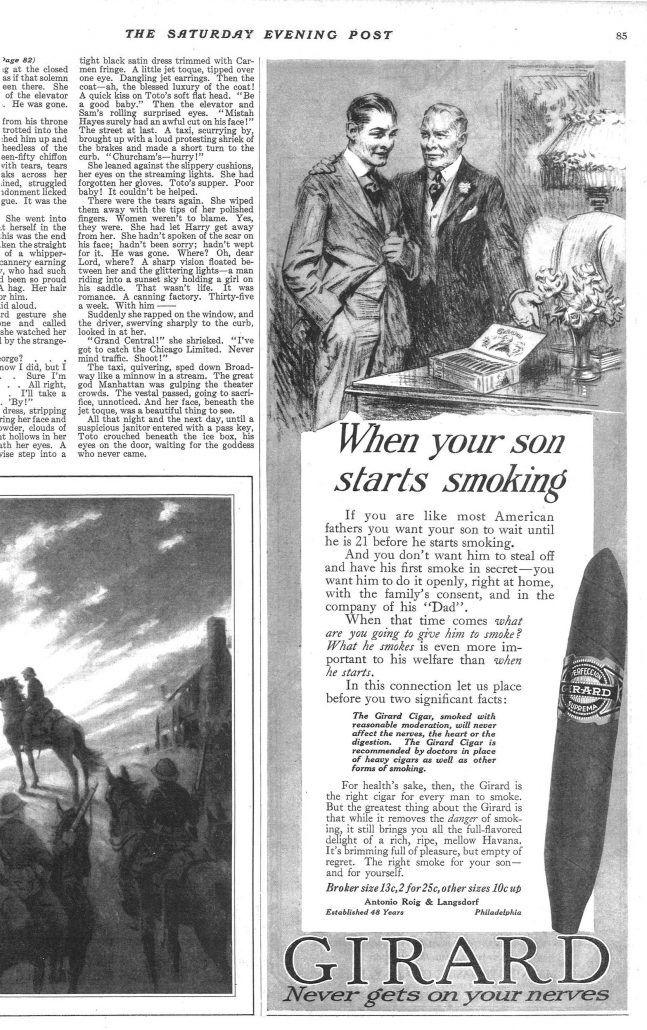 “When your son starts smoking” 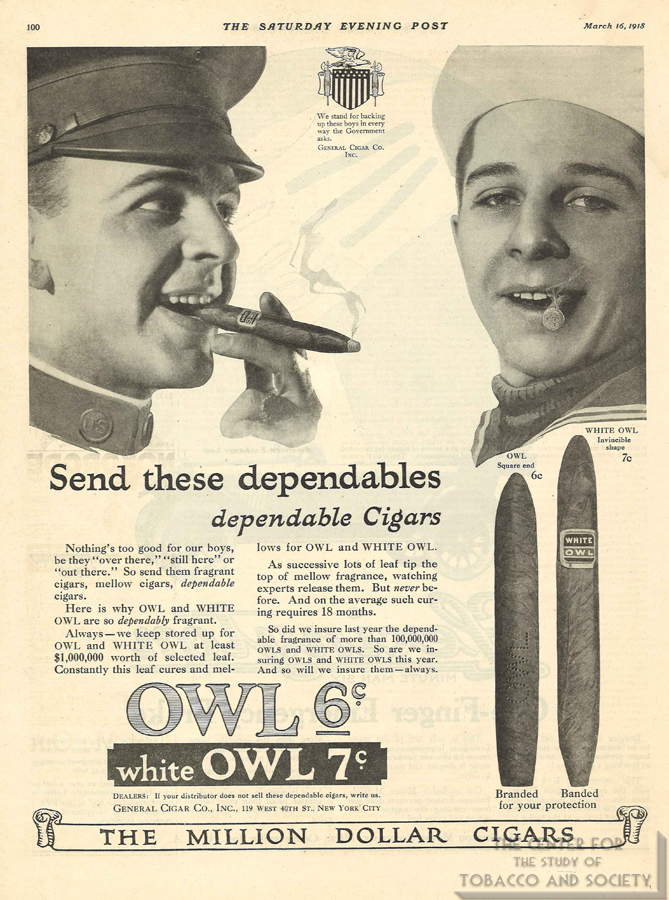 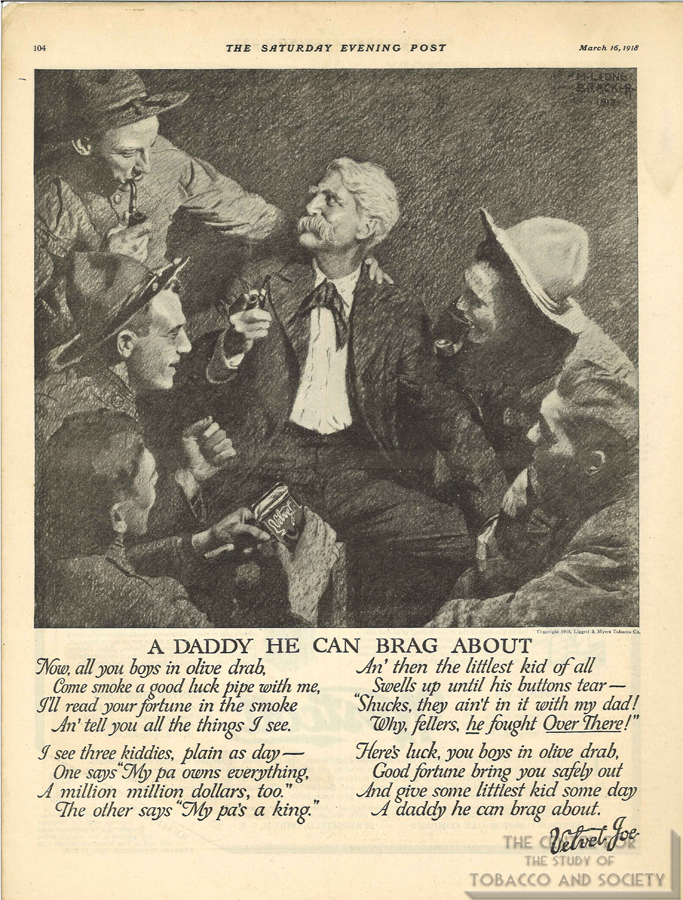 “A Daddy He Can Brag About” 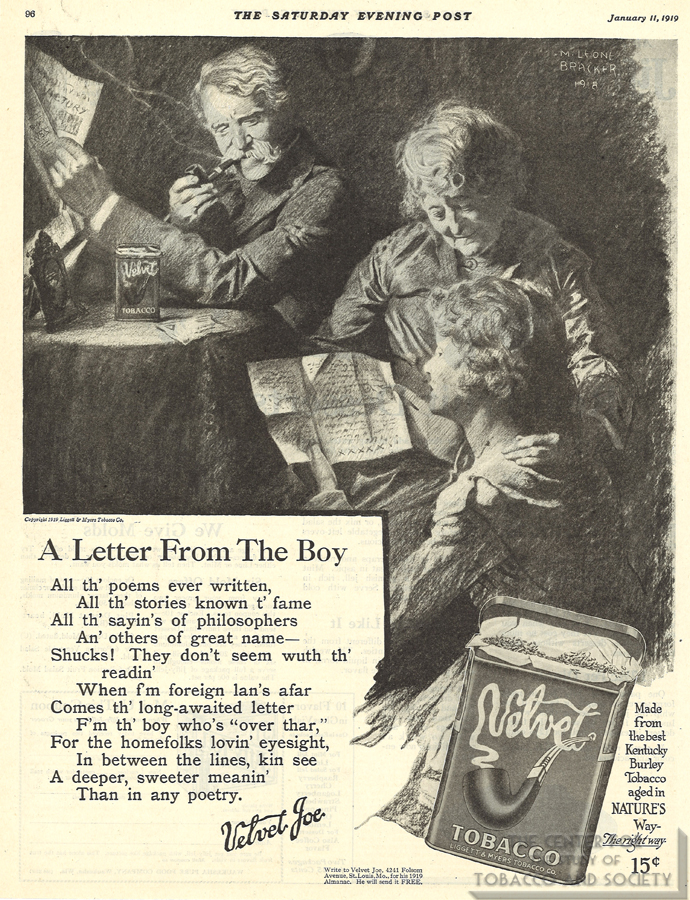 “A Letter From The Boy”