“The opioid crisis is horrific. It has been estimated that perscription opioids have killed more than more than 200,000 Americans and 47,000 lives are expected to be lost in 2019 due to opioid addiction. No similar outrage has been expressed by artists, health organizations or the public at the most dominant corporate sponsor of the arts in the United States over the past 60 years, Altria, the parent company of Philip Morris and makers of the top-selling cigarette brand Marlboro.”

Presentation at the National Conference on Tobacco or Health
Chicago, Illonois
May 5th, 2005

“The New York Times ran a front-page story on 5 October 1994 entitled, ‘Philip Morris Calls in IOUs in the Arts’, at a time when the New York City Council was considering a bill that would ban smoking in virtually all public places in the city. Fighting back, the world’s largest tobacco company blackmailed the City, threatening to move its headquarters elsewhere if the bill passed, taking with them some 2,000 employees, and, by implication, all its arts support. ‘If the level of such corporate support, for whatever reason, were to decline, the statements of the company declared intimidatingly on September 28, ‘the quality and quantity of the dance, theatre, music and art exhibitions offered here might be diminished.’

“In desperation at the proposed bill, Philip Morris further urged arts organizations that they had funded to ‘put a good word with Peter F. Vallone, the City Council Speaker’, the main sponsor of the bill…

“Philip Morris is a very powerful presence in the art world,and none of the museum people whom I interviewed in May 1995 would dare to speak about the company’s actions. By dispensing money as widely as Philip Morris had been doing, the tobacco companies were buying the critical silence of arts bureaucrats and their institutions…

“This is the moment, I would argue, at which the ‘cultural capital’ accumulated by the corporation is transferred, in the most naked manner, to political power, at the service of corporate economic interests.”

End of an Era in Arts Funding 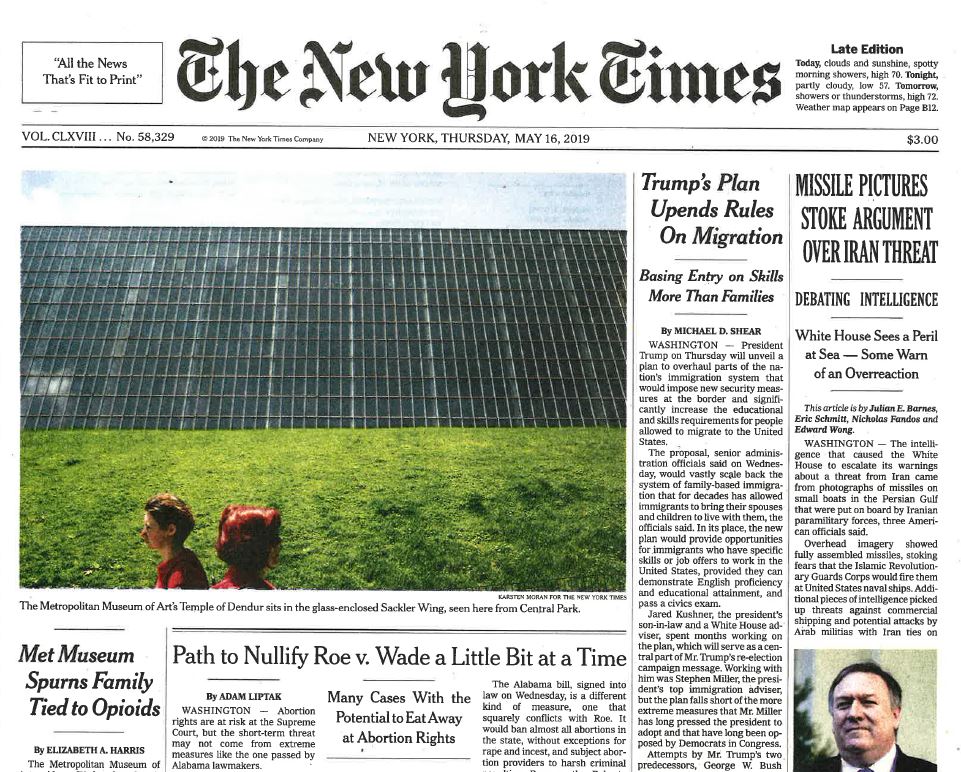 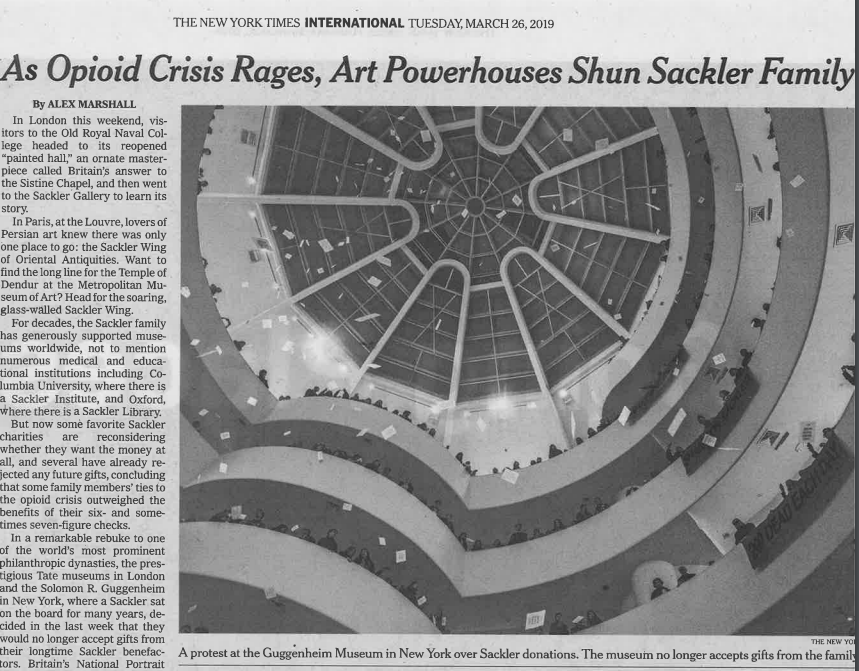 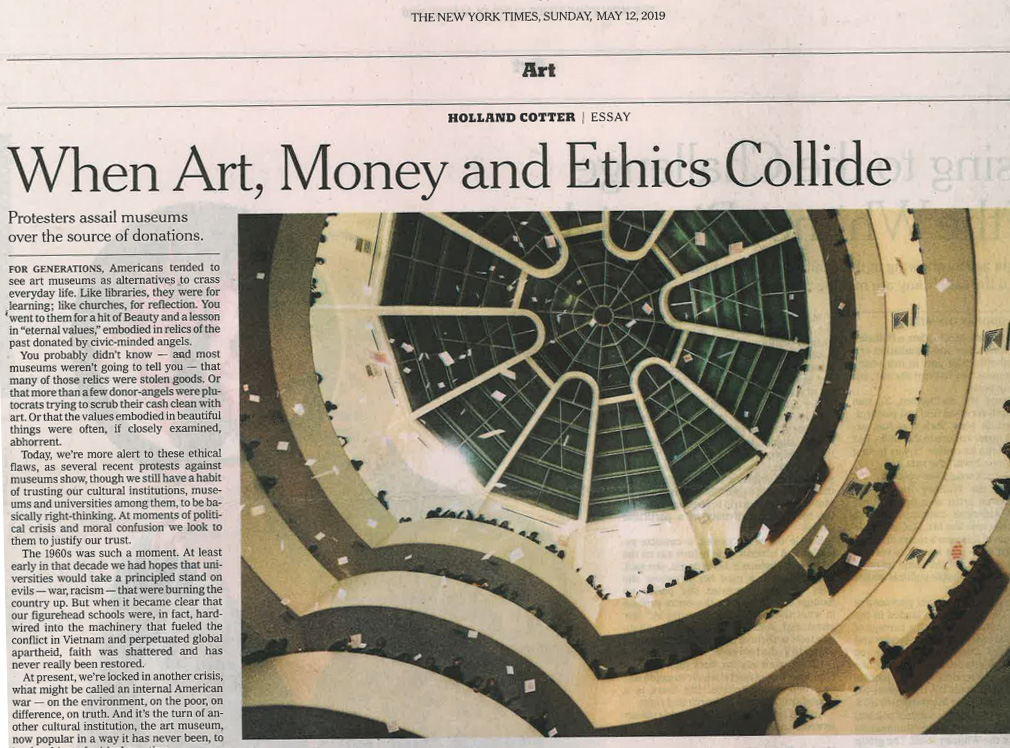 When Art, Money and Ethics Collide 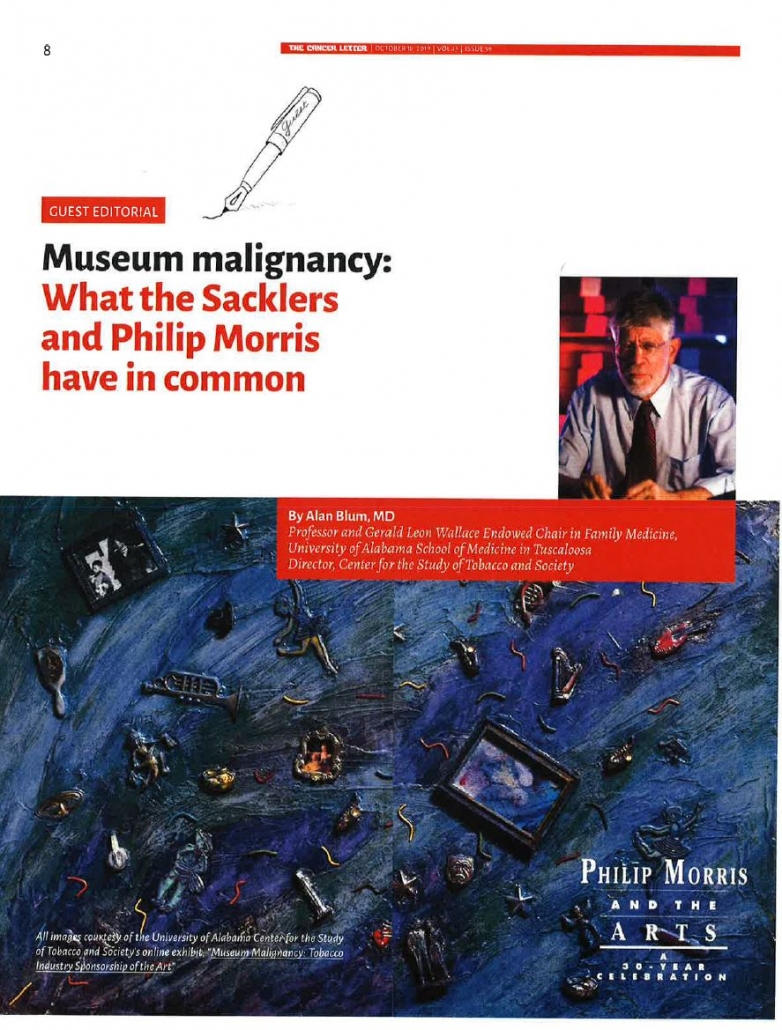 Museum Malignancy: What the Sacklers and Philip Morris have in common

“But the picture is further complicated, in my opinion, by the fact that Arthur Sackler was an arch-enemy of the tobacco industry, and from the 1960s to the 1980s he wrote numerous no-holds-barred editorials in his biweekly national newspaper for doctors, Medical Tribune…“