Exploring the Interface Between JUUL Addiction and
Digital Media Addiction

In 2000, Charlton and Bates hypothesized in the British Medial Journal that the decline in cigarette smoking among teenagers in the United Kingdom was a result of spending their disposable income on cell phones instead of cigarettes.1 Little did they realize, however, that teenagers might be trading one addiction for another. In 2007, Apple released the iPhone which rapidly became a ubiquitous consumer product. E-cigarettes were also introduced to the United States (U.S.) in 2007, and their use soared in 2015 after the introduction of JUUL, an ecigarette that resembles a USB flash drive. The brand has captured 75% of the e-cigarette market, and the rapid rise in the use of e-cigarettes by high school and college students has caused grave concern among health professionals, educators, and parents alike.2

The term digital media encompasses electronic devices, including television, computers, and cell phones. For this review, we focused primarily on cell phone use and the use of social media which refers to websites and applications (apps) that allow users to produce and share information. Facebook, Instagram, and Twitter are the most popular social networking sites in the U.S. based on active monthly users. Instagram and Snapchat are the most popular among college-age users.3 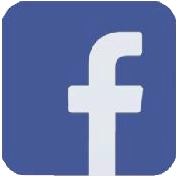 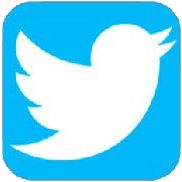 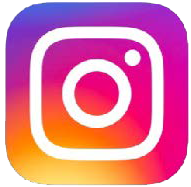 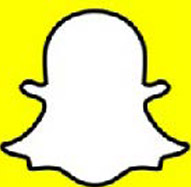 E-cigarettes are battery-operated devices used to inhale a vaporized liquid containing nicotine. Most resemble traditional cigarettes but can also be used to deliver vapor of marijuana (ecannabis). 4 The use of these devices is called vaping.

Cigarettes are the leading preventable cause of disease in the U.S., with the death toll of nearly 500,000 per year. E-cigarettes were invented as a way to reduce the exposure to the toxic chemicals of combustion and to aid in stopping smoking.10 One unintended consequence is that ecigarettes have been taken up en masse by adolescents who have never smoked, nor are e-cigarettes free of harmful chemicals. In 2019, vaping was found to cause severe lung injury.11 On December 4th, 2019, the Centers for Disease Control and Prevention reported that there have been 2,291 cases of vaping-associated lung injury, resulting in 48 deaths. But most of these illnesses appear to have been related to the use of THC containing e-liquids purchased online.12 There is no federal regulation of these products. 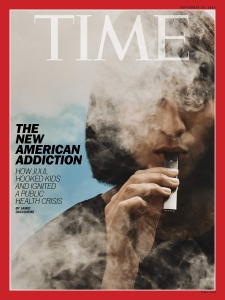 JUUL’s resemblance to a USB drive has made it attractive to a wired generation. The design was deliberate. JUUL was created by two graduate students at Stanford University with a twofold purpose: to look cool and to deliver nicotine more rapidly than other e-cigarettes. Although JUUL Labs, Inc.’s website claims that it is an alternative to cigarettes for adult smokers, the product has become controversial because of its extreme popularity among teenagers. 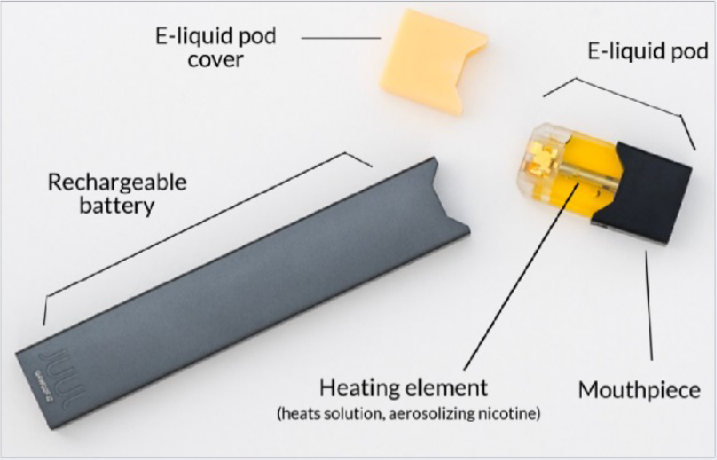 78% of teens check digital media devices at least every hour, and teens spend an average of nine hours per day on digital devices.14 E-cigarette use has escalated in the past ten years among teenagers, raising concerns about nicotine addiction and other adverse health consequences.15 16 11.7% of 12th graders report vaping daily and 40.5% of 12th graders report having vaped at least once.17 Of youth who have never used traditional cigarettes or e-cigarettes, those with the highest use of electronic devices are more likely to begin using cigarettes. 3 Digital media addiction and e-cigarette addiction appear to reinforce each other.

Social media platforms are an indirect way to promote e-cigarette use.18 43% of social media users report viewing a peer post about e-cigarettes through at least one social media platform in the last 6 months. Of these, 31% viewed posts on Facebook, 16% on Twitter, and 28% on Instagram.18 Commentary on these platforms is often accompanied by hashtags such as “#ecigs”, “#vape”, or “#juul”, creating a collection of posts that can develop into a community of users.19 Even posts that make fun of JUUL are a way to maintain its visibility and popularity. This can be especially problematic for teens who are trying to find a group of people they can connect with. The sharing of experiences on social media has the potential to reinforce social acceptability of JUUL use.18 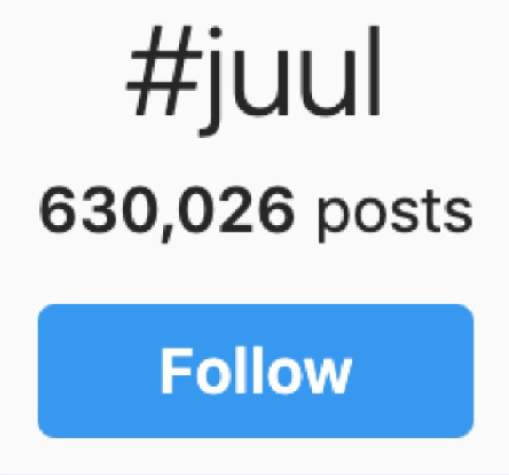 Social Media as a Source of Information 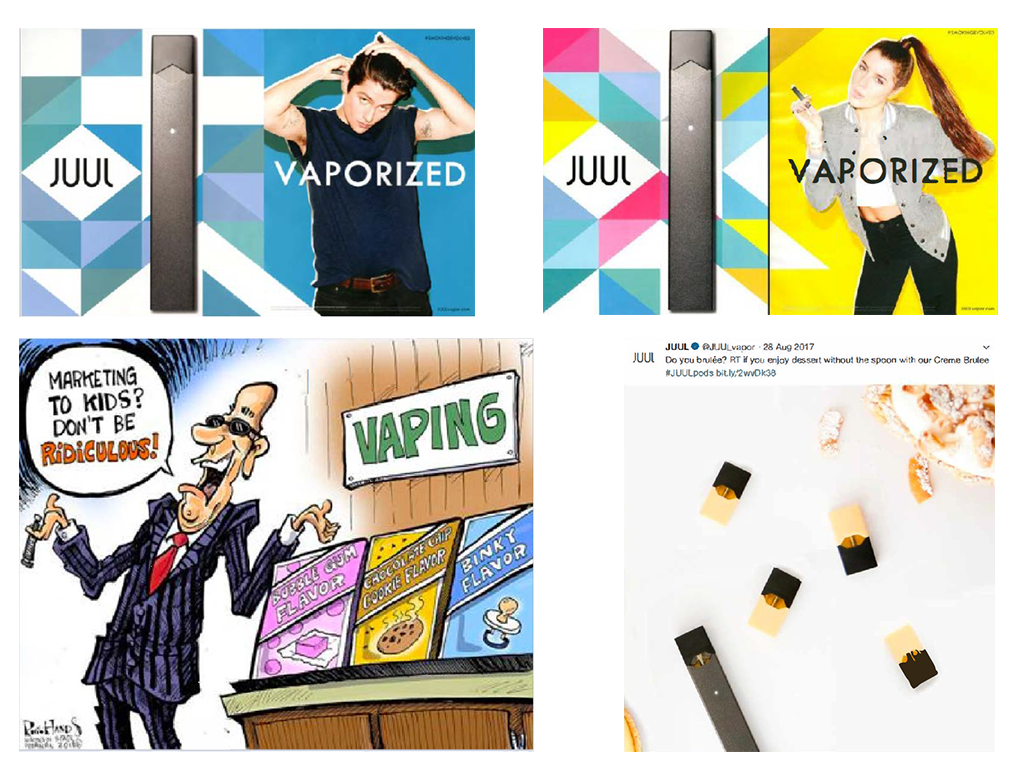 JUUL Marketing as a Source of Deception

Digital media have substantially replaced print media.21 Digital marketing involves new media such as social networking sites and brand websites. Marketing on digital media now far surpasses traditional marketing, especially for adolescents who have on-demand access to content and are active consumers of digital media.22 They are highly susceptible to media influence and are more likely to identify with and to model what they view, and e-cigarette companies are taking advantage of this.22 Since its inception, JUUL Labs, Inc. has heavily utilized social media, spending nearly half of its advertising expenditure on online marketing with a focus on Instagram advertisements.2 JUUL’s first advertising campaign was “Vaporized”, featuring young models and bright colors.3 JUUL also extensively promoted its variety of flavors such as mango and crème brulee, but in 2019 halted sales of pods with flavors other than tobacco and menthol due to public criticism. JUUL also ended its youth-oriented advertisements on social media. JUUL’s official Instagram page @juulvapor discontinued use on November 13, 2018. In 2017, almost half of social media users in 6th, 8th, and 10th grades recalled viewing an e-cigarette advertisement in the previous 6 months. Of these, 40% viewed advertisements on Facebook, 13% on Twitter, and 13% on Instagram.18 23 Exposure to e-cigarette advertising increases the likelihood of future initiation of e-cigarette use.24

Social Media as a Possible Remedy

An anti-JUULing movement has begun on social media using hashtags such as ”#ditchjuul”. The Truth website, established with funds from the Master Settlement Agreement, specifically targets young people. It was originally centered on ending cigarette and other tobacco product use but now focuses on JUULing due to its widespread use among teens. They utilize social media platforms to appeal to young people. 15 A new antivaping program, ThislsQuitting, is tailored by age group to give teens and young adults appropriate recommendations about quitting via text. The daily texts are specific to age and product that they are trying to quit, and 54,000 young people have signed up since its launch in January 2019.17 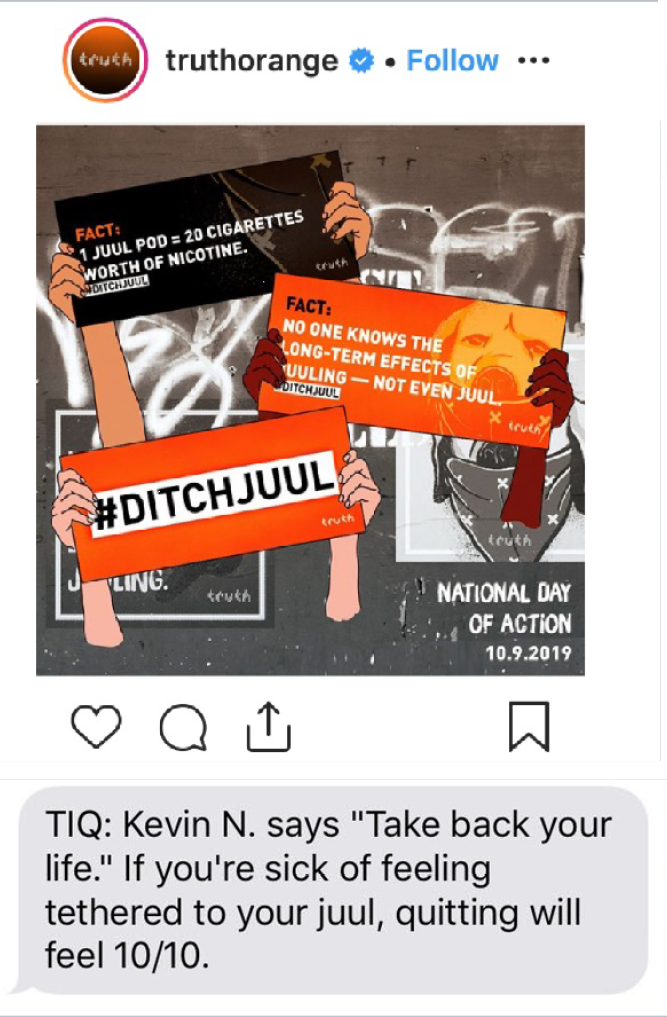 Just as fighting smoking means going after Marlboro, JUUL is by far the leading brand of e-cigarettes among college students and teens, and future efforts to counteract electronic cigarette introduction and habituation should be directed at counteracting the promotion of JUUL. Meanwhile, efforts must be made to reduce the number of hours per day that high school and college students spend on digital media. Overall, e-cigarette addiction appears to be more closely related to dependence on digital media than cigarette smoking.